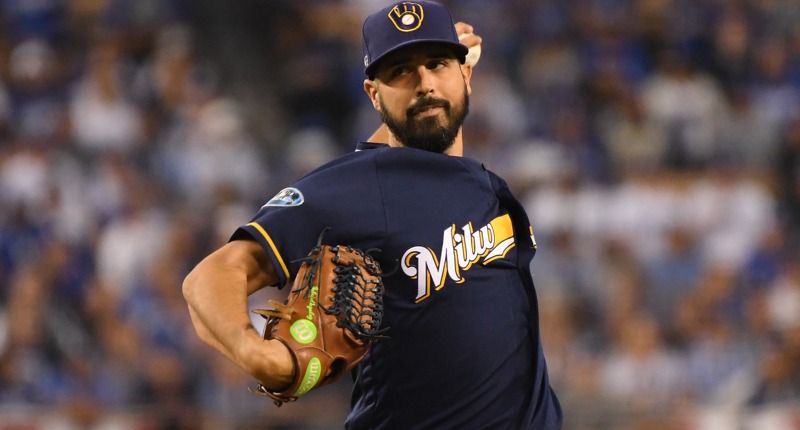 Well, with Christmas just around the corner, we knew this week would squeeze out some additional activity, and that’s exactly what’s happened (for everyone besides the Cubs, of course)!

Let’s start with the latest from the South Side of town, where the Chicago White Sox have inked a familiar name in left-handed starter Gio Gonzalez:

Sources: #WhiteSox closing in on a deal with free-agent pitcher Gio Gonzalez.

Gonzalez, 34, isn’t the guy he used to be (indeed, his fastball has lost about 4 clicks from his height with the Nationals), but he’s been one heck of an effective starter with the Brewers over the past year and a half (he’s been particularly dominant against the Cubs, so good riddance), including a 3.50 ERA (4.04 FIP) over 17 starts and two relief appearances last season.

And whaddaya know? He’ll be pitching to the same catcher, as Yasmani Grandal signed his free agent deal with the Sox earlier this winter.

I’m sure White Sox fans had their rotation sights set a little higher this offseason, but they already have some youthful upside in their rotation (Lucas Giolito, Dylan Cease). So a little veteran stability – in a proven battery – isn’t the worst thing.

Plus, Gonzalez has an interesting history with the organization:

The Gio Gonzalez White Sox journey is something.

Traded to Phillies in Jim Thome trade in Dec 2005.

Traded back to White Sox in Freddy Garcia trade in 2006.

Back with White Sox… https://t.co/31Tq2CLHky

As for the Cubs impact, well, there’s not much. The Cubs are thought to be shopping in this tier of starting pitcher, but Gonzalez never struck me as the guy they’d target.

Julio Teheran, on the other hand, did. And he just signed with Joe Maddon’s Angels:

The 28-year-old Teheran joins Dylan Bundy as right-handers who have joined the Angels’ staff this winter. Along with Andrew Heaney, Shohei Ohtani and Griffin Canning, they’re the likeliest five to be in an Opening Day rotation at present. Angels still could add pitchers, too.

Teheran, 28, is still quite young with a big prospect pedigree, but has never quite lived up to the promise of his early-career results. Moreover, his fastball velocity has been in a pretty steady decline for the last … always, resulting in graphs like this: 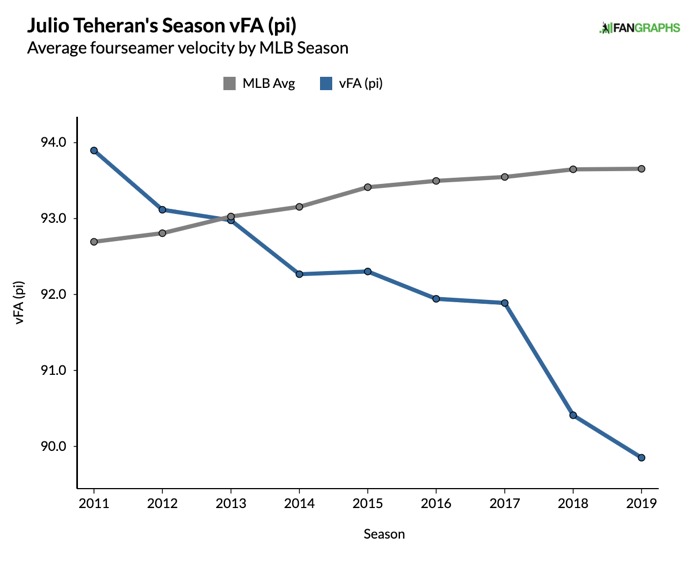 Would I have liked to see the Cubs take a gamble on his youth and former-ceiling on just a one-year, $9M deal? In another life, yeah, sure. But that graph and the general understanding of the Cubs financial position right now makes that desire easy to set aside.

With that said, the Cubs will need to add a starting pitcher (well, at least one) this offseason and this is – generally speaking – the level of arm/tier we’ve been expecting. Of course, we did just get further confirmation today that they might have some interest in Dallas Keuchel – and for what it’s worth, both the White Sox and Angels have been connected to Keuchel in the past. So perhaps this isn’t all a coincidence.

Moving on to our third and final free agent signing of the hour, the Royals have picked up Maikel Franco:

Maikel precisely gets 2.95M, plus 1.05M in incentives #royals

Franco, 27, is a young corner infielder who’s been with the Phillies his entire career … that is until he was non-tendered back on December 2nd. He’s had seasons of above-average offensive contributions in the past, makes a lot of contact (15.3% strikeout rate), and is usually good for a home run (102 in just 656 games), but he was non-tendered earlier this month for a reason – if you’re going to be stuck to 1B and 3B, you have to do better than the 70 wRC+ he posted in 2019.

Not unlike the Angels and Teheran, the Royals are taking the low-cost gamble on Franco’s youth and former upside, albeit for a significantly smaller guarantee. I don’t see much of a Cubs impact on this deal and I’m going to click publish, before another transaction comes through the pipeline.