Cubs Luxury Tax Payroll Check: Still a Hair Over the $208 Million Limit at This Point Skip to content

With the state of the Cubs’ luxury tax situation remaining of paramount import this offseason (le sigh), and with rumors swirling that necessarily lead us to do some mathefying with the payroll impact of trades and signings, I thought it was worth another check in on the state of the projected 2020 Cubs payroll for luxury tax purposes.

Here’s the updated payroll chart, broken down by category (thanks for the graphic, Michael). Note that the first tier of the luxury tax this year kicks in at $208 million, and that’s what the Cubs are almost certainly aiming – aggressively – to finish under this year: 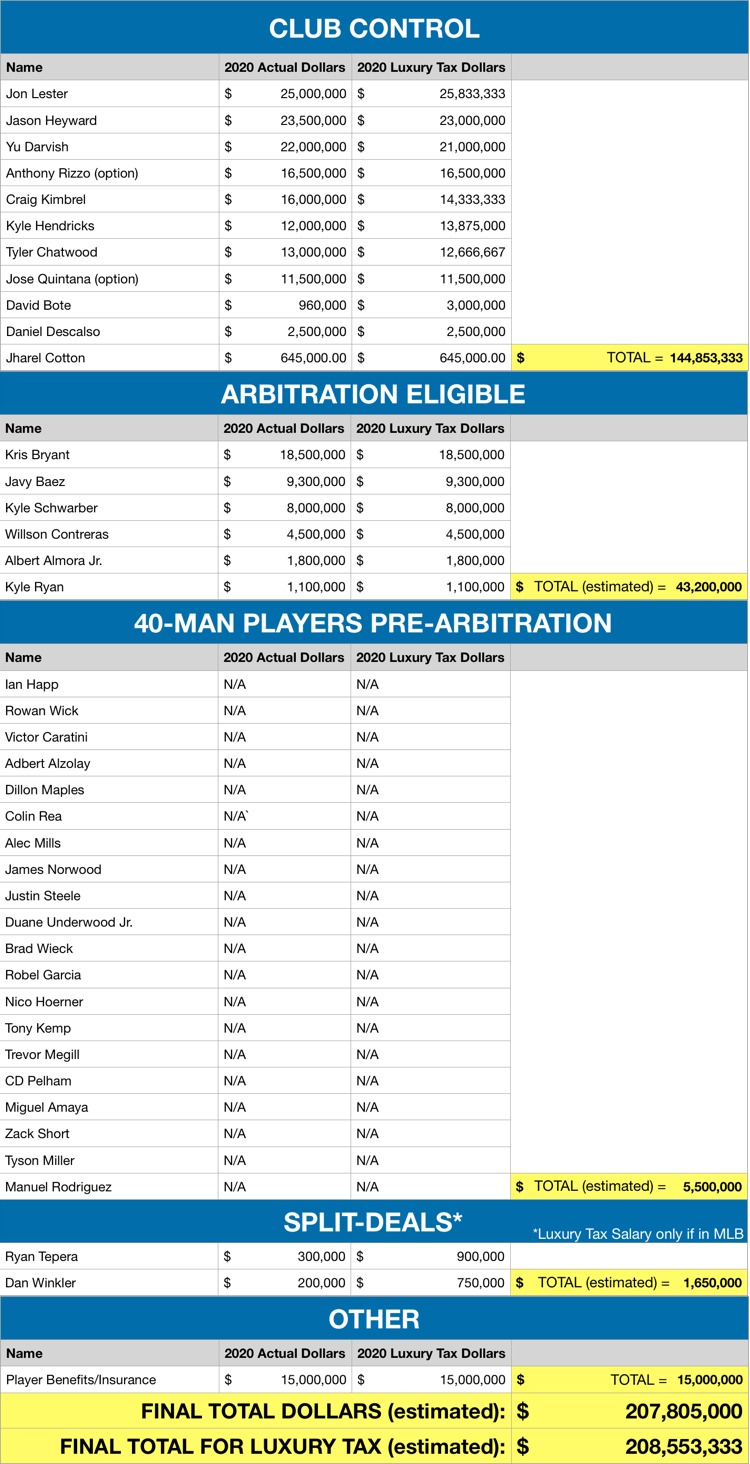 As you can see, our estimate has the Cubs just slightly over the luxury tax limit already, hence the zero guaranteed big league contracts signed this offseason.

Note that the current estimates leave *zero* built-in flexibility for in-season moves, nor do they have any flexibility for accrued bonuses during the season. In other words, realistically, if the Cubs want to be under the luxury tax this year, they have to CUT salary from here and not fully replace it. There’s no way around that reality if the Cubs are going to get under the luxury tax, and, by all outward appearances since September, they are definitely planning to do that.

So, then, you can expect a trade or two no matter what. Obviously Kris Bryant is going to be shopped regardless, but the Cubs cannot put themselves in a position where trading a star (and trying to get a good return) is their absolute only option to get under the tax. This is such an ugly spot to be in.

(A word on yesterday’s rumor about the Cubs and Nolan Arenado, and the series of moves that could make SOME sense. The rumor would have the Cubs sending Willson Contreras (approximately $4.5M AAV) and Jason Heyward ($23M AAV) to the Rockies for Nolan Arenado ($32.5M AAV), an INCREASE in the Cubs’ luxury tax payroll of $5M AAV. In conjunction, the Cubs would be trading Kris Bryant (approximately $18.5M AAV) for prospects and maybe young pitching, saving, let’s say, $17M in AAV. That, combined with the Arenado trade, would take them under the luxury tax by about $11.5M.

Then, to replace Heyward in right field and to compete in the near-term, the Cubs would re-sign Nick Castellanos. But, as you can see, if Castellanos gets a deal worth, say, a $15M AAV, then the Cubs are right back over the luxury tax by $3+ million … which they’d have to open up somewhere else, particularly given the need to be flexible for in-season moves and bonuses.

That is all to say: even a super creative, super complicated series of moves like we discussed yesterday STILL isn’t quite enough to accomplish the trio of goals to build for the future, improve in 2020, and get under the luxury tax. More creativity would be necessary.)