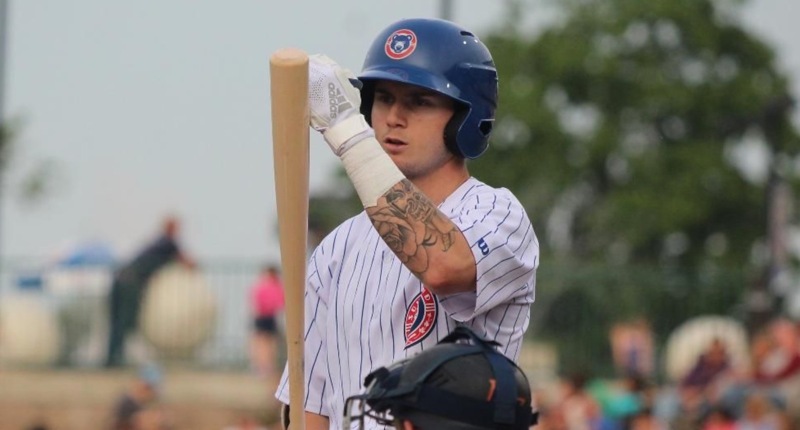 I think the hardest kind of season to evaluate is an average one.

Chicago Cubs outfield prospect Cole Roederer was an average Midwest League hitter in 2019, with a 101 wRC+ according to FanGraphs. For a teenager in a pitcher-friendly league, in his first full pro season, that’s a solid effort. But for a prospect that had built up high expectations, .224/.319/.365 can’t help but feel like a disappointment.

It has been difficult for me to find the middle, rational ground of analysis as a result. But let’s give it a shot.

Roederer, the Cubs’ supplementary second-round pick in 2018, felt like a smart pick from the beginning. A UCLA commit who dropped in the draft due to an injury in his senior season, a guy who jumped into pro ball and showed patience, power, speed. Things looked even better last spring when he homered in his first big league Spring Training game, and when the Cubs sent him to South Bend on Opening Day, the first high school pick they’d done that with during Theo Epstein’s tenure.

The tepid growth that followed in 2019 is really just a reminder that development usually does move slowly for high school draftees. For example, the South Bend-in-April assignment was a learning experience for a Southern California kid not used to frigid temps. He had a .606 OPS in his first 33 games, up to May 21. In his final 75 games, that jumped to .720. We’ll see if that tracks should he be promoted to the warmer Myrtle Beach climate, or if that was just a convenient set of arbitrary endpoints.

Some development that I’m quite sure was real came via his plate approach. Roederer drew 23 walks in his first 65 games, but then drew 29 walks in his final 43. The better at-bats, unsurprisingly, led to fewer strikeouts. 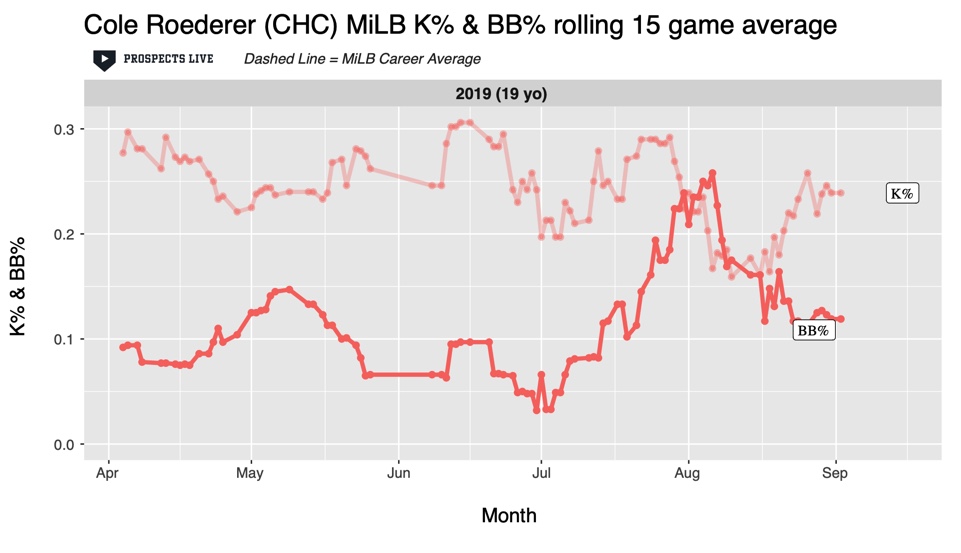 Roederer’s hand-eye coordination is too good to settle in as a 25-35% strikeout rate type of hitter. I think he was selling out for a power a bit early on, and honestly, I understood why. His natural power is among the system’s best, and my initial impressions of Roederer were that he’d need to settle in as a power-hitting left fielder ultimately. But buying into that “role” is dangerous – as we’ve seen with a guy like Kyle Schwarber, it can create some bad habits.

Roederer does fall victim to a lot of the usual problems that young left-handed hitters face. He struggles a ton against southpaws, with just a .179 slugging percentage in 67 at-bats last year. He loves attacking the high fastball, but with his uppercut swing, pitchers will look to exploit that at every turn.

And most of all, he gets pretty pull-happy, and in doing so, becomes too easy to game plan against. Roederer pulled an unfathomable 73.3%(!) of the ground balls he hit in 2019, playing right into the shift that teams are gradually using more and more in A-ball, and it led to a .198 BABIP(!) on ground balls. Some of that is simple bad luck, but some of that is an approach that needs widening. We saw this year what it did for Schwarber.

I have spoken with those internally who don’t view Roederer in that power hitter prism. They see him as a center fielder with the bat-to-ball abilities to spray around the field, but for whom power will be a natural byproduct of good at-bats. More the Jason Heyward type, less the Kyle Schwarber type. They actually see a .300 batting average as a likelier outcome than 30 home runs.

By body type, Roederer certainly looks more leadoff than cleanup hitter. He’s on the smaller side, and, while the Cubs will be hoping for another inch or two, will end up short. He’s not Heyward, he’s not Schwarber; think more like a slightly bigger Adam Eaton. Muscle development will be key, but the Cubs will also not want that to come at the cost of his athleticism. Roederer’s been a solid 29-for-38 on the base paths as a pro, and I thought he was surprisingly good in center field for South Bend. His first step got better over the course of the year, and he covers enough ground to hang at the position. His arm is limiting – it will probably be either CF or LF for him – but the range is not.

That body composition is extremely important as the Cubs develop Roederer’s offensive approach, as Sahadev Sharma outlined how physiologically-focused Cubs new Director of Hitting Justin Stone is. I suspect he’ll find Roederer to be a “loose mover” and will tailor his coaching to that. How that ultimately leads to the hitter Roederer becomes is one of the more fascinating subplots in the Cubs farm system the next couple years.

In 2020, I suspect Roederer will head to High-A Myrtle Beach and again split time in center field with Brennen Davis. It’s another difficult environment for a young power hitter, and again, merely surviving it will be impressive in its own way. But more important than the results will be more clarity in what exactly Roederer projects to be.