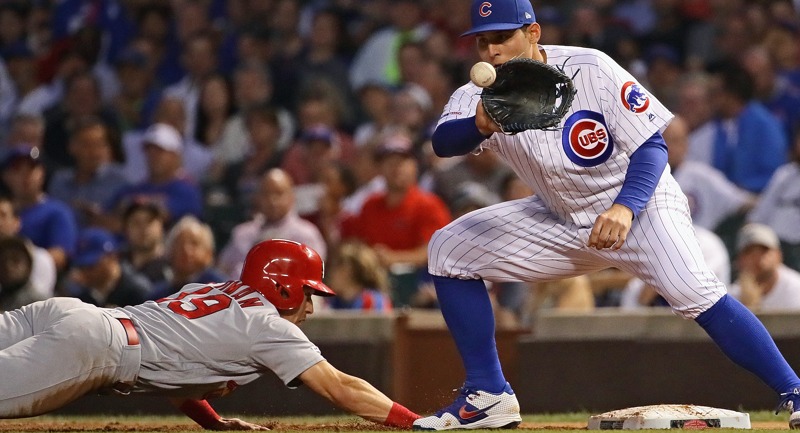 On the one hand, I know all new advanced stats – even the very best ones – experience growing pains. It’s just part of the process. They’re created, adjusted, tweaked, and re-released, providing some useful information in the meantime. Further, I know that advanced defensive metrics are among the least consistent in the sport (i.e. the least trustworthy and most subject to change).

But I wanted to be excited about Statcast’s new Infielder Outs Above Average metric … since it loves the hell out of Javy Baez, the best defensive infielder in all of baseball.

As a quick aside, I think we all had a gut feeling that Baez was one of the best defenders in baseball, but I gotta say, man … actually seeing his name listed ahead of the Arenado/Simmons/Ahmed/Story/Chapman (i.e. the famously sure-handed) – it just makes it so real. So validating. This is basically confirmation that all that “magic” we’ve seen from him over the years – the stuff we brag to the rest of the world about – isn’t driven purely from our homer-fueled hearts. He really is the most special.

Which is why it continues to be hilarious that he’s never won a Gold Glove award, let alone the fact that he wasn’t even a finalist in 2019.

It’s not all difficult for me to explain why Anthony Rizzo an EXCELLENT defender at first base. (1) He’s got three Gold Gloves and a Platinum Glove to support his case. (2) His 21 Defensive Runs Saved (DRS) from 2016-2019 ranks second only to Paul Goldschmidt at 1B, another famously good first baseman. (3) The eye-test on things like his ability to scoop, stretch, and charge/field the bunt are all up there with the best first basemen in baseball.

However, OAA doesn’t think he’s the best. Instead, it basically identifies him as one of the worst.

Like … what? No. So how do I square this new stat against what I know to be true? Well, everything we said up-top: new advanced defensive metrics have some kinks to work out. After all, when the number-crunchers applied OAA retrospectively, Rizzo ranked as the 9th best 1B in 2018 (+1) and 8th best in 2017 (+3) – and he was perfectly fine last year by DRS (7th in baseball) and UZR/150 (2nd in baseball) – which feels far closer to reality.

Then again, that leads to the question: Are we allowing our Cubbie-bias to blind us to some potential defensive slipping for Rizzo at first? It’s possible. Perhaps even likely as he enters his 30s, but I simply refuse to believe the drop was that dramatic. I watched all the games. That’s just not what happened.

Instead, I think it’s a good reminder that, when it comes to judging a player’s defense, the good old fashioned eye-test is still quite applicable … so long as you watch a large enough sample. After all, we KNEW Baez was being underappreciated because of what we saw with our eyes, not necessarily the defensive metrics or awards.

Now, with that said, I absolutely LOVE new stats like OAA because just as they might help validate one of our opinions, they also force us to confront some other, potentially harsh realities.

Look, there’s no way I suddenly think Anthony Rizzo is a bad defender. He’s not. But I am now open to considering that, as he’s crossed over into his 30s and has continued to deal with some back issues, the defense – in the aggregate – could be taking a slight hit. That doesn’t mean he can’t still be excellent, while taking home a few more Gold Gloves before all is said and done. But it does help us understand the makeup of the Cubs infield defense, and thus overall team, a little better.