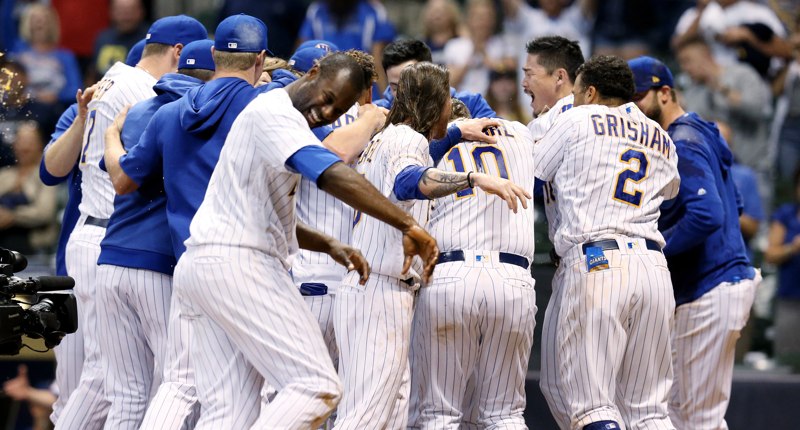 This weekend, the Milwaukee Brewers made another addition to their infield, bringing in Jedd Gyorko on a one-year, $2 million deal (plus 2021 option).

The signing elicited the usual jokes, given Gyorko’s brutal 2019 season, but he was actually a pretty useful player for three years in St. Louis from 2016 to 2018. And that seems to be what the Brewers have gone for in their infield this year, trying to replace the departed Mike Moustakas, Travis Shaw, and Eric Thames: sheer volume of useful players.

So far this offseason, the Brewers have brought in infielders Gyorko, Eric Sogard, Ryon Healy, Luis Urias, and Justin Smoak – none are everyday starters, let alone star contributors, but all of them can be useful when healthy and deployed in a certain way. Pair that group with returners Keston Hiura, Orlando Arcia, and Ryan Braun, and you’ve got eight guys for four positions, almost all of whom can play multiple spots and would theoretically be much better in certain match-ups than others.

It is an extremely weird, extremely volume-heavy, extremely match-up-reliant use of your infield spots and your bench.

So now, when they proceed with a mish-mash of meh infield options to coordinate all over the field, who am I to say for sure it won’t work this time, too?

President of Baseball Operations David Stearns summed up the way the Brewers approached the infield, after adding Gyorko (Brewers.com): “When you look at the totality of options on our infield now, we are comfortable. We’re never going to stop looking to get better, and that’s true throughout the entirety of our roster. But we are comfortable with the grouping we have right now …. We feel like we have a number of players who fit in a variety of different ways, and that’s really helpful. It gives us options. It gives us depth. It allows us to see not only how the rest of the offseason unfolds, but how the first part of the season unfolds, in terms of how we want to structure a roster, how we want to play different players. It really gives Craig [Counsell] the ability to mix and match depending on who we’re playing.”

You could almost see him shrugging his shoulders as he said all that – we’re throwing a bunch of stuff at the wall and seeing what will stick … but probably some stuff will stick.

Were the Cubs doing something like this, I’d worry about the time it would take to get the match-ups right, to really get a sense for how it all works together, and how many early-season games you’d lose in the meantime. I’d worry about injuries leaving you with just meh starters instead of a large group of meh that you can coordinate into something good. I’d worry that cheap, borderline guys become cheap borderline guys because they might not actually be any good.

That all said, I can’t cast too many stones. The Brewers had to do *something* to cover the infield, and they’ve certainly given themselves an option to be interesting. Of course, it’s possible that Hiura and Urias and, say, Sogard wind up taking most of the starts at second, short, and third base anyway when all is said and done. Again, the Brewers have given themselves lots of options.