David Ross Speaks: Expect Bryant to be There, Happy with His Roster, Not Worried About Leadoff, More Skip to content 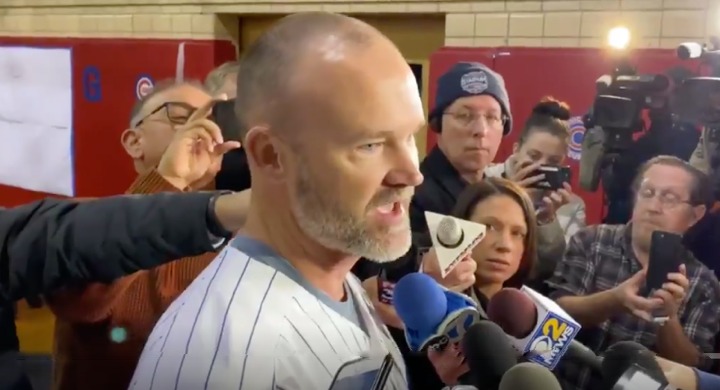 Oh, yeah! The Cubs named David Ross manager of the 2020 Chicago Cubs. I almost forgot. It feels like forever ago.

Today, the Chicago Cubs are participating in a day of service, supporting youth programs and schools around the city, which is obviously a great thing to see:

Cubs community service day starts off with staff and some players packing up $115,000 worth of baseball gear for 50 youth organizations and schools. pic.twitter.com/DVluvXhAJm

But on top of the good deeds and karma this day of service is putting out into the universe, we also get some new offseason commentary from Cubs manager David Ross, who was in attendance. Of course, this isn’t the first time we’ve heard from Ross in an official Cubs-manager capacity, but it is the first time in a while – so I thought you might want to check it out.

Here’s what we’ve got so far:

David Ross says “I think fans should expect” Bryant to be with Cubs Opening Day. pic.twitter.com/KKvh8dBoB8

In short, Ross says the fans should “expect [Kris Bryant] to be there” on Opening Day, which will probably turn some heads – given the prevailing rumors – but of course, there’s nothing else he could say in that moment (and it’s entirely possible Bryant does stay put!). In any case, that *must* be the public line from the Cubs manager right now, so take it for what it’s worth.

Also, note that he expects the front office to continue to explore possible moves, so obviously things can still change on that front. Luckily, Ross says he spoke with Bryant recently, who says he’s in a good place, and given the circumstances (his name has been thrown around a LOT this winter), that’s good to hear.

Speaking of which, here’s Ross’ optimistic take on the lack of action so far this winter (from the Cubs):

Ross on lack of moves: pic.twitter.com/9IPKW9KUVl

“The lack of moves excites me,” is a funny way to attack the wide-spread criticism of this offseason, but I kinda love that mentality from Ross. Basically, he thinks his team is so good that he’s HAPPY there weren’t any improvements. Which, LOL … okay. I’ll give it to him (we’re grading Ross on a curve here, but I kind of want to, given that we’re exactly 0 games into his managerial career and I like him a lot).

And, yes, obviously, you hope your team improves every single offseason – and they should – but if that’s not going to be realistic, this sort of happy-warrior mentality from Ross is at least endearing.

Perhaps more importantly, I’m happy to hear him publicly concede the broader team roster decisions to Theo Epstein and Jed Hoyer, whose speciality that is. Addressing those matters in this format can really only lead to trouble. I really do think that Ross has been nothing but successful in his first few months in terms of dealing with the media, and that’s a very good thing for a franchise that’s gone through some rocky moments off (well, and on) the field over the past 1.5 years.

Ross on ramping up with the team, but not quite reaching the point of, say, opening day lineups:

There isn’t video of it yet, but Ross apparently also addressed the leadoff situation, saying he’s “looking at that heavily,” but thinks the Cubs have enough talent to win regardless of whether they have a permanent leadoff batter.

So I guess, yeah, take it seriously, but without any additions … what’s really going to change?

Ross says he’s spending a lot of time looking at the lead off position. Have to do your best with the roster you’re given, he said.

Ross: “if you’re looking for a negative mindset, it’s not going to be me.” pic.twitter.com/BfIHrcbYjM