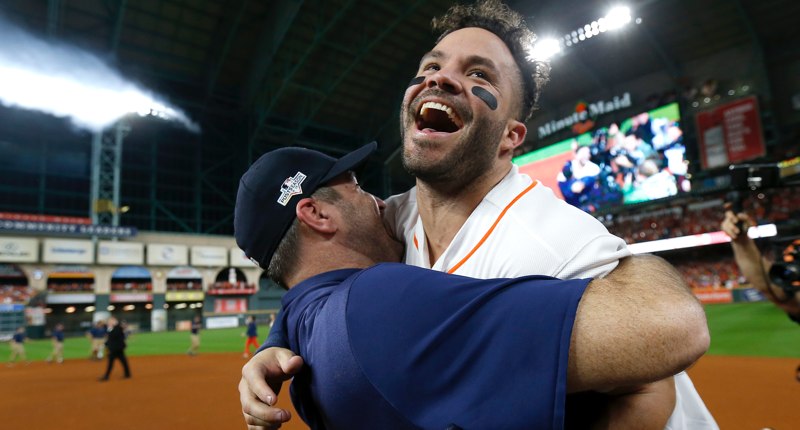 Although the Astros were hammered by MLB at an organizational level for electronically stealing signs in 2017 (and probably more), and although it cost the jobs of three managers and a general manager, actual Astros players who cheated – or who benefited from the cheating – have gone unpunished.

And it seems the other players around baseball are pretty pissed about it, and have just been waiting for the opportunity to unload.

Well, it happened today, and man, it got weird.

It started with a tweet from Jomboy, who actually played an instrumental role in uncovering video evidence of the Astros’ trashcan banging system, and who was among many who had previously hinted that some Astros players had gone as far as to have electronic devices on their body so they could feel buzzes when certain pitches were coming.

Jomboy’s tweet was a screenshot from someone who had previously seemed to have inside information about Carlos Beltran’s doings (supported by Trevor Bauer) – and that someone threw Alex Bregman and Jose Altuve straight under the bus:

I’ve heard this from multiple parties too, for what it’s worth… https://t.co/zDlp0x4bKs

Of course, that was quickly followed by a Beltran family denial that this person is actually a niece … except it probably isn’t a literal niece, and instead is a player burner:

That was enough for the internet sleuths to go find any evidence they could of buzzers (and also point to Jose Altuve’s stern warning to his teammates not to tear his jersey off of him after his game-winning homer in the ALCS). One of the sleuthers? Tommy Pham:

To my eye, by the way, that doesn’t really prove much of anything, though obviously it is a little suspicious given the rumors. Altuve, through his agent Scott Boras, offered an extraordinarily strong denial tonight to SI: “Jose Altuve called me and said he wants it known that he has never, ever worn an electronic device in a major league game—ever. He never received any form—of a trigger or any information—via an electronic product that was on his body or in his uniform. He has never worn any electronic device. Ever.”

That isn’t going to stop players from being pissed about another extremely serious, and extremely bizarre allegation:

For the sake of the game I Hope this isn’t true.. if true, there needs to be major consequences to the players. That Completely ruins the integrity of the game!!!

AMEN!!! The fact that there hasn’t been any consequences to any players up to this point is wild. https://t.co/zjgsJuuQlK

This is crazy. Truly can’t believe all this shit coming out in baseball. Just going to sit back and see how it all plays out. I know my thoughts but those will stay internal. I’ve learned that “no comment” is the best option at times! Lol

I doubt this weirdness is over, and, if nothing else, it’s beautiful fun for the schadenfreude.