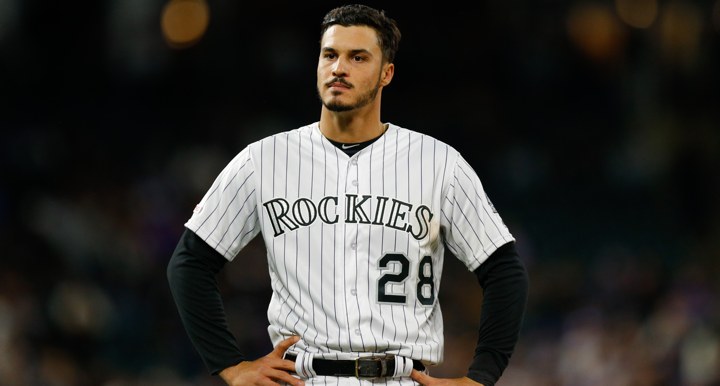 It took all of a few hours for the Rockies’ declaration that Nolan Arenado wouldn’t be traded to completely implode. Now? It’s right back to being extremely possible he’s dealt before Spring Training, and it could be pretty spicy in the interim.

Your basic bit of background here, as far as we know it: Nolan Arenado has been THE face of the Rockies since he debuted seven years ago. A year out from free agency last year, he signed an eight-year, $260 million extension, which includes an opt-out after 2021 and a full no-trade clause. Last season, the Rockies were not competitive, and Arenado expressed concern that it felt like a rebuild, and that’s not what he expected.

Then, this offseason, the Rockies started entertaining trade offers for Arenado, despite his contract, while simultaneously not signing a single big league free agent (the Cubs are the only other team in that category). Again, sure has the feel of a rebuild.

Nevertheless, those trade talks didn’t go anywhere, and yesterday, GM Jeff Bridich basically said that chapter was closed, and no trade was happening.

In response, Arenado offered cryptic words of extreme frustration about the front office:

Just heard again from #Rockies 3B Nolan Arenado, who wanted to make sure his statement was clear: "I'm not mad at trade rumors. There's more to it than that." As my story said, he didn't comment on specifics of feeling disrespected but wanted to be clear it wasn't the rumors.

I reached #Rockies Nolan Arenado tonight. He told #Denver7, GM Jeff Bridich is 'Very disrespectful,' and that he feels 'crossed' over multiple issues. It has cast doubt about his future in Colorado and questions if the relationship can be repaired: https://t.co/9v4UdFo4DB pic.twitter.com/Wg78EN2eFI

On first blush, you might see this as Arenado being pissed that the Rockies *aren’t* planning to trade him, but it’s a bit more complicated than that, as laid out by Jeff Passan:

News: The latest on the frayed relationship between star third baseman Nolan Arenado and the Colorado Rockies — and how the Rockies' inaction this winter after an awful 2019 have led to a feeling of betrayal and the potential for a trade.

In other words, it seems like Arenado is OK with being traded if the Rockies aren’t going to try to win in 2020, but that hasn’t been the same thing as him wanting to be traded. Then the offseason kept playing out with no action by the Rockies – who knows what they told him privately about their plans when he signed his extension – and it reached a point where Arenado is fed up, especially after his GM went out there to talk about him definitely being back with the Rockies in 2020.

For all we know, it had reached a point where Arenado kinda was hoping for a trade, and now he knows that the Rockies’ demands in trade were completely unrealistic (maybe by design). As Passan hears it, the requests were “ridiculous.”

As for where this could go if Arenado is pushing his way out the door a la Giancarlo Stanton with the Marlins, the teams rumored to have talked to the Rockies this offseason include the Cubs, Cardinals, Rangers, Dodgers, and Braves. Because of Arenado’s contract, the Rockies simply could not get much in return for a trade, and because of his no-trade clause, Arenado can dictate where he would want to be traded. If there is still public sparring and rumor speculating come Spring Training next month, get ready for all kinds of awkward interactions.

As we’ve discussed before, there’s a scenario – the math works – where the Cubs could trade for Arenado, trade away Bryant, and then sign Nick Castellanos, leaving themselves better set up for 2021 and beyond, under the luxury tax for 2020, and arguably more competitive in 2020, too. But it’s important to note that pulling that off would require the Rockies to take back a lot of salary (for example, Jason Heyward’s contract), and the Rockies probably only become interested in a deal like that if they wind up in a spot where they absolutely have to deal Arenado and he absolutely won’t go anywhere besides Chicago. I’m not sure we can say that either of those things is, or ever will be, true.

Frankly, I’d be much more concerned at this point that the Rockies will find themselves backed into a corner – as the Marlins were with Stanton – and the only team with a passable offer where Arenado will accept a trade is St. Louis. If that happens, the Cardinals could wind up landing a superstar for a song. It’s a very good guess that the reporting right now that previous demands by the Rockies were unrealistic are probably coming from the Cardinals, the only team with whom the Rockies reportedly exchanged names. Because of the contract, the Rockies cannot expect to get much in a trade for Arenado without eating a ton of the deal *AND* working around the opt-out *AND* getting Arenado to forgo his no-trade clause.

… but if you’re convinced Arenado does not want to be here, and if you can stoke those flames in the media by initially making huge demands in trade and then walking things back (putting the blame on Arenado for wanting a trade), maybe you can thereafter justify trading him for a modest cache of prospects and big leaguers. We Cubs fans are paranoid by nature, and I’m just saying, at a gut level, I get pretty nervous seeing how this whole thing has played out, and thinking about how plausible it is that it could lead Arenado to St. Louis for a bargain.

Here’s hoping that not only does that not happen, but that if the Rockies are forced to move Arenado, he’s interested in the Cubs and they explore ways they could make it work before it’s too late.