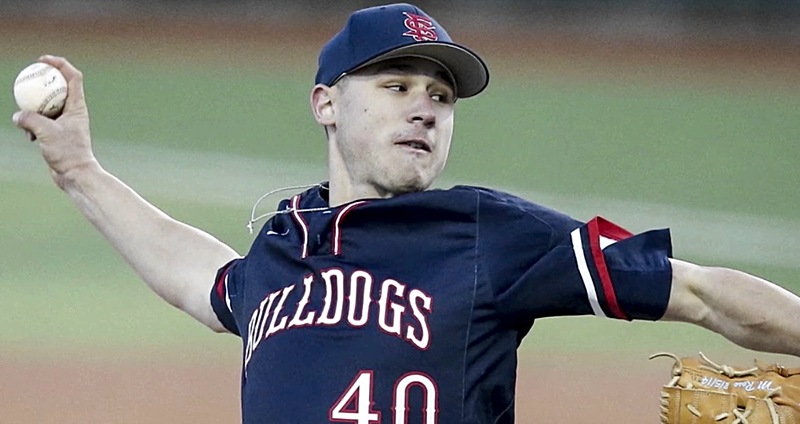 Ryan Jensen’s agent told him that he’d never seen anything like it before.

Here’s a kid, he doesn’t start pitching until his junior year in high school. Athletic, loose arm, gets a scholarship to Fresno State. Allows more walks than strikeouts in his freshman season. Gives up 11.1 hits per nine innings as a sophomore.

“Those first two years were definitely rough,” Jensen told me. “I had the velo, I just didn’t know where it was going.”

There’s not a person alive that had Jensen, whom the Cubs selected 27th overall in 2019, as a day one pick a year ago. But Jensen really impressed his coaches in the fall, earning the Friday Night ace designation. On March 8, the Bulldogs traveled to Tennessee, and Jensen was pulled after eight runs in two innings.

And that’s when everything changed. The meteoric rise the likes his agent, and many in the industry, haven’t seen before. Fresno State would win 34 of their next 45 games, and Jensen would go from just another California hard-thrower to the highest drafted pitcher west of the Rockies. Here’s the statistical reason why: 10 wins, 0 losses, 81 innings, 68 hits, 2.22 ERA, 20 walks, 86 strikeouts.

“It was something like I’ve never experienced,” Jensen said. “It just clicked for the whole team and everyone was rolling.”

While the numbers make you think something magical flipped, Jensen was quick to credit the Fresno State coaching staff for his long-term development. He says he went to Fresno State as a stiff, mechanical pitcher with a four-seam fastball and little else. In his freshman year, he learned a one-seam fastball, and he started to get the ridiculous sink you see here.

Ryan Jensen 95 mph 2-seam fastball on Friday, drawing a sword from the batter. This thing has some late life, huh? pic.twitter.com/yVRAqRXuZU

In his sophomore season, Jensen added the velocity (which has kept creeping up, to 99 mph during the summer with short-season Eugene). And in his junior year, the fastball command locked in, and Jensen became the ace that earned the Cubs first round selection.

Look, I think you’re going to read certain questions about Jensen until the day, if it comes, that he proves doubters wrong. A two-pitch guy (fastball/slider) who is too small will end up in relief. Jensen rejects that second part.

“I think I’ve proven myself,” he says. “I’ve held 97 for the whole game at six foot. I’m not sure height matters the same way anymore.”

As for me, it’s the idea of Jensen as a two-pitch guy that I reject. For certain players, we need to stop pretending that two-seam (or one-seam, in this case) and four-seam fastballs are the same, when the varying effect they have on a hitter is arresting. Jensen’s sinker and heater aren’t at all similar, and while he will need a more reliable change up (a pitch that has been his focus this offseason), it’s just not accurate to say he throws only two pitches.

At times during his pro debut, Jensen says, those two fastballs were the only pitches he would throw. Jensen knew he was on a pitch count of just forty or so pitches, and the Cubs were behind the scenes making small (and secret!) alterations to his slider.

“I felt like an opener only going out for one inning or so.”

That is likely to blame for the overthrowing that led to some command issues in the debut, 14 walks in 12 innings, eight of which came in his final two outings, probably leading to getting shut down in mid August. The stuff was there – he struck out a third of the batters he faced – but the command will need work.

Jensen took about two months off throwing, but is back on the mound and focusing on fastball command.

The Cubs’ gamble here is that Jensen’s plus athleticism will allow him to make the necessary in-game adjustments to keep his command where it needs to be. They’re gambling that his ridiculous arm speed will continue to produce high 90s velocity (with life!) in the middle innings. They’re gambling that his slider, with its natural good spin and feel, will be a deceptive out pitch in the upper levels under their tutelage. And they’re gambling his ability to be coached will only open the doors for more things to come. Just look at what the slider looked like after some slight alterations:

Here were my four favorite pitches of the outing, each against a different hitter. Slider, fastball, slider, fastball. pic.twitter.com/DOyF6xllnQ

Spring Training will decide whether Jensen, 22, opens the season in High-A Myrtle Beach or Low-A South Bend. I’d bet on the latter, with the hope that he’ll earn a midseason promotion. There’s no rush with Jensen, but the Cubs are betting his late amateur breakout is just a sign of things to come. The Cubs are intentionally taking bigger swings on the pitching side of things, and Jensen fits the bill perfectly.