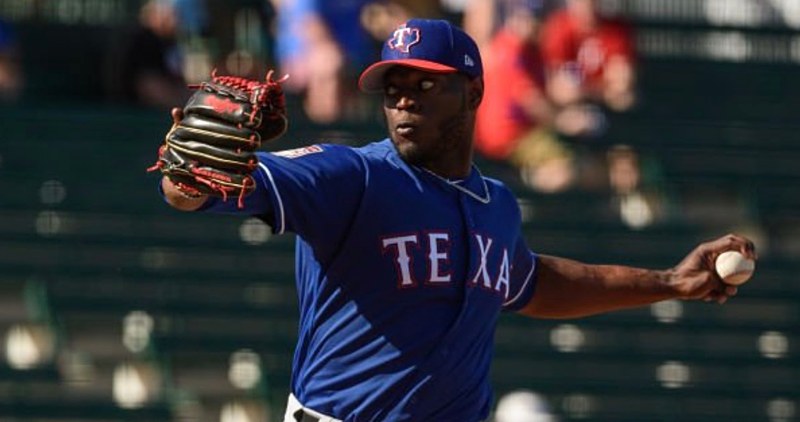 As we were talking about the huge volume of intriguing (but far from certain) arms the Cubs have added this offseason, I was thinking about how – unlike a typical offseason – the Cubs have yet to try to sneak any of the guys on the 40-man through waivers. Usually, they would have tried that dance a couple times by now.

And just like that, they did it today with hard-throwing lefty CD Pelham.

Lefty CD Pelham, who was claimed off waivers earlier this offseason by the Cubs, has cleared waivers this time around. Per the Cubs, he's been sent outright to Triple-A Iowa, dropping the 40-man roster to 39.

The Cubs snagged the 24-year-old Pelham off of waivers from the Rangers back in November as a pure scouting play. The 6’6″ beast of a dude can throw near triple digits, but he has yet to command it effectively. He’s the perfect guy to get into your org and see if a tweak or two turns the command around (you can’t necessarily teach 100 mph, but you might be able to teach some command techniques). Still, because he’s so risky, you might not want to use up a 40-man roster space on him all year – thus, the waiver.

With certain guys who are less likely to be impactful in the big leagues this season, but whom you still want in your org, you do this dance: claim them off of waivers from a team that needed to open up a 40-man spot at the time. Then, you wait. Then, when you perceive the time is right, you waive the guy yourself, seeing if YOU can get him through waivers. If you succeed, you get to outright him to AAA, opening up a 40-man spot, but keeping that guy in your organization for one year on the equivalent of a minor league deal. Then, if and when you decide to call him up, you simply put him back on the 40-man roster. If that time never comes, you make a decision on whether you want to keep him or let him become a minor league free agent at the end of the year.

So, then, this is very modestly good news for the Cubs today: they get to keep Pelham, but now they have a spot opened up on the 40-man again. They could use that for a big league signing (LOL!) or another waiver claim/minor trade at some point.