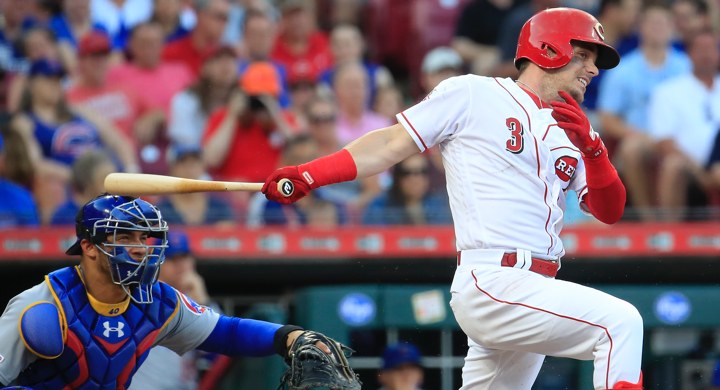 Way back in the early part of the offseason, when the hypothetical road ahead looked very different and we didn’t have a great sense of the 2020 Plan (trade pieces to brighten the 2021+ outlook, get under the luxury tax, add some low-cost short-term pieces to see what happens in 2020 without compromising the first two things), Michael wrote about the Cubs’ options at second base. Interestingly, three months later, the fit is still there even after we’ve come to realize what the Cubs are looking to do.

Specifically, Michael wrote about a couple adult guys named Didi and Scooter. The idea was to bring in a short-term veteran bridge to Nico Hoerner at second base, though half was quickly scuttled when Gregorius signed a one-year deal with the Phillies. He was the pricier and more certain option.

But Scooter Gennett is still out there with his lefty bat, and the Cubs are apparently interested:

One thing that has almost certainly changed on the Gennett front since early November: whereas he may have had hopes for a short-term, bounce-back, big-league deal with a nice guarantee, it’s possible the market has since shown it’s just not gonna bear it for a guy who was sooooooo down in 2019.

So that’s kinda the good and bad in a Gennett pursuit. Even if you allow yourself to accept that the Cubs are only going for cost-effective deals at this point, and even if the Cubs were to – for example – land him on a minor league deal, you have to recognize that there’s a reason for that. For as much as he was on the upswing in 2017 and 2018, the 2019 season was a disaster of the highest order:

It wasn’t just that 2019 featured injuries and bad results, it’s that the season stunk horribly in precisely the ways that had you concerned about the legitimacy of Gennett’s breakout in the first place!

Among the concerns you would have had before 2019: the strikeout rate is trending up as he sells out for more power, there are no walks, the overall offensive production is heavily dependent on a BABIP that didn’t show as elite before 2017, there was a huge jump in his HR/FB ratio that was hard to know if legit or a fluke, enormous career L/R splits that had only stabilized one time in 2018.

And what happened in 2019? The strikeout rate exploded, the walks completely evaporated, the BABIP returned to normal, the HR/FB ratio cratered, and the extreme splits returned. Everything was bad, and it was all bad in the ways you would have feared in the first place.

Thus, a guy who was on track for a nice multi-year extension with the Reds wound up dumped on the Giants and never recovered. At age 29, he’s now likely looking at a minor league deal to try to win a job, maybe as a platoon second baseman.

The plus sides here are that Gennett is probably average defensively at second base, and the huge platoon split might make it slightly easier for him to bounce back against righties (even if he becomes unplayable again against lefties). Prior to 2019, the one thing that had looked good was a steady increase in hard contact and fly ball rate – he was doing the things you were supposed to do in the juiced ball era.

If you bring in Gennett, you’re hoping that his 2019 season was completely derailed by a severe groin injury (and perhaps the trade, and the looming specter of a free agency squandered), and that what he showed in 2017 and 2018 were actually bits of replicable progress. Might as well take a chance that 2019 was an erasable fluke, rather than the years that preceded it.

That said, you’re probably not going to get that particular version of Gennett, and instead, like I said, you’re hoping he could emerge as part of a second base platoon (the left-handed bat that Daniel Descalso was supposed to provide, for example). On a minor league deal? Why not? He can compete with Descalso and Carlos Asauje to be the lefty for that spot. And if someone else like David Bote or Nico Hoerner proves too good to not start every day at second base, maybe Gennett offers a quality lefty bat off the (larger) bench.

Given the 2020 Plan, this is the kind of roll of the dice that is appropriate for the Cubs. It doesn’t excite me, but it’s fine.