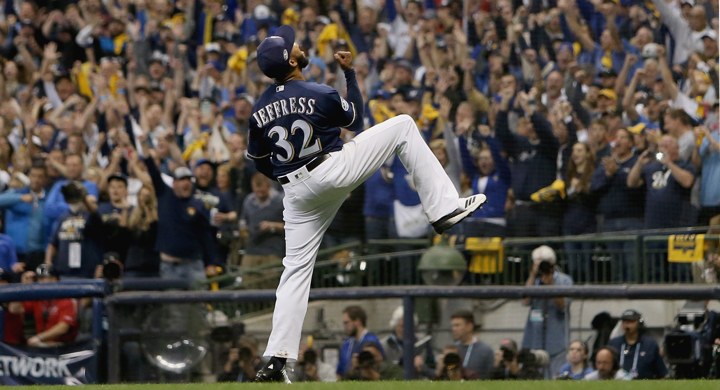 Hey, it’s another actual big league signing for the Cubs (well, I say “another” pending the finalization of the Steven Souza Jr. deal), as Jeff Passan reports the Cubs are bringing in former Brewers reliever Jeremy Jeffress.

Reliever Jeremy Jeffress and the Chicago Cubs are in agreement on a one-year, $850,000 major league contract, sources familiar with the deal tell ESPN. Jeffress can earn an additional $200,000 based on games pitched.

Jeffress marks the Cubs’ first big league contract added to the bullpen mix, but largely follows the path they’ve already laid out this offseason: get as many guys in the door who could be good, and let it sort itself out in Spring Training and in the early part of the season. Of course, with a big league deal, Jeffress has the inside track to a regular gig.

Jeffress, 32, has split time between the Rangers (ah ha!) and the Brewers (bring the Cubs that inside info!) over the past five years, mostly being dominant with the Brewers and being pretty meh with the Rangers.

Obviously the injuries in 2019 are the big question for Jeffress, otherwise he would’ve secured a much better deal. I suppose the hope is that he was heavily, heavily used in 2018, and then just wore down a bit in 2019 – and has now had more than an offseason to recover.

On a cheap, one-year deal like this, Jeffress makes a ton of sense for the Cubs’ bullpen. The relief market this year was terrible in free agency, so you really weren’t going to find too many sure things on big league deals anyway. So, then, you add a guy like Jeffress to the mix of “could be” guys, and you might have a solid late-inning reliever on a cost-effective deal.

The Cubs would have 41 guys on the 40-man roster if and when both Jeffress and Souza are official, so you can expect more maneuvering soon.

Note: Wittenmyer is saying that, like an arbitration-level contract, Jeffress’s deal is not fully-guaranteed (meaning, in theory, he could be cut during Spring Training for termination pay (30 or 45 days worth, depending on timing of cut)). Still a “legit” big league deal, but notable.