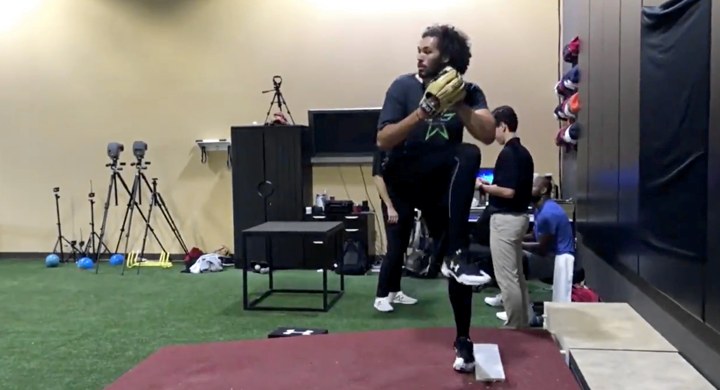 The first three groups up there get most of the focus, particularly because we don’t always get a ton of info about those developmental signings unless they were a big name at Driveline or something. But the work is being done behind the scenes, as guys – largely pitchers this time of year – from Indy Ball or Mexico or who weren’t signed out of college are showing off for teams to try to get snagged into a farm system.

To that end, two guys to share today that the Cubs have signed, each of whom comes with a big arm and an absolutely 80-grade name.

A lifetime dream come true! Proud to say I have agreed to terms on a contract with the @Cubs! I’m thrilled to represent this organization! A lot of thank you’s are in order – First goes to my parents, who have loved me and supported me through every step of this process! #FlyTheW pic.twitter.com/H2iamTGin2

Cubs scouting the Internet, sign a big boy with a big fastball.

Likely headed for Extended Spring Training, and hopefully to an eventual assignment to the AZL or Eugene. https://t.co/xffmcKAZcM

Bain was undrafted out of college, pitched well in the Northwoods League, and has been trying to catch on somewhere. He’s a really big guy (6’6″ 250 lbs), and tops out near 98 mph. Get him in the organization, and see what happens.

Then there’s Adam Choplick, who has much more pro experience, and spent his 2019 season dominating in the Atlantic League, and then has spent his winter being unhittable in Mexico:

Another lefty pitcher the Cubs are giving a shot from Indy ball, joining recent examples like Chris Nunn and Ryan Lawlor. https://t.co/ipT6EOvnqN

Choplick, 27, appears to have great stuff but works on command – I say that purely from scouting a stat line that features a ton of strikeouts, no hits, and a ton of walks. He must be a very uncomfortable at bat. Before his year in the Atlantic League and in Mexico, he was a Texas Rangers prospect, which sounds about right.

These signings follow a lot of what the Cubs have been doing in the bullpen at the big league level: find guys who have at least one special thing about them (velocity or spin or one great pitch or unique size or arm angle), get them into the organization, and see what you might be able to do to polish them into a more complete pitcher.

Bain figures to be a lower-level, longer-developing arm if he can stick, whereas Choplick, having had some years of development already, might be challenged in the middle levels of the farm system this year to see if he could be a big league contributor at some point in the near future.