Kaplan: "Multiple NL Teams" Have Made Trade Offers to the Cubs for Kris Bryant Skip to content 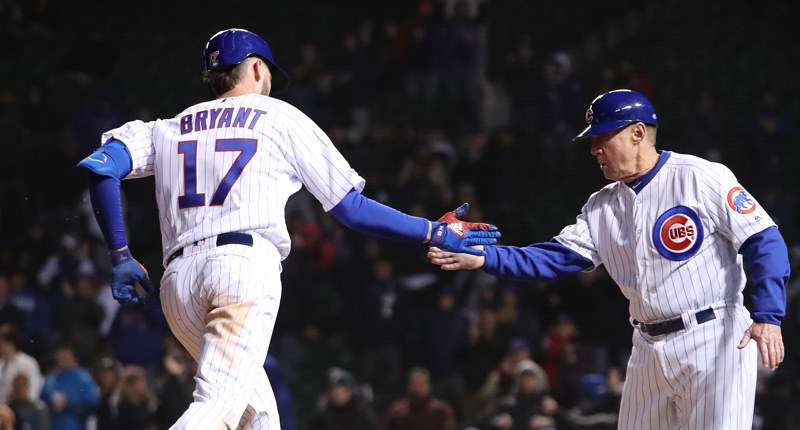 Although you could make a very sound argument that the Mookie Betts/Red Sox situation is apples to the Kris Bryant/Cubs’ oranges, we were long thinking that when the Betts trade went down, it would serve as a checkpoint for teams that were talking to the Cubs about Bryant. That doesn’t mean Bryant now *has* to be traded – the deals are extremely not connected in that way, and one does not logically flow from the other – but some post-trade phone calls or texts? Sure. That would make sense.

And that’s what has happened, according to Dave Kaplan:

With Betts now traded I have confirmed multiple NL teams have contacted Cubs re: Bryant offering packages of prospects/young players. Unsure if a deal gets done before Opening Day. If one doesn't Cubs probably hang on to him until July trade deadline. Tune in NOW on @ESPN1000

If one of those NL teams is the Padres – the Betts loser – then, in that case, there is a direct connection here on the timing. Dennis Lin reports that, yes, the Padres have talked to the Cubs about Bryant, but he writes that, “To date, the asking prices on [Bryant, Francisco Lindor, and Mike Clevinger have] been prohibitive, and not just for San Diego.”

Outside of San Diego, I’d surmise that there were probably some peripheral conversations going on with the Braves, Phillies, and Nationals (for example), and now maybe some of them checked back in with the Cubs about the names that had been discussed. But we know that all three of those clubs are pushing up against the luxury tax, themselves, and may not want to go over it to acquire Bryant no matter what. Moreover, the price tag on Bryant has been exceedingly high this offseason, even setting aside the financial component, neither the Cubs nor interested teams appear to have changed their position from whatever earlier talks took place. I expect these teams just wanted to see, one last time, if the Cubs have lowered their price.

In fairness to Kaplan, I guess I should point out that he’s very specifically saying these teams are making offers. So maybe it’s slightly more than hail mary chit-chat? I guess I’ve just grown really circumspect that the Cubs are going to move Bryant at this point, and maybe that’s coloring (right or wrong) how I read something like this from Kaplan.

Throw in the fact that now the Dodgers, who were among the better fits in a Bryant trade, are now out of the market, and it seems like a trade is at least incrementally less likely for that fact, alone.

Ultimately, like I wrote this morning, I would be shocked if the right trade is presented to the Cubs at this point in the offseason. Justifying a Bryant trade always would have required the kind of enormous return that teams are much less interested in parting with after they’ve constructed their roster and filled up their budget. Moreover, the Cubs unquestionably desired to be able to supplement their roster in free agency after a Bryant trade (if they were going to make such a trade at all), and the free agent market is dried up except for marginal contributors and rolls of the dice.

So, even as teams are calling and making offers, I do not anticipate a trade actually happening at this time. Like I said earlier, we’ll track this stuff as the credible rumors justify, but this simply does not have the same feel of inevitability like the Red Sox/Betts situation did.

Instead, I think it’s far more likely, if a trade happens at all before Spring Training, it’ll be the Cubs finding a way to unload some other salary in order to get under the luxury tax this year while keeping Bryant (at least until the Trade Deadline to see where things stand, but without the pressure of *having* to make a trade at that time to get under the tax).