Cubs Reportedly Have a New Sponsor in Arizona: the Nike Performance Center Skip to content 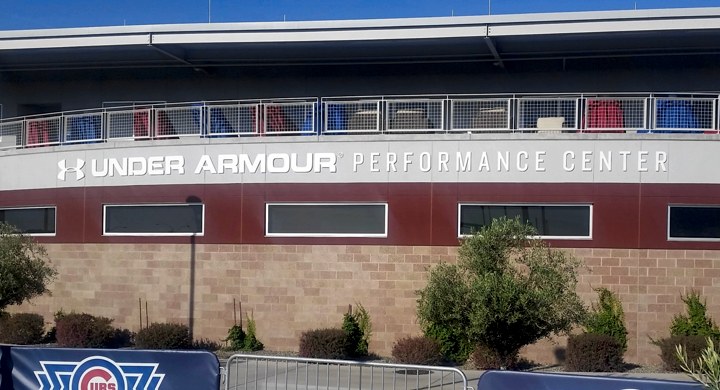 Now that MLB is aligning itself with Nike to be its uniform provider/sponsor, it only makes sense that the Cubs have reportedly realigned their own sponsorship in Mesa, Arizona, renaming their facilities there the Nike Performance Center, per Mark Gonzales.

Previously sponsored by Under Armour, the Performance Center is where the team’s training happens in Spring Training, but is also an important facility for training work throughout the year at all levels of the system.

I’d imagine we’ll get a look at the updated signing (and maybe facilities, too) next week as players officially report to Spring Training.

The original naming rights deal kicked off in 2014, and must have recently expired. At that time, Under Armour became a “Legacy Partner” with the Cubs – a tier of sponsor that not only meant a higher financial commitment, but also advertising signage at Wrigley Field, among other things. I wonder if we’ll see Nike sponsorship materials at Wrigley Field, too, this year?

In any case, no financial terms are yet known on this deal, or whether it’s even an increase in revenue for the Cubs. Though, again, given MLB’s alignment with Nike and the generally progressive nature of sponsorship price tags, I’m thinking the Cubs may have gotten a modest revenue bump out of the deal. And so long as organizational revenues, after organizational expenses, are going right into baseball operations, then I say go get that money, Cubs. Just do it, and such.