I'd Still Advise Against Expectations, But Brandon Morrow is Already Throwing Bullpens Skip to content 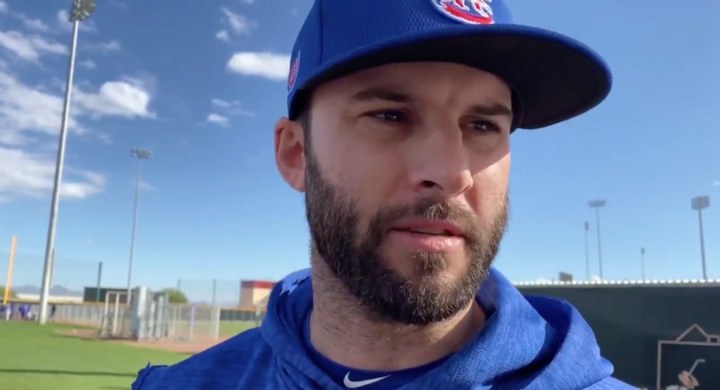 I find myself doing this thing whenever I talk about the Cubs’ bullpen plans for 2020: I forget that Brandon Morrow exists.

I’m not doing it intentionally, but, let’s be honest: it’s the right approach.

You know the story: Brandon Morrow is a tremendously talented pitcher who has dominated in recent years when he is able to be on the mound, but a litany of injuries throughout his career have severely limited the times he’s been able to be on the mound. For the Cubs, it meant just a half of a dominant year in 2018, and then a year and a half of surgeries and rehab before his two-year contract expired at the end of last year. But, partly to make-good, and partly because he wants to keep things going, Morrow thereafter signed a modest minor league deal with the Cubs to see if he might be able to come back and contribute in 2020.

You cannot expect Morrow to be healthy at any point in 2020, let alone to be on the mound contributing regularly for most of the year. But I guess the fact that he’s come back again and again throughout his career gives you some measure of hope, even as Morrow is now 35.

But anyway, back to what I said at the top: all the times we talk about the many upside arms the Cubs have accumulated for the bullpen this year – guys that are just sort of “let’s see what happens” – I forget to mention Morrow. It really isn’t an intentional slight, it’s just that’s how deeply I’ve internalized the reality that he’s so highly unlikely to contribute.

Take nothing that follows as an indication that I’ve changed my thinking. It’s just that, because a comeback is possible, and because the upside is so tremendous, we have to track Morrow’s physical progress this Spring. And right now, he’s healthy and throwing bullpen sessions (which is the furthest along he’s been in a very long time):

“So far so good,” says Morrow, who throws his 5th bullpen Thursday. Still has “aches and pains” in elbow area but feels “strong” when throwing and lifting, which is different than last year and hopes the aches are just part of rehab process. Focused on being ready out of spring.

Reliever Brandon Morrow attempting a comeback after missing the last 1.5 years. He says he’s healthy: “My stuff was still good last year when I was throwing live BP…I just couldn’t pick up my cup of coffee the next t day.”

Here’s Brandon Morrow on re-signing with Cubs. Has thrown four bullpens so far, but has more built-in off-days as part of a conservative schedule. He’s not declaring he’s “back,” but hoping to contend for Opening Day job. pic.twitter.com/GcKbgAyoAK

To be sure, even as it’s encouraging that Morrow is already able to throw bullpen sessions, you have to keep in mind, it’s a VERY conservative schedule:

Realistically, even if everything goes perfectly, Morrow is not going to be in the Cubs’ Opening Day bullpen. For one thing, without minor league options, the Cubs aren’t going to put him on the 40-man roster until they’re confidence he can stick and contribute. For another thing, the Cubs would want to make sure he can actually pitch at least two out of three days if necessary (to say nothing of being able to go back-to-back days; it’s pretty hard to carry a reliever who can never go back-to-back days, no matter how good he is on the days he can go). For still another thing, it’s possible Morrow might have only so many bullets this year in total, so the Cubs might not want to use ’em all up in the first half *IF* they feel like Morrow is going to be a legit contributor.

So anyway, for now, your takeaway here is that Morrow is throwing off the mound on a very conservative schedule. That’s better than things were last year, but it’s still an extremely long way away from actually contributing in the big leagues. I’ve got all the hope in the world for him, but I’m going to continue mentally crafting the possible Opening Day and early-season bullpen as though Morrow never made it back from the myriad 2018 injuries.