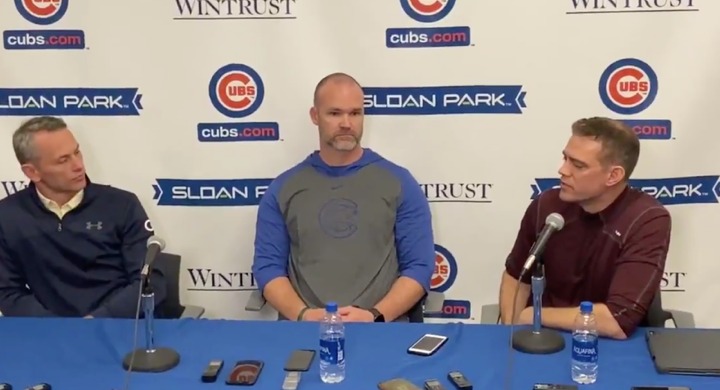 Today, Cubs pitchers and catchers reported to Spring Training in Mesa, Arizona and although that’s undoubtedly the highlight of the week, the opening press conference is a usually very important. Theo Epstein, Jed Hoyer and David Ross are at the mic, and I’ll update live as things roll in.

(NOTE: These are not *direct* quotes, but I’m doing my best on the fly to transcribe what was said).

Theo says almost certainly will make small (minor league) additions during camp. “Still some (bigger) chatter going on across the industry… We’re turning the page honestly with our focus … Time to pull together and focus on winning games.”

Theo admits Cubs were hoping to make more off season changes but is hoping a “new environment” will make the difference with his roster.

Theo says there are “no hard feelings” between front office and Kris Bryant. pic.twitter.com/Xh6RtvGrHf

David Ross sees Anthony Rizzo as a potential leadoff option this year, and, unsurprisingly, Craig Kimbrel as the closer.

Ross: "I'm trying to create an environment where these guys work together more."

Ross also reiterated he will up the intensity in live batting practice in spring, bringing in umpires and removing the batting cage from the field for those.

Ross: “it’s important for me to come in with fresh eyes (in evaluating Almora Jr., Happ, etc.)”

David Ross on the Kris Bryant trade rumors that permeated the offseason: "I'm looking at win totals and championships. And Kris Bryant helps us win games."