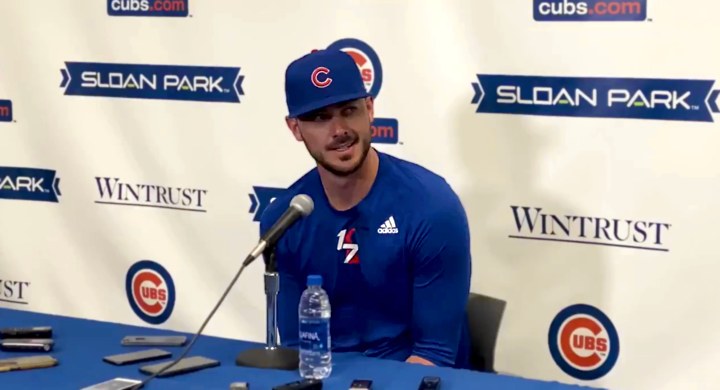 Chicago Cubs third baseman Kris Bryant arrived at Spring Training this morning, and immediately addressed the media in one of the most impressive player press conferences I can recall hearing in recent memory. Bryant was open, honest, clear, candid, relatable, and informative. Forward-looking, but acknowledging the unknown. Bryant was clearly just speaking his mind, and in a tough spot, to boot.

I’ll try to get the full presser audio in here as soon as it’s available.

I logged what I could while I listened, so I’m just gonna pop it in right here, together with some of the video that was snagged on-site. The “news-iest” part is this, though:

Bryant: It's fun to talk about the possibility of an extension. I love the city. I love the team. I love the fans. But I don't hold those cards. I just go play baseball and do what I do.

Clearly, Bryant is frustrated that this narrative that he'll never extend/re-sign with the Cubs has taken hold, and has become the backbone for a lot of the trade rumors.

So … an extension is still plausible with Bryant? Yes! That’s good!

It’s hard to square that with the weight of rumors for years now, but Bryant was very clear. I think it’s reasonable to presume that, of course, he is still open to an extension with the Cubs, but we also have to keep in mind that top-tier third basemen in recent years have signed seven and eight-year contracts in the $250 million range. Bryant may understandably price himself in that range, and that’s where the conversation on the two sides gets a lot more challenging.

The rest from the impressive presser:

Does Kris Bryant this he'll be a Cub for life? @cbschicago pic.twitter.com/Z1Y9VZzaho

Bryant says that it's really hard to tune out the trade rumors, but he tried to ignore it. Baseball is always on, though, so he sees it.

One big assist, though, was dumping Twitter. "Twitter is the worst thing that ever happened to the world," Bryant says to some chuckles.

Bryant, asked if he was surprised to still be with the Cubs… pic.twitter.com/aroyv1Qc4R

Remains to be seen whether the front office will tell Bryant "Hey, we're not trading you before Opening Day" or something like that. Sounds like Bryant would appreciate a heads up, though I think everyone knows the challenge there (what if some desperate team calls next week?).

Early on, Bryant was told the grievance decision might take a couple weeks. So clearly, everyone involved thought it was going to come down MUCH more quickly than it actually did.

Bryant: There are definitely no hard feelings on either side about the grievance process. He was just trying to do the right thing for the players, and see the process through to the end. He respects the org for all that they've done for him and his family.

KB calling out the haters and liars… and social media pic.twitter.com/xf7hgRu9dq

Bryant knows he had the best possible case from the players' perspective, and he just wanted to be the guy to take on the issue. He has no beef with the Cubs about it. Just something that had to be done. (He's right. Hope for changes in the upcoming CBA.)

Bryant says there are no hard feelings whatsoever after the grievance process… pic.twitter.com/SR7FqUuafX

Bryant says he was fine, health-wise last year. Two years ago (shoulder), not so much. Says the knee and ankle (from last year) are now fine. I feel good.

“What a disgrace.” Bryant on Astros scandal.

Said he doesn’t feel like apologies he’s read/heard are genuine. Believes it was going on in ‘18-19 too. And says buzzers theory “not farfetched” to believe given all that’s come out. Felt players “absolutely” should’ve been punished.

Bryant believes the Astros used buzzers as well. Says the players should be punished. https://t.co/VPpJSO3wSx

Having a baby on the way has helped Kris Bryant put everything else in perspective… pic.twitter.com/bwmXfgN0AQ