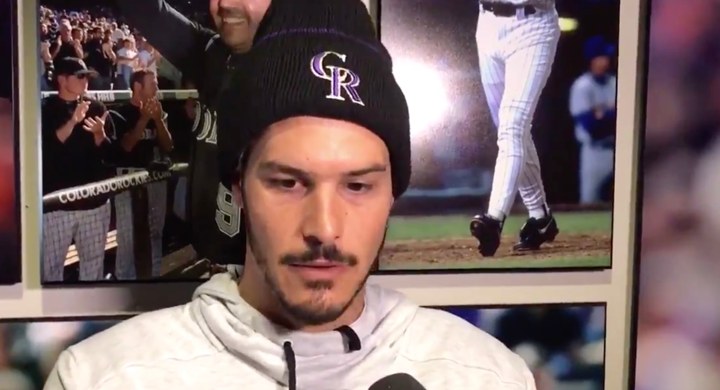 There’s not a lot to say about the fact that Nolan Arenado has reported to Spring Training with the Rockies. I think everyone knew that was a potential line at which a trade was much easier to pull off, and it didn’t happen (be it with the Cubs or any other team). So now it is vastly more likely that Arenado sticks with the Rockies on through to Opening Day.

For the Cubs, I suspected they were simply sitting back and allowing the Rockies an opportunity to show any desperation before the reporting date, and clearly that didn’t happen. So Arenado will open camp with his long-time team, unhappy as he might be, and try to put on a good show.

Arenado tells the AP that he never went so far as to request a trade from the Rockies, but he also knows what was going on this offseason, and acknowledged there were a few times he wasn’t sure he was going to be with the Rockies this spring.

But he is. And barring a surprising and rare mid-spring trade, Arenado will open the season with the Rockies … with Trade Deadline rumors picking up by May or June.

Whether those rumors will involve the Cubs depends greatly on how competitive they are at that point, as trading for Arenado is going to make a lot less sense if the Cubs are looking like they, too, will not be competitive. But if they do look competitive, I suppose that might be the one and only rare circumstance where they might consider scrapping their 2020 luxury tax plan. If there’s a bargain trade to be had for Arenado (because, let’s imagine, he says he’ll approve a trade only to the Cubs or something like that), the Cubs could decide to be well over the luxury tax this year if it meant winning in 2020 and getting Arenado on a cheap long-term deal (because the Rockies are eating a ton of contract). And that would potentially mean *keeping* Kris Bryant in the process. Extraordinarily unlikely series of events, but crazier things have happened.

In the end, this is spoken like a guy who wishes he was on the Cubs: