Bryant and Rizzo Will Bat 1-2 for the Cubs - Is It As Simple As Alternating Handedness After That? Skip to content 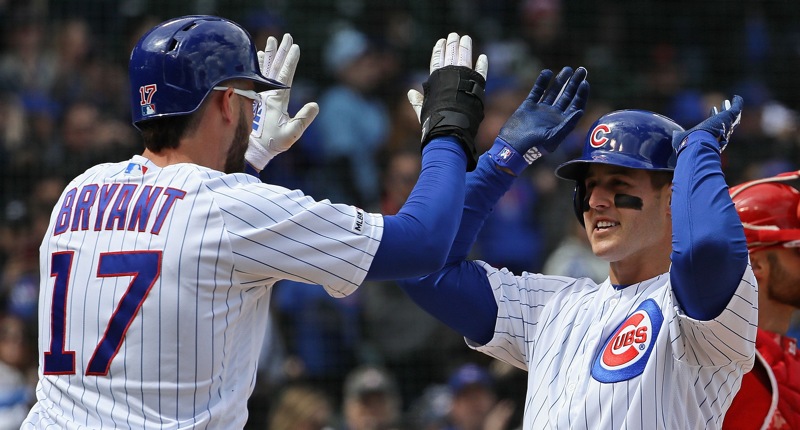 Ah … an offseason practice as old as baseball, itself: dreaming up different ways to arrange your favorite lineup. And it’s not just people like us prognosticating on Twitter or in various corners of the web. Cubs Manager David Ross clearly has it on the brain, too: “Listen, I’ve thought about this to death, and I’m still thinking about it.”

Fortunately, the guy with the keys has made a little bit of progress.

Yesterday, we learned that Kris Bryant offered to lead off in 2020, effectively taking the toughest lineup decision off Ross’ hands before their spring games even start. The general reaction around baseball and online has been mostly positive, and I can certainly understand why: They don’t call it GYBBTMPAS for nothing (get your best batters the most plate appearances, stupid). I may have just made that one up, but it’s true!

And today, Anthony Rizzo confirmed, as expected, that he’ll bat number two behind Bryant. Quite a 1-2 punch for the opposing pitcher to face right out of the gate.

It’s also, a righty-lefty start to the lineup.

With new rules this season – specifically the three-batter minimum for pitchers – there’s also a renewed affinity for keeping lineups as lefty/righty balanced as possible. For the Cubs, although he hasn’t committed to it, that likely means Ross will have a fairly easy set of moves after Rizzo, too.

I think it’s pretty fair to assume that the batting order on any regular day will go Bryant-Rizzo-Schwarber-Baez-Contreras followed by some combination of Jason Heyward (or Steven Souza) in right field, David Bote (or Jason Kipnis/Daniel Descalso) at second base, and Ian Happ (or Albert Almora Jr.) in center field, depending on the matchup.

Small-aside: I’m operating under the assumption that Nico Hoerner will start the year out in Triple-A, to get some experience there while he works on being more selectively aggressive in an attempt to generate a little more in-game power.

With this knowledge in hand, Brett and I have slightly different lineup preferences, but more or less hit on all the same beats: 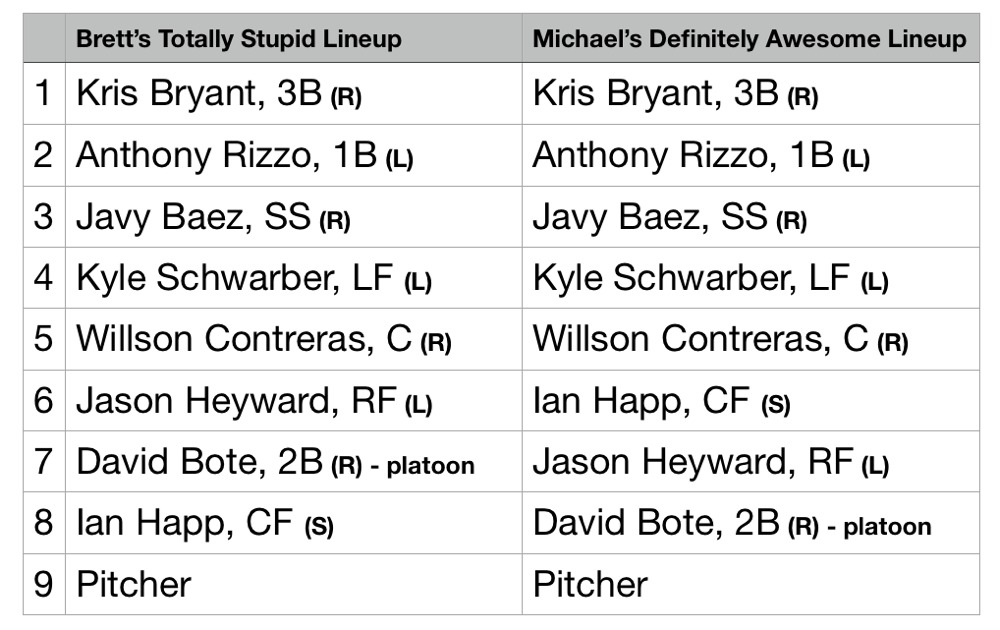 Best hitters up top, maximizing lefty/righty balance, leading off with Bryant and Rizzo, followed immediately by Javy Baez, etc. It all looks good. And no matter which way Ross goes after hitter #5, he’s going to be fine. The math suggests it doesn’t make that much of a difference anyway, and he has a mix of hitters (Heyward, Happ, Bote, Souza, and to a lesser extent, Almora and Kipnis/Descalso) with plenty of obvious offensive upside in the *right* matchups.

But all of this lineup talk did spark a thought in my head – er… a question, really – albeit an unfinished one: Are we absolutely positive that going lefty/righty all the way down is the right way to attack the new three-batter minimum rule?

Obviously, the theory is quite clear: if a reliever must face three batters, alternating lefties and righties makes it tougher for an opposing manager to go to a “LOOGY” in certain situations, lest that pitcher be forced to face at least one righty along the way.

But here’s my issue … if an inning or a relief outing at any point starts with a lefty (let’s say Anthony Rizzo is up with no outs), this actually makes going to a lefty a much easier decision, doesn’t it? Sure, he’ll have to face Javy Baez in between, but he’ll get Rizzo and Schwarber during his three batter-minimum for sure. That’s guaranteeing him two lefties in his appearance, with only one tougher out in between. If you were more strategic – against only certain teams with certain pitchers available that fit the mold – you might actually want to put to righties behind a lefty to make the decisions even tougher.

You want a lefty to face Schwarber? Fine, but then he’s got Baez and Contreras up next with nowhere to hide.

Okay, now with that said, I have a few points to concede: (1) For any scenario I can drum up where it works better, there are others where it simply would not, (2) We still don’t have a great grasp on the impact this new rule has had on big league rosters and whether that’ll change throughout the year or even past 2020, and (3) Even under perfect circumstances, this is still going to depend on the opposing bullpen – not only who’s on the roster, but who’s available that night.

My broader point is only that we don’t have a perfect sense of how the three-batter minimum will manifest itself through manager decisions this season, and I don’t want to get stuck assuming we have the absolute best answer when there’s still a ton of variables to define. In any case, I’m excited to see what Ross draws up – together with the Cubs’ math nerds – and I hope we all keep an open mind on what might actually work best.