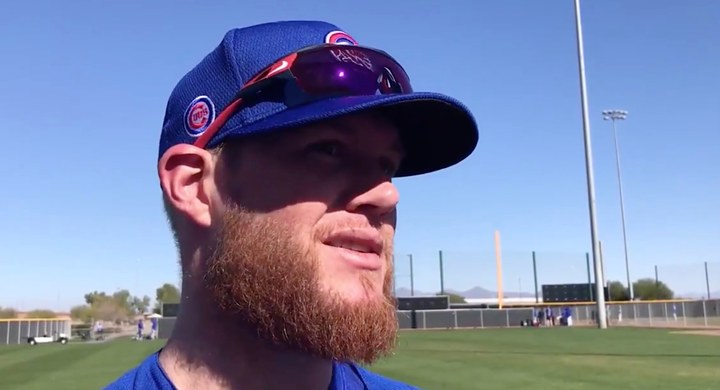 Saying Craig Kimbrel falls into the same category as Brandon Morrow in terms of having a modified ramp-up process is a sure-fire way to make Cubs fans poop their pants. via @MLBastian: https://t.co/tlsKjJmG8o pic.twitter.com/G7VSkzucYm

I think the intent is being missed here by some. He’s not “behind” per se. He just has his own program, with input from Hottovy/trainers. Veteran guy, track record, doesn’t need a starter’s build-up, etc;

Morrow’s a different situation, but also on very individualized program.

Cubs closer Craig Kimbrel says he’s scheduled to throw live BP in the next couple days. Knows fans feel he has something to prove this year. pic.twitter.com/NL9PvSqGOi

Javy Being Javy during live BP vs. Jon Lester… pic.twitter.com/qNIfgBJE7p

Back on the bump. pic.twitter.com/rBYeE9lHsP

A round of Nico Hoerner BP… pic.twitter.com/MnvrGUIdD1

Mike Olt and Kris Bryant crossed paths in the clubhouse this morning. It was a wrist injury to Olt, now a rep with Chandler bats, that led to Bryant's promotion to the Cubs.