I'm Just Gonna Say It: I Think Tyler Chatwood Is Set Up for a Very Good Season Skip to content So far, the Cubs have played three Spring Training games this season, each started by one of the three candidates vying for the final spot in the 2020 rotation: Alec Mills, Tyler Chatwood, and Adbert Alzolay.

Alzolay (1.0 IP, 3H, 2ER, 1BB, 3Ks) had the noisiest overall debut, while Chatwood (1.0 IP, H) and Mills (1.0 IP, BB) delivered fairly clean outings, but there’s a long way to go in what should be a legitimately winnable competition. An inning of Spring Training doesn’t really tell you much, but I really think any one of these guys could walk away with the job, if they earn it.

Still, it’s tough to ignore Tyler Chatwood’s front-runner status at the moment, especially because I think he’s earned it.

After signing a surprisingly lucrative deal with the Cubs before the 2018 season, Chatwood disappointed to the extreme during his first season in Chicago, posting the highest single-season walk-rate (19.6%) among all pitchers with at least 100.0 IP since 1987. It seemed like his mechanics got out of whack, which sapped his control, which sapped his confidence, which spiraled and just made things worse.

But 2019 was a very different animal.

Chatwood, 30, tweaked his mechanics over the offseason and migrated into a hybrid role that began mostly with mop-up innings, before eventually turning into a few high-leverage relief appearances, and several successful starts. His stuff looked better overall (that’s never really come into question, but he was throwing harder than ever) and his walk rate dropped to 11.4% by the end of the year.

It’s not just the season-over-season improvements that’ve caught my eye. It’s also the progress he made throughout the year last year. For example … 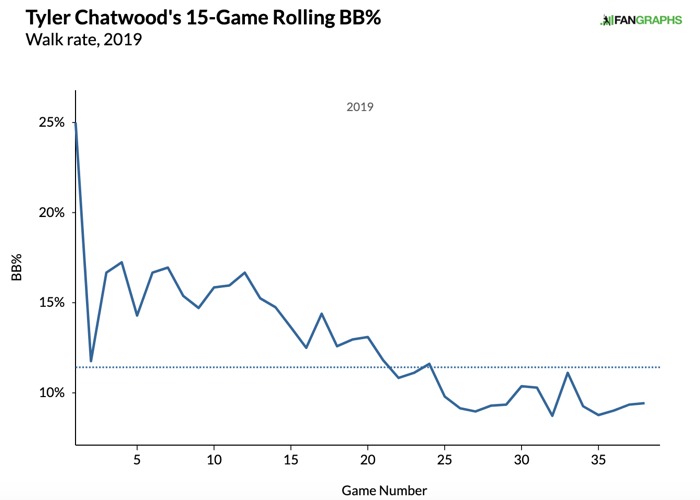 Yes, Chatwood’s final 11.4% walk rate is nice to look at, but it’s probably fair to say he had things under control far better than that. From May 22nd through the end of the season (52.1 IP, including four of his six starts), Chatwood’s walk rate was actually down to 9.0%, which is just barely north of league average for 2019 (8.5%). 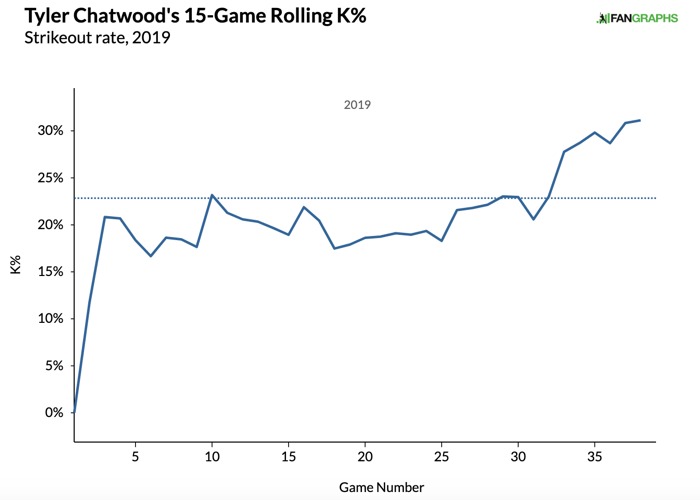 And his strikeout rate follows a similar pattern: The season long numbers (22.8%) looks just fine and reveal great improvement over 2018 (17.5%), but the graph shows that he actually finished MUCH stronger. Choose your favorite cherry-picked splits, they’re all good:

How did he manage to increase his strikeout rate so much while totally reducing his walk rates to league average levels? Well, for one, his whiff rate kept increasing throughout the year, which isn’t a surprise: Chatwood gets by on killer stuff missing bats, not crafty stuff fooling hitters: 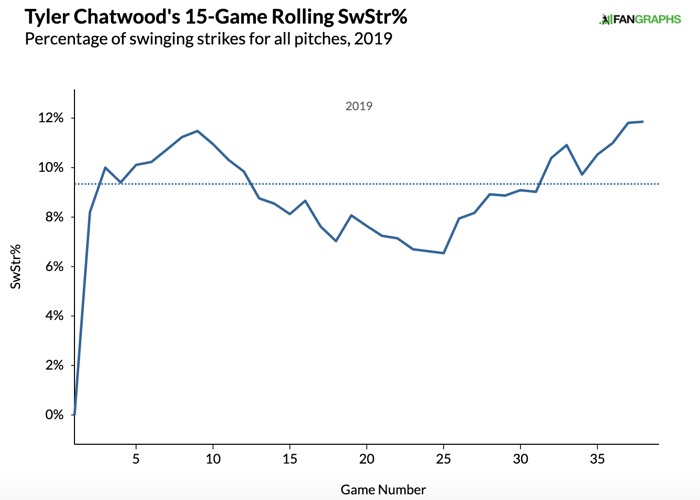 He did get an unusually high amount of swings out of the zone, which is always helpful (not only for strikeouts, but also weak contact): 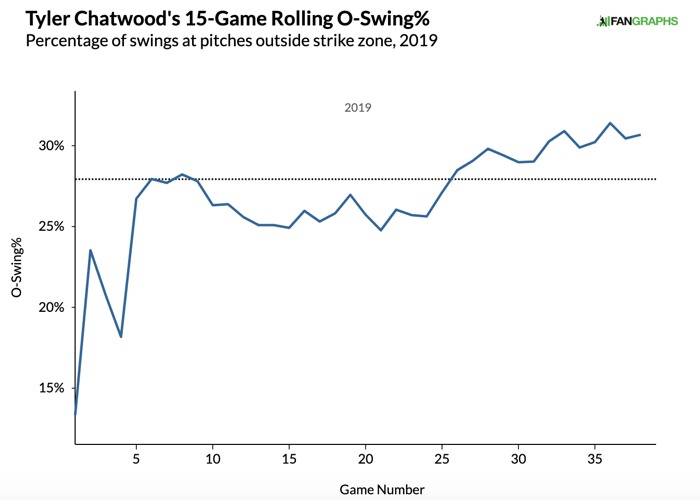 If I had to guess how he managed this, I’d point in part to the ever-increasing velocity of his sinker, and the fact that he began throwing it more than ever last season: 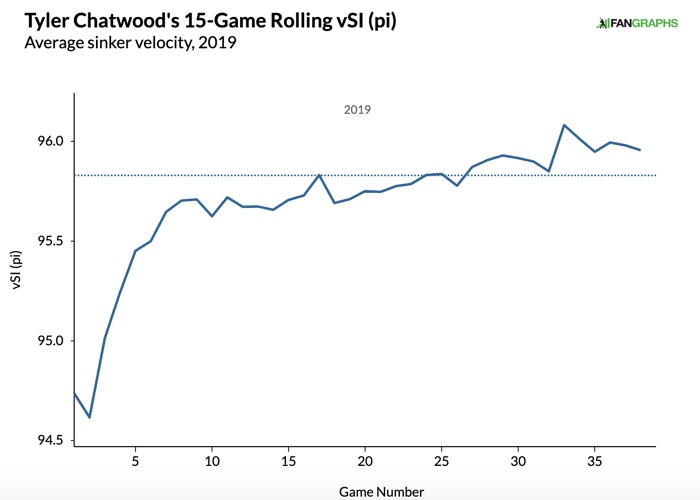 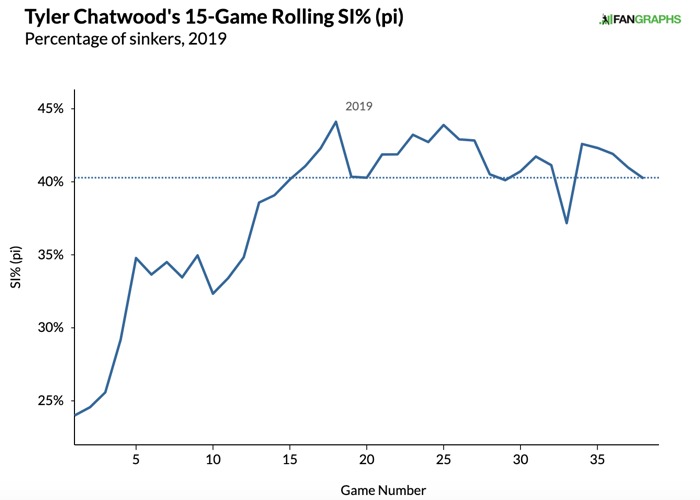 But Chatwood wasn’t succeeding only when he was missing bats last year. He also posted really impressive soft (20.2%) and hard (31.7%) contact rates – especially impressive for the 2019 season, in particular, when league averages were at 17.0% and 38.0%, respectively.

And even those improved dramatically as the year went on: 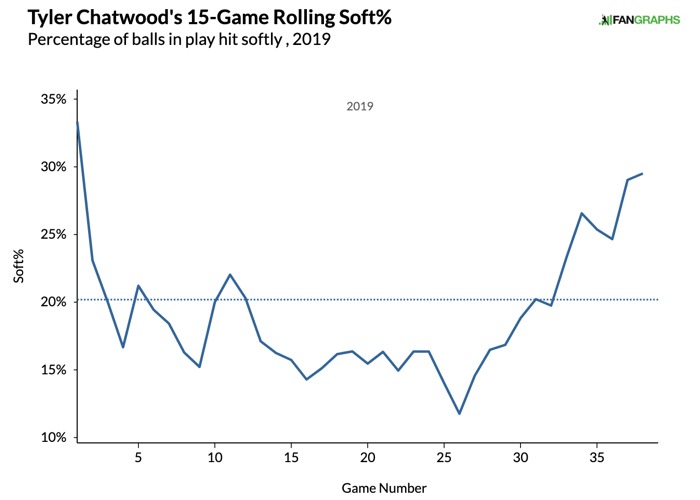 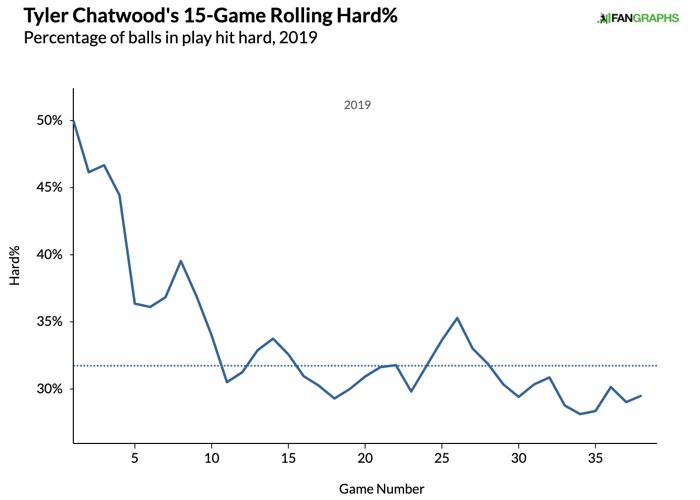 So to recap, Chatwood posted solid walk, whiff, o-swing, strikeout, soft and hard hit rates for the season as a whole, while watching each of them move into upper-tier levels by the end of the season. He didn’t just get better year-over-year, he got better throughout the season leading up to the present.

That gives me a ton of optimism, relatively speaking. And apparently it gives him a ton of confidence.

“I think there’s still a lot of untapped potential,” Chatwood said via Cubs.com. “Right now, I feel like this is the best I’ve ever been. I’m able to set up pitches. I’m able to see stuff. I have confidence that, if I miss, come back with a breaking ball. So, I feel really good. Like I’ve said, I’m very excited to get going. Last year was tough, but the way I pitched at the end of the year, I feel like it set me up for a good year this year and I’m excited to have that.”

Now, the concern here could be that that he was only able to throw his fastball harder (and more often) because he knew he wasn’t going to be throwing as many total innings last season, and so could go max effort in shorter bursts more often. And I won’t hide the ball, that’s crossed my mind.

But it’s important to remember that Chatwood is more than his fastballs. He also threw his changeup (7.5%) and his curveball (11.3%) far more than usual last season, and the latter recently came in for some extra praise from Sahadev Sharma at The Athletic: “Chatwood’s curveball spin rate is among the best in baseball over the last three seasons. The average spin rate on a curveball is around 2500 rotations per minute (RPM). Of the 29 pitchers who average a spin rate of at least 2750 on their curveball and have thrown at least 400 since 2017, Chatwood ranks 25th in usage of that pitch at 9.1 percent.”

(Check out his piece at The Athletic for some more graphs)

And he seems to not only understand how to use that pitch to better set-up the rest of his arsenal, but also seems genuinely excited about it: “Once I saw that and then you actually put it in a game and have success, it’s like, ‘Holy cow!’ Then it made my fastball play way harder, too …. I saw that definitely go up once I mixed in a slower curveball just to back them off and then was able to throttle it back and forth. You look at the games I used it and I had lot more success than the games I didn’t. So you see it first-hand and then learn how to apply it better each time.”

Given his age, premium stuff, the mechanical tweaks from 2018-2019, the in-season improvements last season, the confidence this year, and the trust he’s put in pitching coach Tommy Hottovy and the rest of the pitch lab rats, I am surprisingly comfortable being optimistic about Tyler Chatwood this season. In the rotation or not, I think he’s set up for a good final season under contract with the Chicago Cubs.