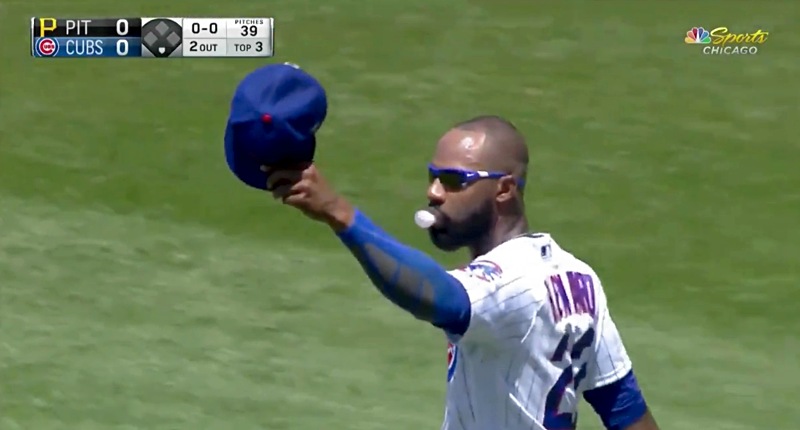 One of the trickiest discussion points this offseason was about how the Cubs could manage to add a big-time bat in a corner outfield spot (the reunion with Nick Castellanos being the obvious angle), despite the existence of two corner outfield bats on the roster in Kyle Schwarber and Jason Heyward.

With Schwarber, particularly after his explosive second half, you don’t want to sit him down too often, even against lefties, so you could mostly consider left field occupied for purposes of the Castellanos discussion. Then, in right field, although we’ll continue to argue that Heyward should probably sit down against more lefties this year, I was pretty opposed to making him the everyday center fielder to accommodate Castellanos in right. Doing it for a couple months at the end of last season? To see how his development in right field has gone and to see how Heyward fares in center when flanked by Schwarber and Castellanos? Sure. Fine. Love that Castellanos bat. But making that your regular plan? I had more mixed feelings about it.

So, then, when the Cubs never did open up the cash to sign Castellanos and he signed with the Reds, although I was absolutely not relieved – I wanted Nick back! – I was at least comforted that the outfield could make some sense on paper.

Specifically, I can see a situation where the Cubs have five outfielders for their three spots, with Schwarber starting most games in left field, Heyward starting every game in right field against a righty, and Ian Happ, Albert Almora Jr., and Steven Souza Jr. picking up the remaining starts in center field and in right field against lefties.

Or at least, that’s the approach I *want* to see the Cubs taking, and it seems like the first step is in place, with manager David Ross confirming Heyward is not going to be expected to play a lot of center field this year.

“I’m trying to keep him out of center,” Ross said of Heyward, per the Tribune. “He’s most comfortable out there (in right). He’s one of best right fielders in the game. He’s got the hardware to prove that when he’s right. He reads the ball extremely well out of right field. I’m not saying I’m not going to put him in center. But I’m trying to keep him out of there as much as possible. We’ve got a good little competition in center with two guys playing well (Ian Happ and Albert Almora Jr.).”

Heyward, 30, has pretty consistently shown the ability to play passably in center field the last few years, but he’s near the top of the league in right field. So if you’ve got the players in place where it already makes sense to mostly keep Heyward in right, then please do it.

Perhaps a more dedicated share of his time in right field in 2020 will not only be better for the Cubs in center field, but also might allow Heyward to get back to being even better in right field. (It’s also worth noting that as Albert Almora’s performance in center slid last year, that may have impacted Heyward in right. Hopefully that will be improved this year.)

Note that, by Outs Above Average at Statcast, Heyward still rates as a top 15 defensive outfielder overall – it’s just that he wasn’t in that super-elite tier (the difference between the guys at the top (near 20 outs above average) and the guys in the 15 range (under 10 OOA) is kind big). He can still be very, very good defensively for the Cubs in right field.

Throw in the fact that he hits extremely well when you (1) don’t lead him off and (2) don’t make him face all tough lefties, and you could have a very valuable Heyward in 2020. Indeed, the Cubs have given David Ross the pieces to put Heyward in position to have his best season with the Cubs.