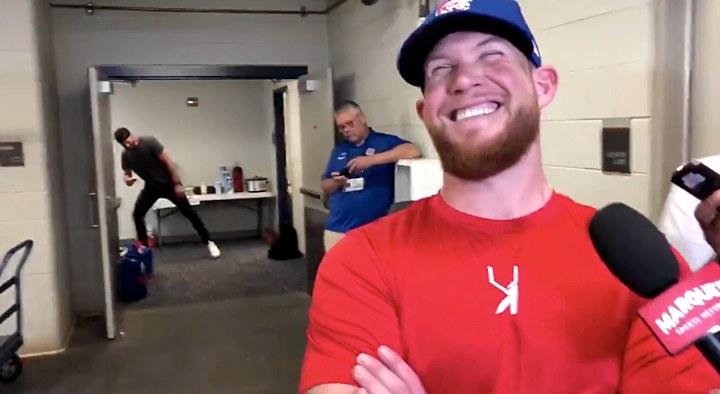 Craig Kimbrel just made his Spring Training debut – first of the season, but also first ever with the Cubs – and I was trying to focus on his discussion of how he was feeling, but Kris Bryant poked his head out and wrecked it.

And by wrecked it, I mean made everyone chuckle. Good get by Gordon Wittenmyer:

Bryant is turning into quite the ham this Spring, eh? I love it.

Oh, the important stuff: Kimbrel felt good and looked comfortable out there. RESULTS DON’T MATTER, but he did give up a homer.

Mostly, for our purposes, this is what matters:

If the gun was accurate, that's a decent first sign. Historically, Kimbrel is about 97mph by the time Spring Training *ends*, and builds up to 98-99 through the summer. So him being 95-96 in his first March appearance could be right on track. https://t.co/M3fYIXzisS

Kimbrel says he expects to add on from here, and was just kinda throwing nice and easy this time.

Kimbrel said sitting 95-96 at this point in the spring was a good sign and that he expects to ramp up more as the season approaches. Said the homer was just poor location, ball didn't have the action he wanted. Felt good for first spring outing.

So, fingers crossed that he follows his normal build, and we’re seeing at least SOME 97-98 by early April. That’s when you could reasonably project his normal 98-99 mph in the summer.