LOL: Kris Bryant Brags About His Key to the City, Humbles Ian Happ Skip to content 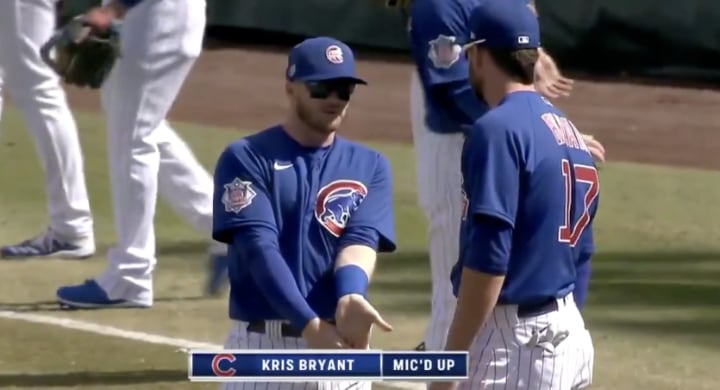 Ya know guys, if I’ve learned anything in life it’s that you just can’t impress everyone.

Take Ian Happ, for example. The guy was a first-round (and top-10 overall) pick in the 2015 MLB Draft and made it to the Major Leagues after just one full season in the minors. So far in the show, he’s launched 50(!) career home runs before his age-25 season, produced a lifetime slash line of .246/.340/.476 (112 wRC+), and was even the final National League player of the week for 2019. I’m also told he’s a scratch golfer, but I only kinda know what that means and it’s not baseball-related, so it’s probably not all that impressive.

Point being, that’s more accomplishments by the age of 25 than most people have in a lifetime, but for Kris Bryant? Eh. Is any of it really that cool? I mean, it’s not like it’s key-to-the-city-cool right?

.@KrisBryant_23 is from Las Vegas.

He made sure to let us know that as he was mic'd up! pic.twitter.com/BlEmqUQ2DP

This exchange just absolutely kills me.

Kris: Too many cities. You’ve gotta be born and raised there. And do something cool. What have you done cool?

Kris: Yeah … [but] Is that key to the city material?

First of all, I didn’t just think Ian Happ’s 2018 lead off home run was cool, I thought it was f**king freezing cold:

If Ian Happ leads off today's game with a home run, I will jump in Lake Michigan later today.

But I see what Kris is saying.

For however impressive Happ’s resume may read, this is Kris Bryant we’re talking about. He was the Collegiate Baseball Player of the Year (2013), the No. 2 overall draft pick (2014), the NL Rookie of the Year (2015), and the NL MVP (2016). Oh, and he also fielded the final out for the Chicago Cubs first World Series Championship in 108 years. So, uh, yeah, he’s done quite a bit to earn himself a key. So I guess … keep trying, Ian. In the meantime, I’m sure the Cubs will give you a key to the locker room or something.

NEVER STOP MIC’ing THEM UP.