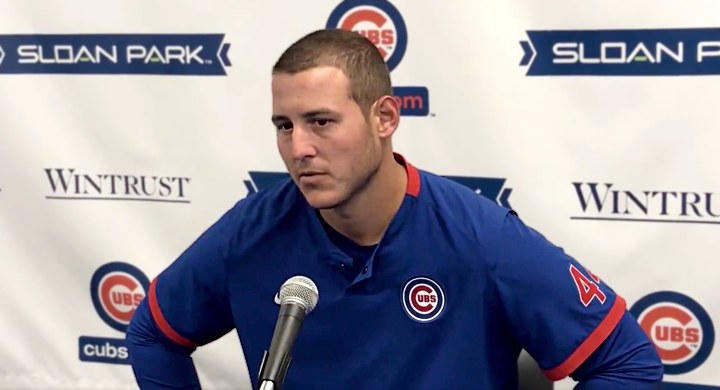 With Major League Baseball already taking steps to manage its exposure to possible Coronavirus risks, and with the top leagues in Japan and South Korea already delaying the starts of their seasons, the conversation about how to proceed in this nebulous space is going to continue.

How MLB will proceed if the disease continues to spread remains to be seen, but it’s entirely possible that we could see the start of the season delayed, or games moved to other locations, or – arguably the most dramatic alteration – games played in front of no crowd. Nobody really knows at this point just how dangerous it would actually be to have 40,000 people at a baseball game, but it’s not at all difficult to imagine an abundance of caution being advised soon by public health officials. It’s a weird and unnerving time.

Anthony Rizzo spoke today about the impact of coronavirus – doing so in a press conference-like setting, per the temporary rules put in place by MLB – and he’s trying to keep a level head about the situation. Safety first, yes, but you also can’t completely freak out and not live your life.

Rizzo gets into the situation, including the impact it is having on interactions with fans, and the understandable concerns among the players:

Rizzo said he will take precautions but “you can’t live scared” pic.twitter.com/kFIhzALD8Q

Rizzo said he would object to any thought of playing in an empty stadium, stating "we play for the fans."

Anthony Rizzo: “We would still be able to put on a show for people watching TV. But the experience fans bring for us in a game – especially at Wrigley Field – it’s an advantage. But (if) that’s what we have to do to play baseball, then that’s what we’re going to have to do.”

Anthony Rizzo said he would 'fight' playing in empty stadiums but understands the sensitivity of the situation.