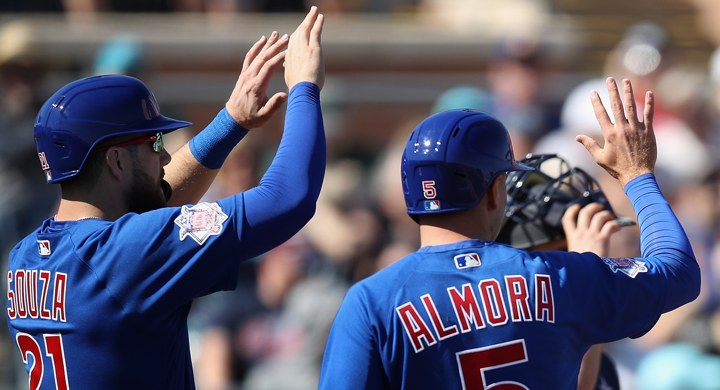 The Cubs’ nominal starting outfielders are Kyle Schwarber, Ian Happ, and Jason Heyward, from left to right, though we’ll obviously see periodic coordination with the versatile infielders, as well as the reserve outfielders.

As we do the inevitable thing as Spring Training heads to the back nine, I keep thinking about the composition of the 26-man roster, and wondering whether the prevailing assumption that the outfield is totally set is correct. Specifically, I wonder about Albert Almora, Jr. and Steven Souza, Jr. as sure-thing reserve outfielders.

I’ll pass on Almora first, because I think you all know the situation: for almost two full years, he’s been one of the worst hitters in baseball, despite having the inarguable upside of being a quality, high-contact bat with an excellent glove. Of course, last year, things just totally fell apart for him, including the field. He came to Spring Training after a rest, a refresh, and a rework of his swing – maybe that will be enough to set him back on the right course. It’s not like he isn’t still extremely talented, from a raw baseball perspective.

But it’s just important to keep in mind the possibility, given last year – and given the success the Cubs have had with this approach for guys like Ian Happ and Kyle Schwarber – that Almora, 25, could wind up heading to AAA Iowa to open the season and continue working on his swing and (more importantly?) his approach. Almora only barely got time at Iowa last year (13 games), and it was long after his disaster season was locked in.

Moreover, before he was initially called up in 2016, Almora saw only a half-season at AAA before being asked to be a part-time starter, part-time reserve in the big leagues on a playoff contender for the next few years. That’s not an easy transition for a developing player. I mean, he got only 323 *total* plate appearances in 2017! Of course he’s had a challenging developmental road!

All I’m saying is that it just isn’t completely crazy to suggest that Almora might wind up benefiting in the long-term from more time at AAA. He does have minor league options remaining.

As with Almora, there’s a presumption that Steven Souza, Jr. will be among the Cubs’ reserve outfielders when the season opens. And why wouldn’t that be the presumption? After all, he was one of the magical few players the Cubs signed to a guaranteed big league deal, and before injuries limited his last two seasons, he was breaking out as a potential star.

However, let’s not understate the severity of his 2019 knee injury, which was of the catastrophic variety, requiring surgery and months and months of rehab. Couple that with the injuries that limited him to less than half of a season in 2018, and you’re talking about a guy who has simply missed a ton of big-league-caliber plate appearances the last two years.

As a starting place for this discussion, though, we have to be happy that Souza is healthy. Even he is surprised at how well his surgically-repaired knee has responded this spring:

Souza on his progress from knee surgery pic.twitter.com/QagmME2VtN

Obviously that was always the primary consideration with Souza, and why he ultimately secured only a minimal big league contract this offseason. But it’s a good start. Souza added that all the data the Cubs have been logging about his swing and his weight transfer and all that good stuff indicates the knee is back to normal (Cubs.com).

Now I think the fair question is going to be whether the bat is ready to face big league pitching on an only intermittent basis (which is actually a tougher road to get yourself back to success than playing every day might be). Souza has made plenty of hard, line-drive contact this spring, but (1) the power isn’t back yet (.100 ISO), and (2) he’s logged 10 strikeouts in just 23 plate appearances.

“I think the timing of being off a year is a question, for sure,” manager David Ross told the Sun-Times on Souza. “He’s a guy that is going to have to continue to have those at-bats. The timing is going to get off from time to time, and how to rein that back in after a year off from at-bats, I don’t take that lightly. But everything he’s done has been great, and I expect him to develop and move forward.”

No, spring stats aren’t super meaningful, but as we’ve discussed, in certain situations, there are things you pay attention to. With Souza, it was always going to be the power and the strikeouts. Both are a little concerning right now in the early going, and you do wonder whether the possibility of a minor league rehab assignment to open the season has been discussed. It might be a necessary step in order for Souza to be at his best for a bigger chunk of the season.

If Souza did start on a rehab assignment to get his bat ready to go – he missed a year and a half of live action – or if Almora was to get regular playing time to open the season at AAA Iowa, that would clear up a spot on the roster and in the outfield reserve group for Spring Training darling Ian Miller.

Ian Miller’s red-hot spring has placed him on the #Cubs radar. https://t.co/mcjwrD6aSE pic.twitter.com/4ig8O2Rzqy

I want to be VERRRRRRY clear that this is not me advocating for Miller to make the team over Souza or Almora, even if just at the start of the season. I’m saying only that if the considerations on Souza and/or Almora were independently leaning toward a delay in them being on the big league roster, Miller is certainly going to be considered as a replacement.

Miller, 28, has drawn praise from Ross already this spring given his unique skill set as a speed guy off the bench, and one who we believe also plays excellent defense in the outfield. The catch with Miller is that, no matter how well he hits this spring, he probably wouldn’t actually hit even close to that level in the big leagues. He never broke out offensively in the minors, and even last year – his best – he posted a .269/.351/.449 slash line in his third go at AAA, which was still 6% below league average. You cannot realistically project much better than .251/.307/.344 (71 wRC+) slash line ZiPS projects for him at the big league level. Miller has climbed the ladder on the strength of his speed, defense, and contact skills, which is the most you could hope for off the big league bench.

There are other things that make him a less than obvious reserve outfielder for the Cubs, too. For one thing, as a lefty bat, he’s not a great complement to the trio of “starting” outfielders, who are two lefties and a switch-hitter who is still developing from the right side. For another thing, in the VERY SMALL sample available at Statcast, Miller rates as merely solidly-above-average in sprint speed, rather than elite.

So, then, given that we know he probably won’t hit, and given that he’s a lefty, Miller would need to be absolutely tip-top-elite on the bases to justify his presence on the roster, regardless of what happens with Souza and Almora. He has been an extremely successful base-stealer in the minors, and the eye test says he’s probably faster than the very small Statcast sample has. He’s also continued to be promoted in the minors and was grabbed by the Twins last year to be their “speed guy” for the stretch in their playoff run. On the balance, he’s probably quite fast, but I don’t know that we can be sure he’s Billy Hamilton out there.

In on a minor league deal, and with minor league options remaining, the Cubs have a whole lot of flexibility as to when, if ever, they want to have Miller on the big league roster.

Ultimately, a lot of this discussion is going to be informed by what happens on the infield, too. If Almora or Souza started the season off the big league roster, the Cubs might not necessarily elect to carry a fifth outfielder (like Miller) in any case, given that several of their infielders can play the corner outfield spots. And maybe they would instead just open the season with an extra infielder from the Jason Kipnis, Nico Hoerner, Daniel Descalso, Hernan Perez group. Or maybe it’s an opportunity to carry that third catcher in Josh Phegley.