Theo Epstein Speaks: Deep-Cleaning, Waiting for Directives, No Cubs Have Qualified to Test for COVID-19 Skip to content 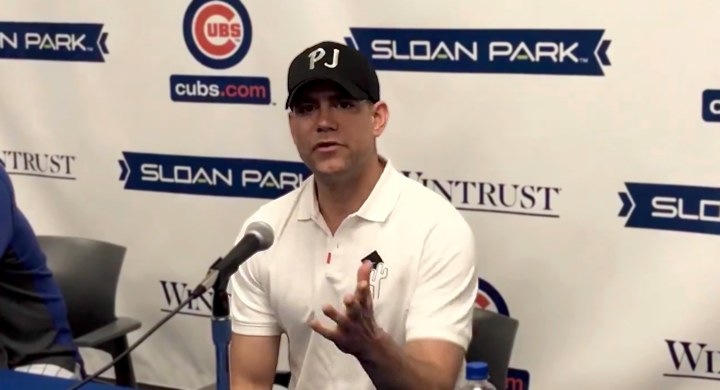 With MLB officially suspending Spring Training and postponing the start of the regular season for at least two weeks (plus Chicago teams agreeing not to host games with fans until at least May), there are enough open questions that it makes your head spin a bit when you start to go down the wormhole. We’ll try to take on the issues as best we can, and as the news about COVID-19 (and the attendant prevention measures) evolves.

As a preliminary matter, Cubs President of Baseball Operations Theo Epstein just spoke with the media about the situation, and how it relates to the Cubs.

Right now, there are still a lot of unknowns – including what’s going to happen for the players, in terms of scheduling, in the near-term:

Theo on short-term plans, waiting for directive from MLB pic.twitter.com/Vg4FFZaOeQ

Theo Epstein said the Nike Performance center where the Cubs reside will be shutdown on Friday for intense cleaning. Weekend and Monday schedule unsure . Monday was an original planned off day.

Epstein also spoke generally about situations like this, and about the challenge the United States is facing right (in part because of its own failure to properly prepare enough testing capabilities):

Cubs president Theo Epstein: “Testing is a much broader issue than just how it relates to a major-league team or a sports team. We’re far behind in this country as a whole in testing, so our stance is the more testing, the better.”

Theo: "I'm not a doctor, but following the lead of the doctors we haven't had anyone in camp, including David (Ross), who's met the standard to get tested in this country, which is right now it's a really, really high threshold just to get a test. …

"And we hope our country gets to the point where we can have a lot of testing so we can better assess the situation and make better decisions going forward. But … as it relates to the team right now, no player in camp has met the current standard this country to be tested.”

Theo Epstein: :"There have been a shockingly low number of tests throughout the country and we all hope that changes soon."

The league and the Players Association are going to have conversations tonight on how to proceed going forward, so we’ll likely get another update about whether players will remain at camp, or whether they will head home.

And depending on that decision, more questions will follow. This is all just so nuts.