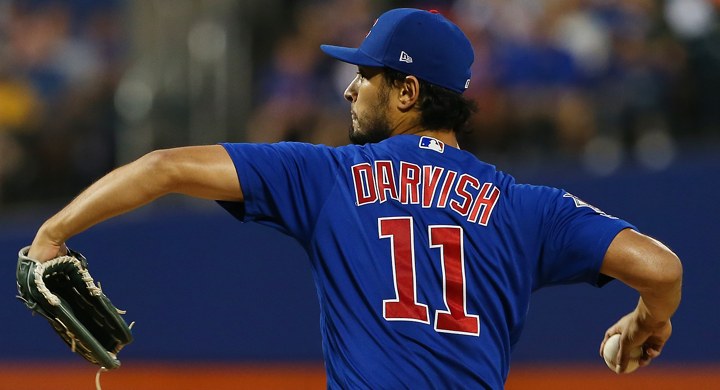 You can’t just write about baseball in a vacuum at this moment, knowing that the league is likely to suspend operations later this afternoon. It’s a weird, delicate time.

But I started putting a little something together on Yu Darvish’s start last night, because I noticed something in his second inning of work, and I figure I might as well give folks a very momentary opportunity to think about baseball.

What I noticed, as Darvish was losing his command a little bit after the first inning last night, is that he started to alter his delivery slightly between his fastballs and his offspeed stuff.

Note that this was not happening on every single pitch, but, after the first inning, I would say the majority of pitches followed this form. I grabbed for examples so you could see the clear disparity between his fastball and his offspeed pitches. Basically, it was in how far back he was taking his arm on delivery – here are four screenshots (two righties, two lefties) of how far the ball went back at the moment he started to bring his arm back around for the delivery: 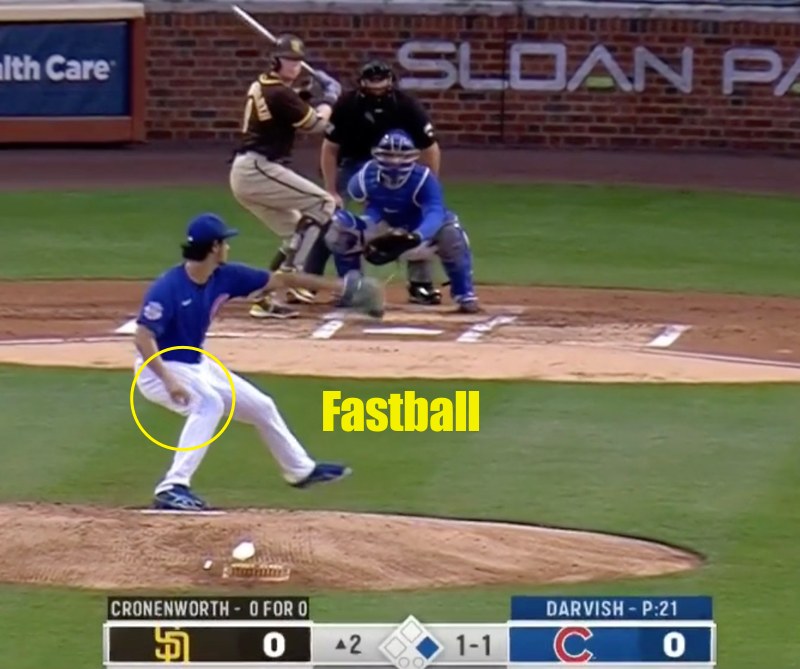 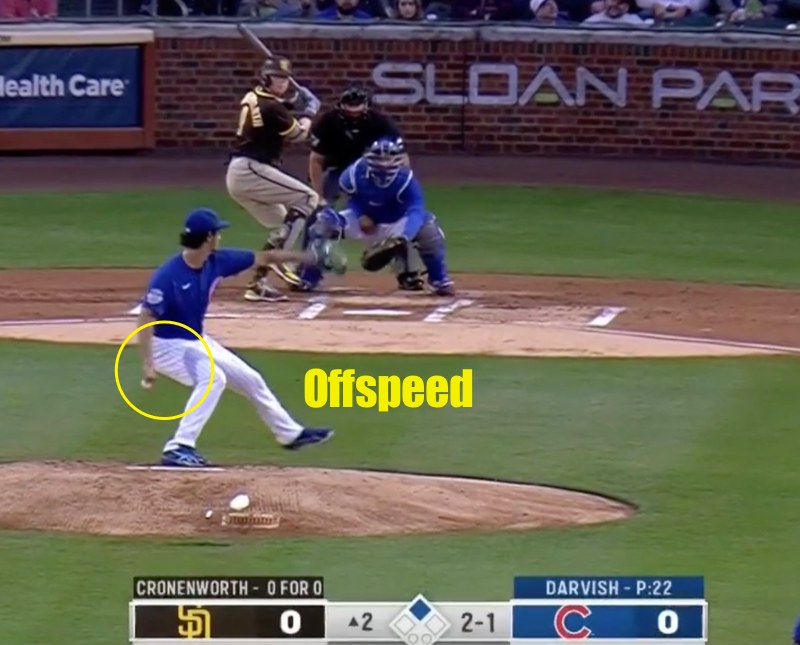 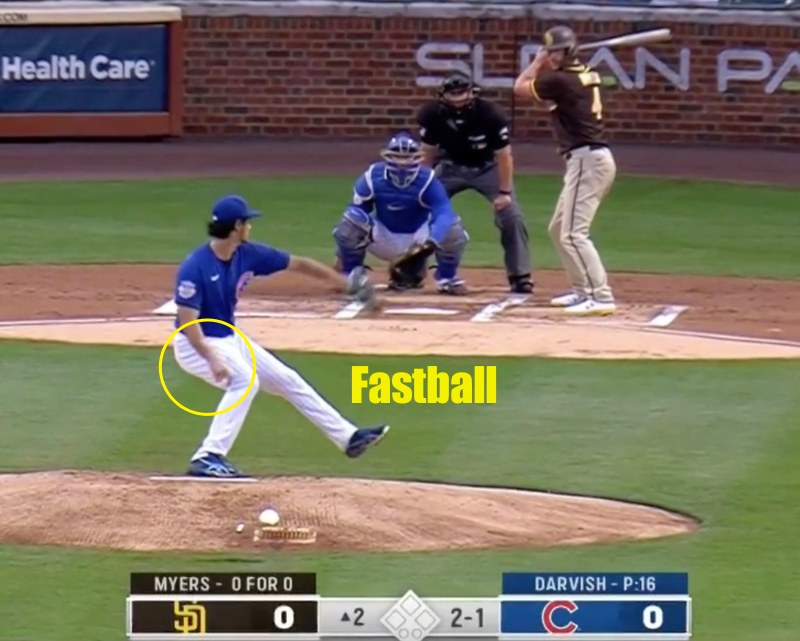 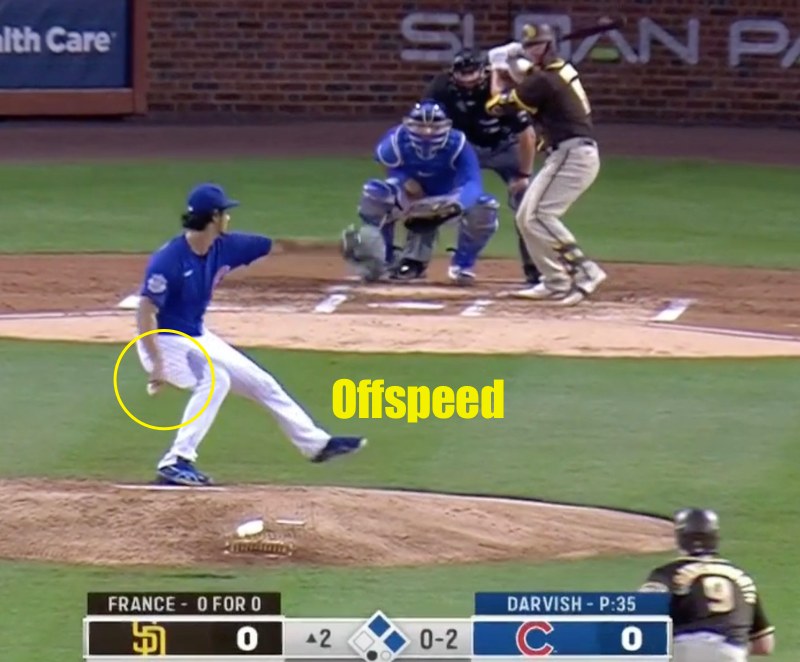 You can watch MLB’s highlight clip from last night to see some more examples. The offspeed pitches earlier in the clip show you the contrast with the later fastballs at the 49-second, and 60-second marks. The mechanics became consistent again for the final pitch in the clip, which was at the end of the third inning, for what it’s worth. There were certainly a few examples among his 70 pitches that did not fit the above images. Most did, however.

I know immediately where your mind goes, but I don’t want to quite go so far as to say Darvish was “tipping his pitches.” There are a variety of things we can’t quite know from a Spring Training affair. For example, was he working on something particular with his fastball, and in the process of getting his mechanics to square? Or did he simply lose his mechanics on his fastball for a little bit?  Maybe the ball is still hidden either way?

Because the whole “tipping pitches” thing has been publicly discussed so many times before with Darvish, and because the visual difference here was so strong, though, I thought it worth bringing to folks’ attention. In general, after the first inning, when the arm went long (the ball clearing his leg from the camera’s vantage point), it was an offspeed pitch. When the arm stayed short, it was a fastball. Just about every time.

I figure if I noticed, other teams reviewing tape are going to notice the same thing (if the Padres didn’t notice live). More importantly, I expect that the Cubs definitely noticed, and Darvish probably could even feel himself doing it.

Ultimately, we know nothing beyond the fact that, after the first inning, Darvish’s hand wound up in a very different spot on his offspeed pitches than on his fastball. It was interesting to me. And it was even more interesting after Darvish made this comment following the start:

After a strong first inning, Darvish walked three in a 28-pitch 2nd. He said he has felt off mechanically in recent days. Still felt off today. Already watched video of his 2nd inning tonight.

"I found one thing, so I can figure it out for next game."

No idea if that’s related to what I noticed in the mechanics, but I did remember Darvish telling Sahadev Sharma earlier this spring that he was trying to improve the spin efficiency on his fastball, which required changing his hand angle:

When asked what exactly he changed [his fastball grip], Darvish turned toward his locker, grabbed a ball and demonstrated the difference. If you imagine the gripping of the ball like the hands of a clock, with the fingers gripping the ball as one clock hand and the thumb the other, originally, Darvish’s fingers were at 1 o’clock and his thumb at 7 when the ball is released. To improve the spin efficiency, Darvish would need to cock his wrist in a counter-clockwise manner, ideally having his fingers at 12 and thumb at 6. The movement doesn’t need to be so dramatic, but that’s the general idea.

“My hand was at this angle,” Darvish said. “Most others are at another, so their spin efficiency is better. After I came here and started throwing bullpens, I made sure every pitch I checked on Rapsodo and little by little, I changed my angle. When pitchers don’t have a good spin efficiency, most people throw it like this so you have more gyro-spin. So the ball goes down. I’m trying to go more straight and that will help.”

It makes you wonder if the fastball grip change, designed to get more rise (more spin efficiency) out of his four-seamer, is showing up in the arm mechanics I screenshotted above.

So long as the batter can’t see it, then it’s not a problem, and all we’ve done here is discovered, on video, what Darvish is working on with his fastball. Here’s hoping. I still get giddy thinking about the upside this year, whenever baseball is played.