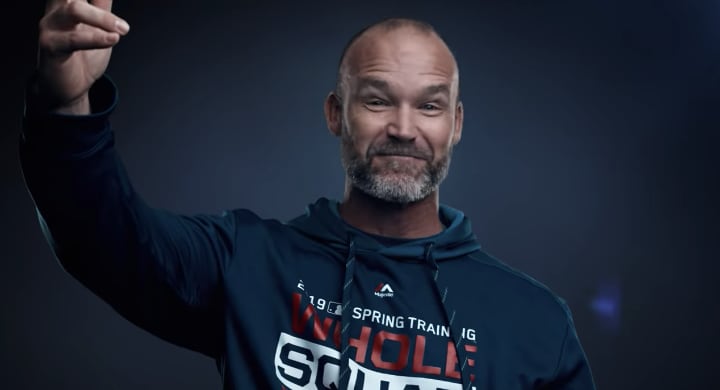 Before Game 7 of the 2016 World Series (remember that one?), I remember Joe Maddon basically promising not to call upon Jon Lester from the pen in the middle of a dirty inning … and I believed him.

Of course, the minute Kyle Hendricks got into just a teeny bit of trouble (somehow, one guy on first with two outs was considered trouble) out came Joe Maddon and in came Jon Lester. It didn’t go smoothly initially (Jason Kipnis and Carlos Santana scored after an infield single, a throwing error, and a wild pitch), but Lester was ultimately a very useful substitution in that game.

Of course, he wasn’t the only substitution.

When Lester came into the game to relieve Kyle Hendricks in the 5th, David Ross came in to catch for him. And I can admit – at the time – I was a little weary of the decision (to be fair, I’d never been more stressed in my life). Ross was Lester’s personal catcher and was having a fine offensive season (101 wRC+), but Willson Contreras was the stick. Everybody knew that. Was it worth subbing out his bat just to get Lester into an imperfect inning anyway? Turns out? Yes. It very much was.

Not only did Lester perform well the rest of the way, David Ross’ bat came through in an enormous, game-changing way.

So sit back and enjoy (new Cubs manager) David Ross break down coming into the game in the first place, as well as his famous – and ultimately critical – Game 7 home run off an elite Andrew Miller.

Goosbumps. A little bit of anxiety, too (I can still feel my heartbeat from that night), but mostly goosebumps.

But excitement and good vibes aside, doesn’t this also make you feel so much better about David Ross as the next Cubs manager? Before he was even technically a candidate (this video is almost a year old), he was already showing us how to be the guy the Cubs need him to be.

“I walk into the locker room that day and like everyone is playing Mario Kart … Game 7 of the World Series. I was like ‘Hey idiots, can we get off the Mario Kart and get locked in?‘”

Here’s another: “Everybody was coming up to me like ‘Dude, this is your last game, how do you feel?’ And I’m like I don’t care how I feel! Let’s focus on the game!”