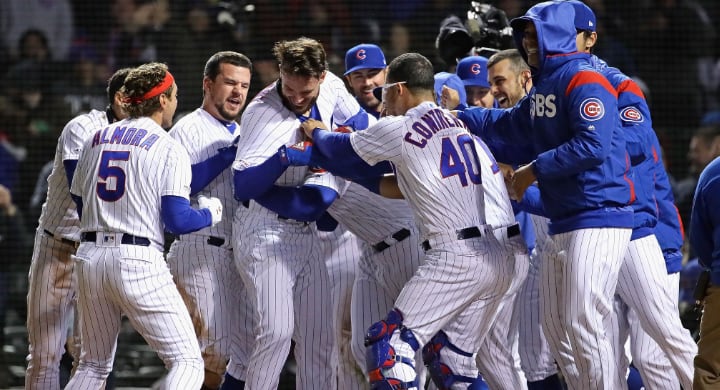 David Bote’s opposite-field, airplane-catching single may have been the first walk-off win for the 2019 Chicago Cubs (and the *fourth* in his extremely young career), but it was far from the only one last season. In fact, a total of SIX different Cubs delivered the final blow in a game at Wrigley Field last year, including four in the month of May, alone.

The second walk-off win for the Cubs last season came off the bat of Kris Bryant on May 7th, 2019:

That was the 6th home run of the season for Bryant, and his third career walk-off home run. He would go on to hit SEVEN more homers that month, bringing his May total to 10. But it wasn’t just power that he was flexing. Bryant absolutely went off that month, slashing .333/.443/.719 with 10 home runs, 5 doubles, a triple, and 18 walks (against just 19 strikeouts). As you might imagined, that was the second best month of his *entire career.*

That’s right. The second best month of Bryant’s entire career was last May. His best month – August, 2016 – is what won him an MVP award.

Before the 9th inning, the Cubs had managed just two runs on 6 hits and 4 walks, as Caleb Smith rolled through the Cubs lineup with ease, delivering one of his finest starts of the season by game score (6.2 IP, 5H, 2ER, 11Ks). But Jon Lester, pitching to plenty of hard contact given the conditions, got through six innings without allowing an earned run, keeping the Cubs in the game like he does (there were 8 hits, but with no walks he managed fine enough).

Looking back through the Enhanced Box Score from that game, I can see that the Cubs defense was not at its sharpest, including errors for Jason Heyward and Kyle Schwarber, the latter of which helped account for both of the Marlins unearned runs early on. Fortunately, leadoff man Albert Almora Jr. homered, and the bullpen was nails heading into the bottom of the ninth.

The bottom of the inning began with Jason Heyward drawing a walk, bumping the Cubs win expectancy from 63.3% to 70.7% per FanGraphs. That was followed by Kyle Schwarber working a seven-pitch at-bat into a free base (HBP) and Daniel Descalso sacrificing Schwarber to second and Jason Heyward to third (win expectancy: 84.1%).

Unfortunately, the prior hero, Albert Almora Jr., was not able to get the ball out of the infield, and Jason Heyward was thrown out at the plate, dropping the Cubs win expectancy all the way back down to 63.5% … where it was at the start of the inning.

But that doesn’t matter when you’ve got a red-hot Kris Bryant on your team.

With runners on first and third, a 1-2 count and two outs, Kris Bryant hit one 404 feet to center field, walking it off for the Chicago Cubs, while moving them into first place and 7 games over .500 at the time. What a night!

KRIS BRYANT IS BACK! pic.twitter.com/bhSibIc7uz

And the start of one crazy month …