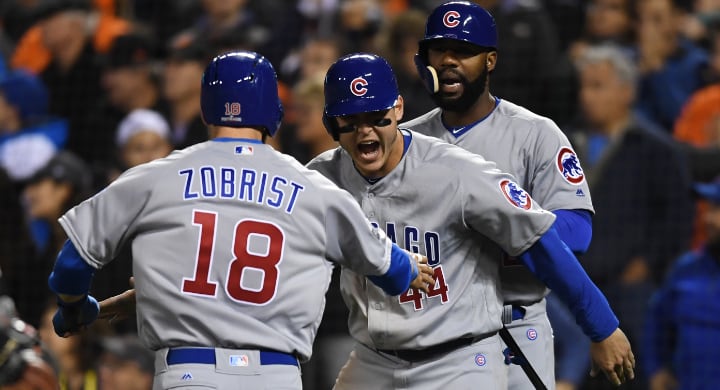 In the absence of baseball (grumble), Marquee Sports Network is re-running the top-14 games from the Chicago Cubs historic 2016 World Series run. And since I freakin’ love that idea, I thought we might play along by posting regular Pre-Gamin’ posts before each and every one. This is the third televised event – Game 1 was Wednesday and Game 2 was Thursday. They decided to skip Game 3 entirely, although it was a memorable one, which brings us to the series-clinching Game 4 tonight.

Well, despite Kris Bryant’s game-tying homer and Albert Almora Jr.’s brilliant diving catch in Game 3, the Chicago Cubs were not able to sit down the Giants early this time. Sigh. That would’ve been nice, eh? Obviously, they’ll still have two more chances to put the series away, but with tonight’s tilt in San Francisco and Johnny Cueto looming for Game 5 back in Chicago, things are a little more tense than I’d like.

In any case, John Lackey will take the mound for the Cubs tonight, making his first start since facing the Pirates at the end of the regular season (5.0 IP, 5H, 3BB, 1ER). He was limited – on purpose – in that one, to be better rested for tonight, which is a nice advantage of cruising into the postseason with such a commanding lead. Let’s hope he’s ready to go.

Meanwhile, the Giants will start Matt Moore, who just dominated the Dodgers and Rockies over his last two starts of the season (17Ks in 15.2 IP). Let’s hope the Cubs don’t wait 8.0 innings to knock this guy out. Or maybe that’s the right play? Yeah, maybe that’s it.

I don’t believe in the even-year nonsense, so I have no issue telling you that the Giants, who’ve won the World Series in 2010, 2012, and 2014, have won each of their last 10(!) games facing postseason elimination. Let’s end that streak tonight. Go Cubs.