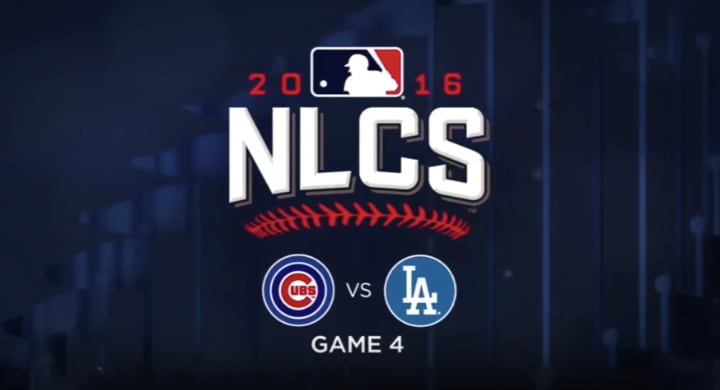 This is the fourth televised event – Game 1 of the NLDS was Wednesday, Game 2 was Thursday, the series clinching Game 4 was Friday, and the memorable Game 1 of the NLCS was last night. Fortunately, Marquee is sparing us the misery of the Game 2 and Game 3 shutouts, moving right along onto Game 4.

The Chicago Cubs have fallen behind the Los Angeles Dodgers two games two one on back-to-back shutouts, the first by Clayton Kershaw and the second by two-pitch pitcher Rich Hill. It’s been frustrating. It’s been stressful. I’m right there with you.

But this scoreless streak can’t last forever, right? At some point, the Cubs are going to break this thing open, I just hope they’re not pressing too much. Sometimes, all you need is something small to really get things going.

Hopefully, the offense wakes up and evens this series at 2 wins a piece before things get out of hand. And hey, win tonight and you’re heading back to Wrigley Field. I like the sound of that. Go Cubs. I still believe.