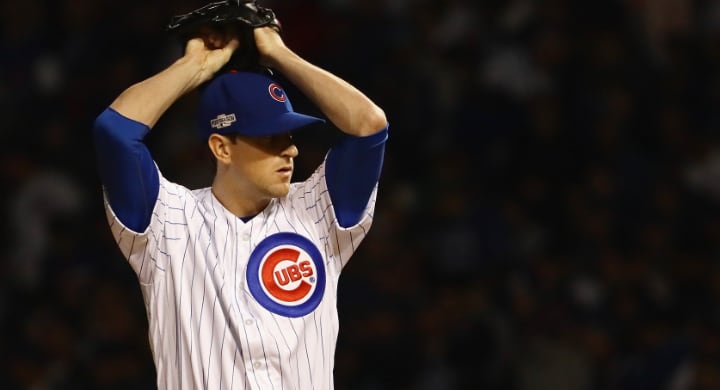 This is the seventh televised event – Game 1 of the NLDS was Wednesday, Game 2 was Thursday, the series clinching Game 4 was Friday, and the memorable Game 1 of the NLCS was Saturday. Marquee skipped games 2 and 3 of the NLCS, moving right along to Games 4 and 5 over the past two nights. And that means this is the big one. Well, the first big one. This is the night the Chicago Cubs punched their first trip to the World Series since the end of WWII.

I waited in line for about 3 hours to get into Old Crow to watch the historic Game 6 from somewhere in Wrigleyville, and as it turns out, it was actually worth the wait (they didn’t really overpack the place, which was nice). I drank about a hundred beers, I told one of my best friends that I planned to propose to my then girlfriend (now wife) after the postseason, and I watched the Chicago Cubs beat Clayton freakin’ Kershaw for a shot at the World Series exactly one week before my 25th birthday. I will never forget that night. I will never forget the absolute party in the streets – rivaled only by the Game 7 win. I will never forget the old ladies dancing on top of their Wrigleyville garages. I will never forget any of it. It was perfect.

This is a double-edged sword, eh?

On the one hand, I’m absolutely thrilled that the Cubs are on the doorstep of their first pennant in 71 years, with the ERA-leading Kyle Hendricks on the mound … at home, where he’s been utterly dominant all season (1.32 ERA in 95.1 IP) and against the Dodgers, whom he limited to just 3 hits, 1 walk, and 2 earned runs over 8.0 innings this season.

On the other hand, this is still the Dodgers and that’s still Clayton Kershaw on the mound. Poor playoff history or not, he’s a tough matchup – I think we all learned that the hard way (Game 2 7.0 IP, 2H, 0ER, 1BBm, 6Ks). In any case, with a southpaw on the mound, Joe Maddon has elected to go with the 22-year-old Albert Almora Jr. in right field instead of Jason Heyward, which is probably the right call (even if it would have driven you mad at the beginning of the season … that contract, man).

It’s not an easy match-up, but as David Ross said as he channeled his inner Ric Flair:

@RicFlairNatrBoy you have a fan in #cubs catcher @D_Ross3 pic.twitter.com/sRVXu4yWLE

That guy’s gonna be a great manager someday. Let’s hope the Cubs can send him off in style, by reaching and eventually winning the World Series in his final season.

But let’s not get ahead of ourselves. There’s a tough game on tap, a historic game even. Almost no living Cubs fans can remember the last time the Cubs were this close to the World Series. Enjoy it. You never know how long it’ll take for the next one.