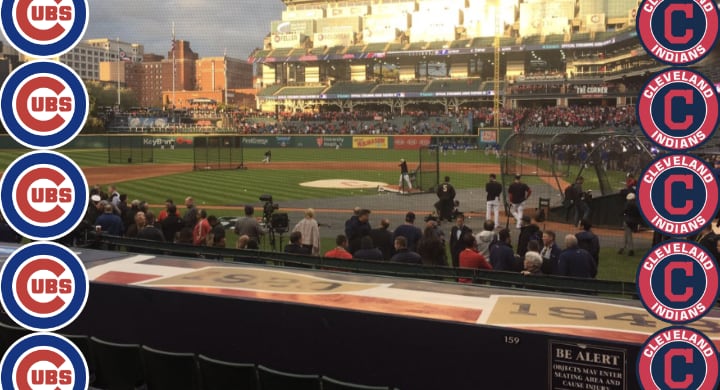 This is the eighth televised event – Game 1 of the NLDS was Wednesday, Game 2 was Thursday, the series clinching Game 4 was Friday, and the memorable Game 1 of the NLCS was Saturday. Marquee skipped games 2 and 3 of the NLCS, moving right along to Games 4, 5  and 6 over the past few days. Naturally, it’s time to move onto Game 1 of the 2016 World Series … which I was lucky enough to attend.

A day or two after the Cubs beat the Dodgers, I got a surprise phone call from a friend of Bleacher Nation, Jeff Ulrich, who happened to have an extra ticket to Game 1 in Cleveland. I was floored. As a 25-year-old blogger living in a 700 square foot Wrigleyville apartment, just weeks away from proposing to my girlfriend, this just wasn’t something I thought I’d ever be able to attend. I could never afford it. But here came this call out of nowhere, a literal miracle for someone like me. So I hopped in my car VERY early in the morning on October 25th, picked up Jeff, got some Dunkin’ Donuts, and drove us all the way to Cleveland.

Like an idiot, I tweeted a picture of my *full* ticket while waiting in line to get into the stadium, a decision I quickly regretted as the twitter replies began pointing out my stupidity. I deleted it quickly enough, but I’m not going to lie … my heart was POUNDING as we approached the gate, worried that someone was nimble and devious enough to steal the miracle ticket (digitally or otherwise) and keep me from getting into the stadium (or at least create a headache). I was equal parts embarrassed and nervous. Fortunately, everything worked out just fine and I made it into the game.

Outcome of Game 1 aside, a smile never left my face that entire night. To be perfectly honest, I didn’t even care that the Cubs wound up losing. I was at a WORLD SERIES game featuring the most lovable and bada** Chicago Cubs team of a generation. Kyle Schwarber was back. There were six more games to go. I peed next to Ryne Sandberg in the bathroom. I was on cloud-9. I know it sounds like I’m saying this only because things wound up working out in the end, but aside from watching them win Game 7 (and maybe watching Miguel Montero’s grand slam in the NLCS), Game 1 was such a defining moment of my Cubs fandom. All of my hard work. All of the losing seasons. All of the loyalty. It all paid off. I was at the World Series, watching my Chicago Cubbies do their thing. It was beautiful.

The Chicago Cubs are in the World Series. You made it. You’re alive. You got to see it. We still have no clue how the rest of the series will play out, but don’t sleep on how much this already means. It’s been more than 70 years since the Cubs won the pennant, and you’re here to enjoy it. That’s huge.

As for the game, well, it’s a big one. Despite having won NINE fewer regular seasons games than the Cubs, the Indians get home field advantage in this one, and that really stinks. However, it does allow for the return of Kyle Schwarber(!), who’s been out since his outfield collision in early April. How he’s possibly ready for big league action – against Corey Kluber, no less – is nothing short of a miracle, but maybe that’s exactly what the Cubs need.

With Schwarber at DH and Jon Lester on the mound, David Ross is behind the plate, leaving some relatively big bats on the bench (Willson Contreras and Miguel Montero). Also on the bench is Jason Heyward, who’s been replaced by Chris Coghlan tonight. Everybody else is at their usual spots around the diamond and in the lineup (man, it’s so nice to have a sure-fire leadoff hitter, isn’t it?).

Do you remember what Jason Kipnis’ ankle looked like that night?

Remember what Jason Kipnis' ankle looked like before Game 1 of the 2016 World Series? He played that night. Dude's tough as nails.

A lot of people hated this hat, but I loved it …

When your dog eats your lucky Cubs hat the day before you head to the World Series. pic.twitter.com/zjCXfAhlQz

The picture before the picture I sent with my fully visible ticket:

Almost there. It's getting real. pic.twitter.com/94Gpenjvu6

I miss having a leadoff hitter:

You go we go. pic.twitter.com/AkrL5ZVrZB