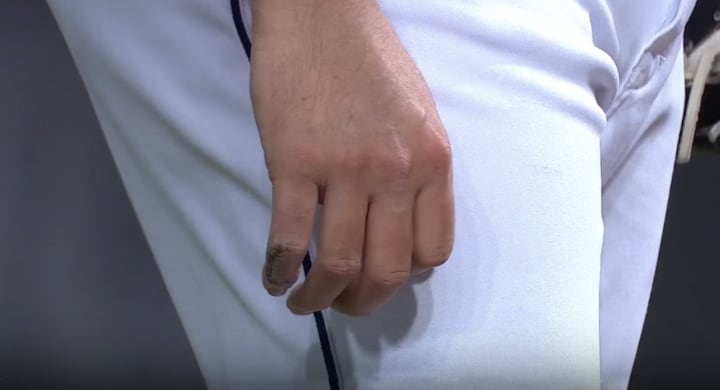 This is the ninth televised event – Game 1 of the NLDS was Wednesday, Game 2 was Thursday, the series clinching Game 4 was Friday, and the memorable Game 1 of the NLCS was Saturday. Marquee skipped games 2 and 3 of the NLCS, and moved right along to Games 4, 5  and 6. The Cubs Game 1 loss to the Indians was last night, which means it’s time for Game 2 tonight.

Brett was at this game – he went with the same friend of Bleacher Nation, Jeff Ulrich, who took me the night before – but he had a little better luck. Of course, he might’ve seen the Cubs first World Series win in 70+ years, but I saw their first World Series game. I think that’s better. It’s better right? I think it’s better.

The Chicago Cubs lost an important Game 1 last night in Cleveland, putting up very little fight against Corey Kluber and the Indians. Hopefully, they’ll have a little more luck with (an injured?) Trevor Bauer tonight.

I added the question mark because Bauer’s finger is apparently fine after getting into a tussle … with a toy drone earlier this month, but I can imagine it helps. Hopefully, the Cubs can get to him early and often. And for what it’s worth, he’s had a tough offseason so far, allowing three earned runs on six hits (two homers) in 4.2 innings pitched against the Red Sox, and lasting just 0.2 IP against the Blue Jays in Game 3 of the ALCS, after re-injuring/opening that finger.

On paper, you like this matchup for the Cubs, especially with their offense-heavy lineup.

Speaking of which, with Jake Arrieta on the mound tonight (come on, vintage Jake!), Willson Contreras enters the starting lineup behind the plate in place of David Ross. Meanwhile, Jorge Soler takes over for Chris Coghlan/Jason Heyward in right and Kyle Schwarber is still the DH. Schwarber didn’t do much last night in his highly anticipated debut, but he did look good given the circumstances. I bet he breaks through tonight against Bauer and the Indians tonight. I can feel it.

Go Cubs. Even it up.