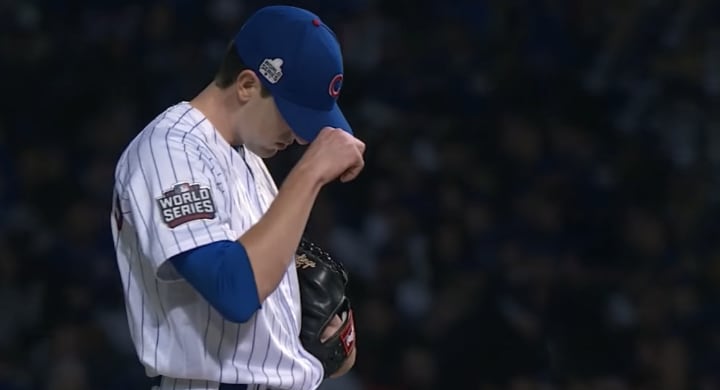 This is the tenth televised event – Game 1 of the NLDS was last Wednesday, Game 2 was last Thursday, the series clinching Game 4 was last Friday, and the memorable Game 1 of the NLCS was on Saturday. Marquee skipped games 2 and 3 of the NLCS, and moved right along to Games 4, 5  and 6 earlier this week. The Cubs World Series Game 1 loss to the Indians was two nights ago, and their Game 2 win was yesterday, which means it’s time for Game 3 tonight! Unfortunately, the Cubs lost this game despite starting 2016 Kyle Hendricks at home. Sigh. I wonder if they’ll bounce back.

Bring it back to Chicago, baby!

The Cubs managed to split the first two games in Cleveland, which is a huge accomplishment, given the three straight games at Wrigley Field beginning tonight. If the Cubs can win this one, they might even have a shot at clinching the World Series *at* Wrigley Field this weekend. Wouldn’t that be something?

Of course, to get there, they’ll have to win tonight with MLB’s ERA leader Kyle Hendricks on the mound. Hendricks, as you know, has been even better at home than he has been on the road this season, and is fresh off an absolute gem against the Dodgers in the Championship Series clinching Game 6 last week. The Indians are a less familiar opponent, but it’s easy to believe in Hendricks nonetheless.

Standing opposite Hendricks is the fly ball-busy Josh Tomlin, pitching in front of a howling 30 MPH outward wind at Wrigley Field. With that said, Tomlin seemed to work his curveball in heavily to induce more grounders in his other two playoff starts this fall, so we’ll see if he tries that again tonight.

Willson Contreras is behind the plate and Jorge Soler is out in right field. Everyone else is right where you expect them to be. Go Cubs.