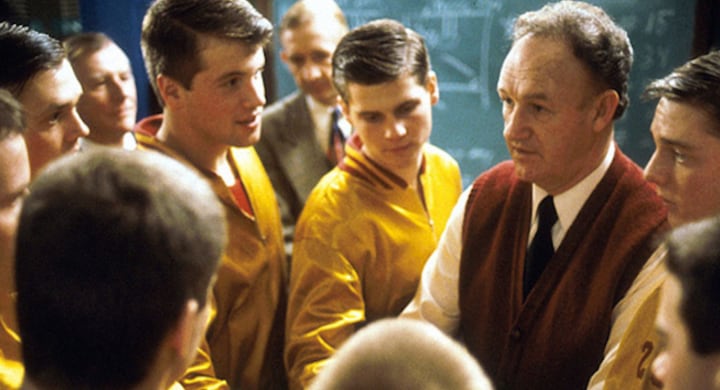 I should be at Wrigley Field right now, drinking an ice cold beer, despite sub-50 degree temperatures, watching the 3-0 Chicago Cubs extend their first place lead while securing their first home win of the season. Instead, I’m stuck at home for the foreseeable future with no baseball in my life. It’s not idea. But in place of Cubs games, we’ll continue watching sports movies together, because why not? It’s not the same, but it’s something.

Today’s film is yet another classic, with a unique writer/director combo – Hoosiers (1986).

This is probably one of the best basketball movies out there, but I’ll admit it, it’s been a long time since I’ve last seen this one. I remember the general story and the bigger moments, but it’ll otherwise be like a whole new journey, which I’m actually excited about. And I’m even more excited after discovering that the writing/directing combo behind this movie is also the same two guys who wrote and directed Rudy. I swear I’m not looking for these sort of connections, but there’s been so many already (Major League shared a writer with The Sting, which shared a director with Slap Shot). Turns out, people stick to what they know, I guess.

What makes Hoosiers special is not its story but its details and its characters. Angelo Pizzo, who wrote the original screenplay, knows small-town sports. He knows all about high school politics and how the school board and the parents’ groups always think they know more about basketball than the coach does. He knows about gossip, scandal and vengeance. And he knows a lot about human nature. All of his knowledge, however, would be pointless without Hackman’s great performance at the center of this movie. Hackman is gifted at combining likability with complexity — two qualities that usually don’t go together in the movies. He projects all of the single-mindedness of any good coach, but then he contains other dimensions, and we learn about the scandal in his past that led him to this one-horse town. David Anspaugh’s direction is good at suggesting Hackman’s complexity without belaboring it.

I’d rather be at Wrigley, but I’m legitimately excited to dive back into this one.