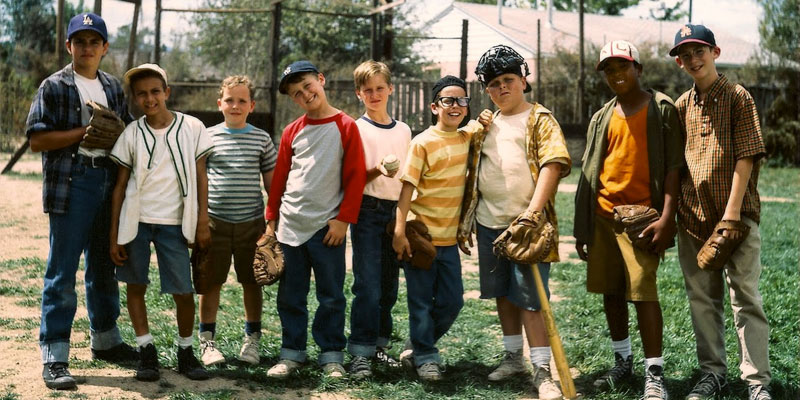 Tonight should have been the second game of the Pittsburgh series at Wrigley Field, where the Cubs would (of course) be vying for a 5-0 start to the season. Unfortunately, we’re still postponed. Fortunately, you have a lot to keep you busy tonight, including Game 7 of the 2016 World Series on Marquee Sports Net.

But if you still don’t have Marquee – or just don’t want to go through the stress of Game 7 – you can always join us in our rewatch-schedule (replacing each Cubs game with a sports movie), with your 10,000th viewing of The Sandlot!

Unsurprisingly, The Sandlot got the second most votes (49) of any movie in our Twitter poll, trailing only Major League. And honestly, what is there to say about this movie? It quite literally defined my entire childhood.

I was born in 1991, just two years before The Sandlot came out, so I certainly didn’t see it right away, but I can vaguely remember watching it on VHS (over and over and over) from as early as … I think first grade? My friends and played a lot of street baseball growing up and it was entirely because of this movie. We were constantly pretending to chew, calling our shots, and we even had our own version of “the beast” (an old, mean cop on our block who would *literally* take our tennis and whiffle balls away if they landed on his lawn (that is not a joke)).

And those friends/summers were the foundation of my baseball/Cubs fandom, which is literally my entire life today. I’m not trying to be melodramatic, but that’s how big of a role this movie ultimately played for me. I think anyone who grew up around this movie knows what I mean.

But that’s not where the impact ends. I’ve seen this movie a thousand times, I’m sure, but the most memorable experience came last summer, when I showed my 3 year-old nephew (and godson!) Joey it for the first time. He was absolutely enthralled by the movie … and asked to watch it again with me the very next day.

Introduced my nephew to The Sandlot yesterday and he asked to watch it again today. I’ve never been prouder.

…. So I signed “Babe Ruth” on a baseball and gave it to him. pic.twitter.com/M842gF6vMw

… He happens to be a de facto Sox fan because of his day, but we’re working on that.

In any case, if you haven’t seen this movie, you absolutely must watch it. And if you have, just go ahead and watch it again.

Fun Fact: Scotty “Smalls” mom is Marion from Indiana Jones: Raiders of the Lost Ark. Ever realize that?

“The Sandlot” is Getting Rebooted as a TV Show … WITH THE ORIGINAL CAST! https://t.co/nIOdYuvbbh pic.twitter.com/6kuvQeP4qa

The Brewers Absolutely Nailed Recreating a Scene from “The Sandlot” https://t.co/hhmzUWjfK9 pic.twitter.com/kfSnGtJHJg