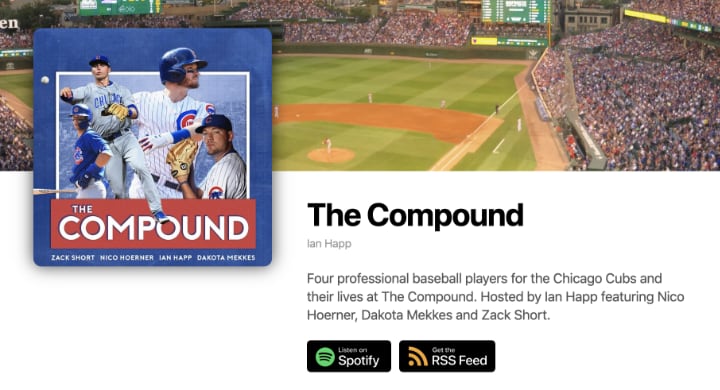 I’m bored, you’re bored, there’s no baseball, and we’re all stuck inside. That’s the (far-less-important-than-health) reality of this surreal global pandemic, sad and annoying as it may be. But even when things knock us down, we’ve got to find ways to be happy – and four Cubs players are helping us out.

Ian Happ, Nico Hoerner, Zack Short, and Dakota Mekkes are all living together in a house (a.k.a. “The Compound”) out in Arizona, and decided to launch a podcast for your listening pleasure. Episodes 1 and 2 are out now, and you should absolutely give them a listen.

In the first episode of The Compound, the guys sit down to discuss the highlights and lowlights of their quarantined daily lives, before nominating a house MVP. I won’t spoil the surprise by telling you who won, but I will say Person X earned the distinction for (1) bringing all FIVE garbage cans back inside by himself (while the other three guys played tennis), (2) having great energy in the grocery store, and (3) becoming Chef Boyardee for making everyone tacos for dinner.

The highlight of the episode, however, is when they each construct their ultimate, all-time, one-game lineup, for a theoretical Game 7 matchup. Any and all players were on the board, and there are predictably some good arguments to be had. Here’s a look at Ian Happ’s group, from Episode 1:

Happ had an explanation for that one, because … yeah what?: “A couple stats on Andy Pettitte. Andy Pettitte has 276.0 postseason innings, that’s about 70 more than anybody else. He’s got 19 wins, which is four more than the [next] closest … I mean the guy’s a winner. All he does is win. And if you’re gonna give me somebody in a one-game, must-win, I’m taking Andy Pettitte.”

After this, the guys answered a bunch of fan questions – apparently Ian Happ is a “freak” Harry Potter fan,” so … be sure to check it out!

In the second episode of The Compound podcast, the guys roll through their best and worst moments of the day and hand out another MVP award, before introducing the first guest onto the show: Kyle Schwarber!

But before we get into the Schwarber stuff, I just want to give a special shoutout to Zack Short, who apparently woke the guys up with fresh chocolate chip pancakes in the morning. If that’s not a high-quality roommate and house MVP, I don’t know what is.

Schwarber joins the show around the 11-min mark of the episode, and immediately goes into how he made his return for the World Series back in 2016, which is a really killer story. Even when he presents parts of it jokingly …

… You can tell it’s probably pretty close to what actually happened.

Schwarber then gets into the nerves of facing Corey Kluber (of all people) in the World Series (of all settings) after not playing for months and going 0-5 with 5 Ks against Kluber previously. I know we made a big deal about this return at the time, but I don’t think he really gets enough credit for that whole ordeal. It was an all-the-way gutsy moment.

The guys also answer some fan questions, including Kyle Schwarber’s favorite home run … which might not be the one you’d think (he’s got a few really memorable ones).

They’re both great episodes and you should definitely check them out and wait for more. In the meantime, I’m just waiting for my invite, which I’m sure is right around the corner.