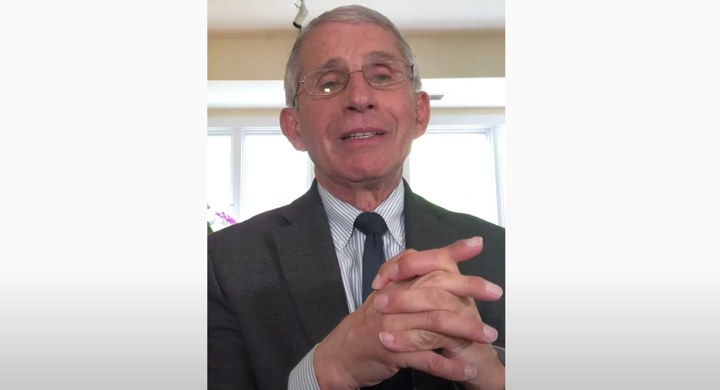 Depending on your perspective, you could see the latest from Dr. Anthony Fauci as good news, or a further bummer to your hoped-for vision of sports this year.

Dr. Fauci, the nation’s top infectious diseases expert and one of the most visible “trusted” voices on the COVID-19 pandemic, was asked today about whether sports can return this year – including his own hope to see the Washington Nationals play – and his answer was a pretty clear endorsement of something akin to The Arizona Plan: players live in a quarantined space (like a hotel), travel to the ballpark to play games for TV (without fans in attendance), and are tested regularly for the virus. His answer also contemplated that families could be involved, which was among the chief concerns of the players.

“There’s a way of doing that,” Fauci told Snapchat’s Peter Hamby in a video you can watch here. “Nobody comes to the stadium. Put [the players] in big hotels, wherever you want to play, keep them very well surveilled. … Have them tested every single week and make sure they don’t wind up infecting each other or their family, and just let them play the season out.”

I don’t think anyone would accuse Dr. Fauci of being cavalier when it comes to the novel coronavirus, so his perspective here carries some weight (in ways both encouraging and discouraging). On the one hand, if you can get over the logistical issues with having all the players performing under quarantine in Arizona, then he doesn’t seem concerned about the public health issues. That’s good to hear.

On the other hand, he does not sound particularly optimistic about antibody testing being in a position to allow fans to go to ballparks and stadiums any time over the next several months (there was not a precise timeline, but at the very least, the summer sounds out). Moreover, it’s actually not difficult to see why the post-outbreak public health concerns about such a relatively small pool of people playing under quarantine in one geographic location would be limited. What’s much more difficult to see is whether you could do it in a way that keeps the players safe from OTHER injury/health concerns (training issues, the excessive heat, etc.), whether you could have as many people there as all involved would want (families of not only all the players, but maybe even everyone who has to be there to do the work).

We have to keep in mind: Dr. Fauci is not an expert on whether this is a good idea for baseball players overall, or for MLB overall (or pick your sport). He is an expert in infectious disease, which means he’s coming at this from a perspective of, Is there a way to play sports that won’t pose an unreasonable risk of COVID-19 exploding unchecked? Yes, of course that can be done. It’s very good to know he doesn’t seem to have any concerns on that front. But that’s just one box to check on the list of hurdles.

Also, candidly, the more I hear about the state of antibody testing – and how it could or could not look in a couple months – I get a little discouraged about what sports can look like for fans until there’s a vaccine sometime next year.

The full interview from this session: