Notable Side Conversation: The Cubs Are Projected for the Highest Luxury Tax Payroll in 2021 Skip to content

It’s easy to lose sight of the many strategic/competitive/financial issues facing the Chicago Cubs in 2020 and beyond. Heck, it’s been proper to lose sight of that stuff for a while. We have kind of struggled to put this hat back on.

But those issues are waiting for the Cubs whenever baseball resumes whether we ignore them right now or not. And since there is not baseball to discuss at the moment, I think it’s worth checking back in on these issues.

For example … (1) Javy Baez, Kris Bryant, and Kyle Schwarber each have just one more year of team control after this season. (2) Tyler Chatwood, Jose Quintana, and Jon Lester (probably) are all free agents after 2020, leaving the 2021 rotation in the hands of Yu Darvish, Kyle Hendricks, and …? And (3) the Cubs already went over the luxury tax in 2019, may be stuck over it in 2020, and are threatening to three-peat in 2021.

For today, it’s issue No. 3 that I’m really thinking about, especially since the Cubs had previously made it very clear that they won’t be going over the luxury tax three years in a row under the current CBA.

Of course, as 2021 remains the final season under the current CBA, the Cubs could always get bailed out by some sort of premature change to the agreement. But I think that’s pretty unlikely. Indeed, if anything, the deal is likely to take longer than we expect, given that the pandemic has only exacerbated the many existing divides between the league and union.

So, then, we should assume that 2021 will operate under the current CBA, and in that case, the Cubs are already in a terrible on-paper spot relative to the luxury tax.

Craig Edwards did a nice job illustrating this issue at FanGraphs: 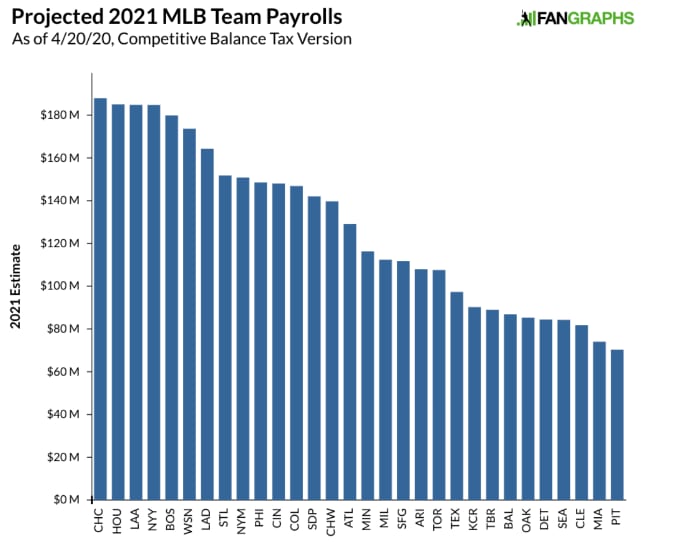 All the way on the far left side of the graph, you’ll find the tallest blue bar representing the Chicago Cubs projected $188M payroll for luxury tax purposes in 2021. The threshold will be bumped up another $2 million before that season ($210M for the first tier of the luxury tax), but that still leaves the Cubs only a small bit of wiggle room if they’re going to avoid third-time offender status (in a world where they cannot get back under this year).

As Brett explored this past offseason, the even bigger cost to the team is the loss of a portion of their revenue-sharing rebate.

If the Cubs are unable to get under the luxury tax in 2020 – which may be out of their hands, because of COVID-19 – they will have very little wiggle room to spend this coming offseason … for the third straight offseason. And note, while actual payments may vary in 2020 with or without a season, the Competitive Balance Tax payroll calculation will remain unchanged.

In other words: the Cubs’ luxury tax situation will not be bailed out by the pandemic.

If they can’t find a way out of the luxury tax zone, then you’re talking about $10s and $10s of millions of dollars of lost revenue-sharing rebates (hate it all you might, but every business draws a line somewhere). Moreover, if the Cubs are right up there at the limit and want to go nuts in free agency? Think about the tax: every $10 dollars the Cubs spend in free agency will cost them $15. Imagine trying to pay Mookie Betts $35M in 2021, but realizing it’ll actually cost $52.5M. You think that’s going to actually happen? Unfortunately, the answer is almost certainly no.

And that’s not even considering extensions for guys like Bryant, Baez, Schwarber, or Rizzo. Worse, if the new CBA somehow doesn’t address the luxury tax for whatever reason, the Cubs might just be at risk of going over AGAIN in the years beyond (which would make it all the less likely that they would actually extend fan favorites). I find that pretty unlikely, but with so many other issues now facing the league – including the potential loss of upwards of 40 MiLB affiliates – priorities may shift.

And if you do make your way over to Edwards article at FanGraphs (which you should), don’t be fooled by this rosy-looking picture: 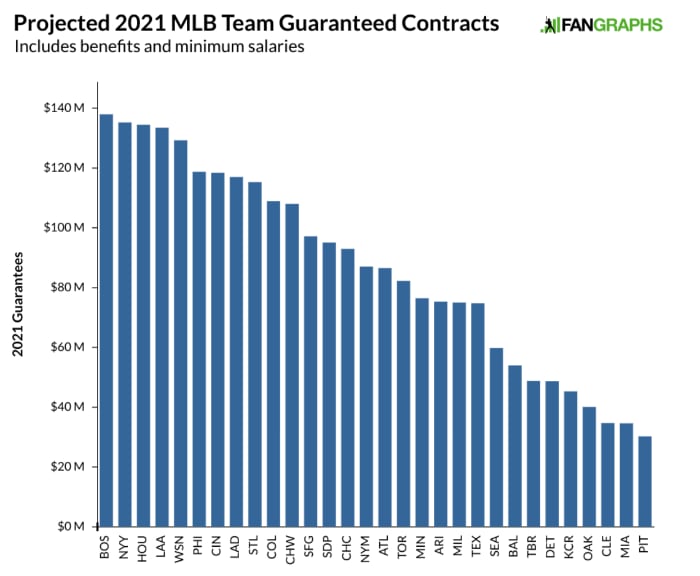 The Cubs “guaranteed” money may leave them in the middle of the pack, but salaries for arbitration eligible players like Kris Bryant, Kyle Schwarber, Javy Baez, Willson Contreras are going to be both necessary and expensive. And while you may be able to shed a few million dollars here and there if you were backed into a corner (Albert Almora Jr., Kyle Ryan, Ryan Tepera, Dan Winkler), guys like Ian Happ and Victor Caratini will be arbitration eligible for the first time.

Indeed, according to Edwards, the Cubs’ $72M in estimated arbitration salaries for 2021 is not just the most in MLB, it’s the most by $15M over the second-place Mets!

Now, the easiest way out of this problem is finding a way not to be over the luxury tax in 2020. Unfortunately, a mid-season trade may be impossible depending on which way the pandemic breaks (to say nothing of the competitiveness of the team, and the difficulty in trading away salary in this environment). The second easiest way out of trouble is an offseason trade that clears up a lot of money, but the only practical/effective options will be identical to the bait no one took this past offseason and the Cubs will be operating with less valuable assets (one year older, one year closer to free agency, probably considered “expensive” if revenues tank).

So you see … the Cubs are stuck in an awful luxury tax position with very few escapes. I sincerely doubt they’ll venture significantly over the luxury tax three years in a row, so if they don’t find a way out this season, prepare for yet another frustrating offseason ahead.