Sports TV Ratings and the Impact on Baseball, Rizzo the Captain, and Other Cubs Bullets Skip to content 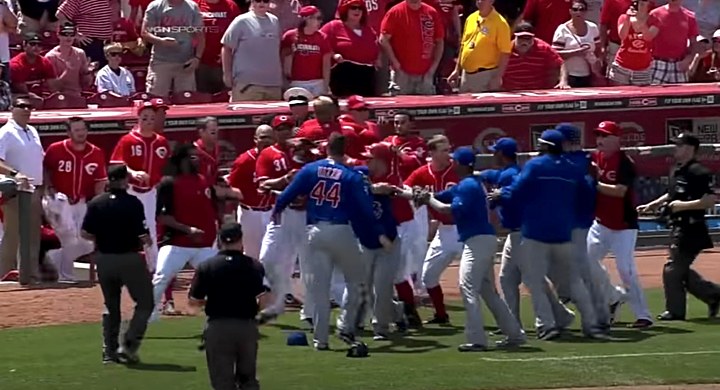 I didn’t remember how much I remembered about the ’90s era Bulls until ‘The Last Dance.’ I’m enjoying it so much for all the same reasons as everyone else, but I’m also enjoying the constant “oh yeah, I remember that!” I wasn’t a Bulls fan back then – I was all about the Jazz because I was a short kid who wanted to be John Stockton (who, by the way, was 6’1″, young Brett … ) – but I watched Sportscenter daily and was deeply into every sport. So yeah, I remember all these storylines, and it’s really fun to see them explored this deeply, looking back now.

•   I mention all of that in part just to mention it, but in larger part because I’m watching the doc. It’s on. It’s sports. So I’m watching. The NFL Draft this weekend? It was on. It’s sports. So I was watching. I expect it’s the same for a lot of you, and the ratings concur. The debut of ‘The Last Dance’ obliterated ESPN’s documentary ratings records (previously held by ‘O.J.: Made in America’), which is no doubt partly because it’s a compelling story, but getting twice as many viewers as the previous record is likely largely about the sports-related vacuum in content right now. Similarly, the NFL Draft’s ratings were up nearly 40%(!) for the three day event, and Day One (15.6M viewers) broke the 2014 record by more than 3 million people.

•   The nature of our current situation is such that there is not a lot of outside competition for our indoor entertainment options, and since there are no live sports, people are going to consume these kinds of sports-related events in much higher numbers than usual. That means you better believe the major sports leagues are going to be sprinting – where safely possible – to get their games back on the air sooner rather than later. The reality is that if and when they all get back on the air, we’re likely to be able to be outside quite a bit more, doing other things. Moreover, the more sports that get back on the air, the more sports-related competition for eyeballs. That means there is going to be a window of time, where if you were the first to get back, you would disproportionately benefit in terms of viewership.

•   You do kind of hate the idea that baseball would go too fast to get its games back and on the air, but we’d be naive not to think that MLB and its owners are not paying attention to these ratings data points. They know that if they had a Yankees-Red Sox or Cubs-Cardinals game on the air tonight on FOX, it would absolutely explode. That kind of timing is not realistic. Not even close. But you can see how the incentives work.

One @MiLB GM in Iowa believes that @MLB is using the COVID-19 pandemic to take advantage of teams while they negotiate a new PBA. https://t.co/DQqIMHJSyO

•   MLB was already seeking this team-slashing plan, and had been long before the pandemic. But with the financial state of MiLB in serious and maybe even existential peril, now is certainly an opportunity for MLB to get its way. I’m not sure that makes MLB any more or less “nefarious” or however those like Tornow might describe it, but no one can deny that the pandemic and associated sports shutdown is not fundamentally impacting the negotiations.

10 moments we missed from what should have been first month of 2020 MLB seasonhttps://t.co/t4nkUkLFi7

•   No real reason for this, I was just thinking about it last night:

•   I guess maybe it was because of ‘The Last Dance’? Like, I wasn’t explicitly thinking this way, but if you were making a documentary about the championship Cubs, you’d trace through certain eras (pre-rebuild, rebuild, competitive), and you’d absolutely see a ton of interviews about this Rizzo moment.

•   Here’s the full Rizzo-Reds clash if you don’t remember the context or just want to watch again:

(Thanks for supporting BN in the process!) pic.twitter.com/q0nbRgI7LU