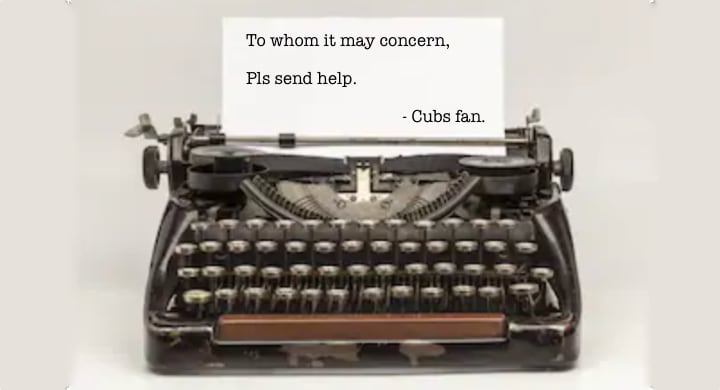 Although things haven’t been particularly peachy with the Chicago Cubs lately – they lost the division in 2018, missed the playoffs in 2019, fired Joe Maddon after the season, endured a winter full of Kris Bryant rumors, annoyed some fans with a somewhat fumbled launch of MSN, etc. – we’re still very spoiled by Cubs-fans standards.

After all, this is a team full of likable, long-term players, who reached three consecutive championship series from 2015-2017 and won the freakin’ World Series. On top of that, they’ve given us one Rookie of the Year (Kris Bryant), multiple MVP winners and finalists (Bryant, Javy Baez), Cy Young winners and finalists (Jake Arrieta, Jon Lester, Kyle Hendricks), and plenty of Gold Gloves (Anthony Rizzo, Jason Heyward … somehow not Javy Baez?). So I say again: We’re spoiled.

But just like my friend Jenny (from the block), I still know where we came from. And nothing expresses that “where” better than 1980s Cubs fans jokingly writing to other teams as a free agent fan looking for a new franchise (transcribed below for your convenience):

He stuck with the Cubs, working in stadium operations at Wrigley for 7 years after he retired. pic.twitter.com/UyumbL8wWT

From the Seattle Mariners:

ON behalf of the Mariners, I would like to thank you for writing to us, and for offering your valued abilities as a baseball fan.

In regards to your letter, I must say that we have the highest regard for the management of the Chicago Cubs. However, I also understand your frustration in following them closely over these many seasons.

In trying to remain consistent with the Mariner philosophy, we are not in the market for free agent fans at this stage of our development. We are trying to develop fans through our system, which we feel in the proper direction for a club just four years old.

When we reach the point that we are on the verge of going all the way, a fan with your experience may be what we need to put us over the top. At that time, you can be sure that we would be interested in acquiring your services.

Until then, we wish you the best in your career. We always appreciate top fans.

From the Montreal Expos:

I think I understand your frustration. Mainly because, as a Cub reserve catcher off and on from 1954 thru 1957, I partially lived thru a few of those years with you. And, to my chagrin, I did not exactly establish myself as a Hall of Famer. I wish I could say that I really contributed to the cause for which all you loyal Cub fans support.

However, if I also know anything about a long time and loyal Cubs fan – you will not only REMAIN one – you will WITHDRAW from your Free Agency threat and re-dedicate yourself to the Chicago Cubs.

The Trauma you would suffer trying to pull — which you really could not do — for another club would imperil your sporting health seriously.

Imagine yourself cheering for the Montreal Expos on the last day of the 1981 National League season as the Cubs and Expos go into the final day tied for first place ……..

From the Milwaukee Brewers:

It is a pleasure to make an offer to a free agent that does not have to include a five year guaranteed contract.

While I am sorry to see you take your affection away from the Cubs where some of my good friends work, we would be happy to have you adopt the Brewers as your favorite club. Actually I’d be happy if you rooted for us in the American League and stayed with the Cubs in the National League since it seems only fair that after all your suffering for two decades you should still be rooting for the Cubs when they turn it around and start to have some success.

In any event, the best offer I can make you is that the management here will make a concerted effort to make this club a championship one very soon. While there are no guarantees in this business, I think I can tell you that the ’81 season will be an exciting one in Milwaukee and that you will have a chance to follow a lot of players with outstanding talents.

This offer is open-ended and you may accept when you choose to do so. There is only one condition tied to the offer. If by any chance some of the Cubs’ misfortunes the past few years are because of your association with them, then we really would rather you adopt the Yankees!

So let’ me just get this straight …

The Mariners were like “Thanks, but we’re not in the market for free agent fans.” The Expos were like “You can’t leave the Cubs! You’ll regret it when they’re good!” And the Brewers were like Derp! Okay, come on over lololol!lol! And not just that, their message stinks.

•   “It is a pleasure to make an offer to a free agent that does not have to include a five year guaranteed contract.” Cheapskates

•   “…we would be happy to have you adopt the Brewers as your favorite club. Actually I’d be happy if you rooted for us in the American League and stayed with the Cubs in the National League…” Make up your mind.

•   “… will make a concerted effort to make this club a championship one very soon.” Wrong. Brewers have not won the World Series literally ever, because they’re so bad.

•   “…the ’81 season will be an exciting one in Milwaukee.” They won their division, but it was probably, like, the easiest division ever or whatever.

•   “You will have a chance to follow a lot of players with outstanding talents.” They had three all-stars, big whoop.

•   “If by any chance some of the Cubs’ misfortunes the past few years are because of your association with them, then we really would rather you adopt the Yankees!” So … you only want a new fan on your conditions? Real nice, Milwaukee.

Basically, the point I’m trying to make with this post is the Brewers suck. Er … wait. I mean, be happy you don’t have to sell your support to the highest bidder. Yeah. That’s it.