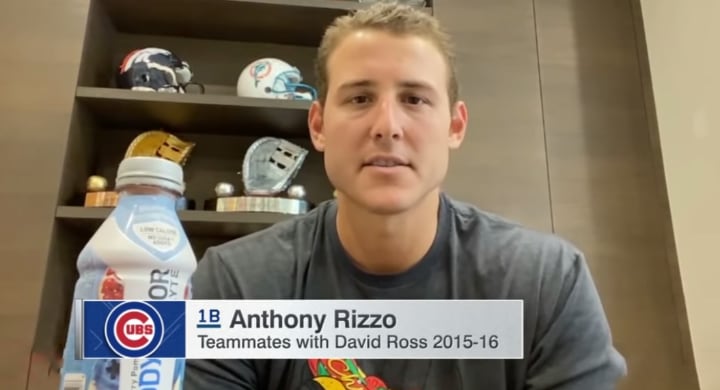 For better or worse, in times of great peril, we turn to our leaders – local, national, religious, what-have-you – for guidance, or even just for some semblance of normalcy. And since I don’t think it’s much of a stretch to call now a time of great peril, that got me thinking … whom are the Cubs leaders?

Anthony Rizzo is a pretty easy start. He’s been with the big league team for eight years – longer than any other player on the roster – and he’s the unofficial captain of the squad. He’s also been recognized for his exemplary work in this and other communities, even when times are good.

From the other position group, Jon Lester fits the bill. He’s a 14-year MLB veteran, he’s been on the Cubs for five seasons, he’s the rock of the rotation, I’d follow him into battle, etc. Jason Heyward has grown into a leadership role, and not just because of a single rain delay speech. He’s vocal in the clubhouse and leads by example, even after getting a big payday. And finally, we haven’t seen it yet, but Jason Kipnis strikes me as a leader. The 9-year MLB veteran is coming back home to (possibly?) finish his career out for his hometown Cubbies, while attempting to fill the void left by another former Cubs leader, Ben Zobrist.

From these leaders, there’s no need for speeches of great consequence or insightful rhetoric. Just hearing from them makes life feel a little bit more normal. So here’s each of them speaking over the past two days. I hope it helps.

Anthony Rizzo jokes about avoiding the “Quarantine-15 lbs,” and discusses David Ross’ impact as manager: “Rossy’s been amazing. He’s set the tone, along with us players at camp, but he’s set the tone.” Rizzo also identified himself (and his teammates) as caged animals, just waiting to get back out to perform.

Rizzo also discusses his personal relationship with Ross and how that’ll affect their professional relationship, keeping his mind and body straight during quarantine, asking to use a neighbor’s batting cage, his concerns of an MLB return, and more.

No video or audio for Jon Lester on this one, but he did recently speak on a segment with David Kaplan, beginning with the shock of the hiatus: “We’re literally 10 days away from Opening Day, and they’re like, ‘All right, go home.’ That was a big shock for me, to go from doing the baseball stuff and now I’m at home. And now I’m back in offseason mode and can’t do anything.”

But the meat of the interview was Lester’s exchange with nurse Josh Paturi, who was also on the show discussing the “surreal” experience of dealing with sick and dying COVID-19 patients: “Every day is different,” he said, “but really I’m just trying to fight the anxiety of it all. Everybody’s anxious about what’s going on; everybody’s kind of putting their health at risk going to work right now, but at the same time, everybody’s stepping up.”

Lester responded: “I don’t think [first responders] get enough respect from us citizens and people that need them on a day-to-day basis,” and then invited Paturi out to Wrigley as soon as the Cubs are back: “When we get this thing going and fans are allowed back,” he said, “we’d love to have you out on the field and do some BP and hang out for a while.”

Jason Heyward on 670 The Score:

Heyward joined 670 The Score to also discuss playing for David Ross, while likening the 2020 season to the vibe of the 1998 Bulls during the events of The Last Dance: “Playing for Rossy, it just gives me chills. It just gives a lot of us chills, because we know his intensity. We know he knows how to push our buttons. We know we want to run through a wall for him. And there’s no question, we know we’re going to get it straight from him — the good, the bad and the ugly.”

Heyward credits the front office for knowing when to “pull the trigger” on bringing in Joe Maddon and knowing when it was time to hear a different voice.

He discusses the soon-to-be separating core (post 2021) and how the valuable lesson this team gleaned in missing the playoffs in 2019.

There is video of Kipnis, being interview from his home in Northbrook, but Marquee does not allow embedding (which … LOL). With that said, he does have plenty of important things to say. Among them, sharing his own anxiety is both sobering and reassuring:

“It just seems like [playing at Wrigley Field in front of my family and friends] will never happen right now,” Kipnis said. “I try to stay positive, I try to reassure myself at times that it’s gonna happen — just stay patient. You just never know what’s gonna happen down the road or in the future or this year on forward. For now, we’re just gonna keep our fingers crossed and hope that it does happen this year.”

Kipnis goes on to address the various proposals, hopeful that they’ll work, but cautious in the likelihood and motivations: “I think a lot of guys, one thing we can all agree on is we want to play this year. I think everyone just wants to make sure that it’s safe and a reasonable way to do it. I don’t think we want to force the issue. If they find a way to make it happen where we all agree that it’s a safe way to take that next step forward, I’ll be ready to go.”

Kipnis also discusses his love for Sammy Sosa, calling him “captivating,” and “must-see” television in his prime: “That did a lot for hooking me on the game of baseball.”