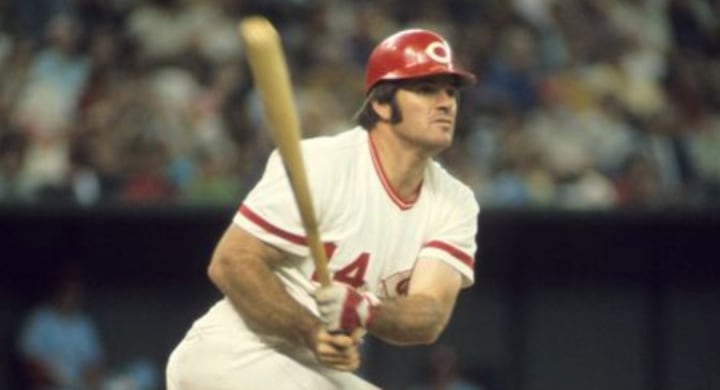 Earlier today, I had the absolute pleasure of stumbling into a video of Ichiro Suzuki meeting Michael Jordan for the first time back in 1995 and it’s really something. A then 21-year-old Suzuki, fresh of his first 200+ hit season in Japan, was nothing but a giggly mess and it’s just wonderful to watch it unfold all these years later (especially knowing the player Ichiro was about to become).

If you haven’t checked that out yet, please do.

Speaking of which … Ichiro, as I’m sure you know, finished his big league career with 3,089 hits, a fair distance behind MLB’s all-time hit leader Pete Rose, who went into the history books with a grand total of 4,256. But there’s a new, damming wrinkle to his already tainted image.

If you can believe this, a former groundskeeper for the Montreal Expos alleges that Rose corked his bats – at least, for one season in 1984: “Pete Rose would have his bats corked in the visitors’ clubhouse at Olympic Stadium,” Joe Jammer said to the Montreal Gazette. “I found out he was corking bats.”

That is obviously a very serious allegation for MLB’s hit king, especially given his accomplishments, but it’s not like Jammer doesn’t have details (more of which you can find in the original article). Worse, Jammer contends (er, was told) that Rose had been corking his bat for 20 years, and no one ever checked him because “he’s a singles hitter.”

Another source later confirmed Jammer’s story and Bryan Greenberg, an equipment manager at the stadium who was allegedly the one providing Rose’s corked bats, refused to comment. Yikes. And, yeah, sure, he’s already serving a lifetime ban from baseball, but remember, he asked to be reinstated about 5 years ago … and was denied.

A Practical Joke from a 1983 Boston Radio Show Basically Led to Pete Rose’s Ban from MLBhttps://t.co/JXZJWTn8zi

When the Dodgers sent Alex Verdugo to the Red Sox as the key part of a package for Mookie Betts and David Price this offseason, it seemed to work more in their favor than it does today. At the time, Verdugo was rehabbing from a stress fracture in his back and likely to miss the first 4-6 weeks of the season.

But today, due to the COVID-19 outbreak, the deal looks a little different for both sides. The Dodgers are likely getting far fewer games of control over Betts than they had originally planned – which isn’t to say he can’t still help them win in whatever’s left of this season once it gets going, but is to say he’ll have significantly less time (and opportunity) to make an impact – while the Red Sox are going to play the entirety of this season with their newly acquired Verdugo, who is now fully healthy. That’s not exactly apples-to-apples, I know, but clearly the deal looks different now than it did before the hiatus

In any case, he’s healthy now: “Yeah, physically I’m 100 percent,” Verdugo said to MLB.com. “I feel very good. Just moving around with everything, my swing, my throwing, running, I feel really good. Whenever the season starts, I think I’ll be ready. Whether that is soon, whether it’s a few months down the road, or whatever they may be, I think physically I’m ready.”

Obviously, Betts is a safer bet to help the Dodgers this year than Verdugo would have ever been, but I just find the evolving calculus of the trade fascinating, even if the cause is obviously quite devastating.

As discussed this morning, the KBO will begin their season tonight at midnight our time, which is great news because ESPN has come to an agreement to broadcast six KBO games per week – one game every day besides Monday – plus the KBO postseason. The broadcasts will feature commentary in English and the first one is being called tonight by Karl Ravech and Eduardo Perez on ESPN2.

A matchup between the Lions and Dinos will air tonight at 1am EST.

I’ll be sure to let you know when “our” team, the Lotte Giants, have their first televised matchup.

This might be the best introduction possible to KBO bat flipping. The standard style is a two-handed, tomahawk-released, end-over-end projectile. The two angles here really sell it. pic.twitter.com/ImWDetOll8

I mean look at these things!

I don’t know what this is. I don’t really care, either. It's great. pic.twitter.com/C6xHWWsyHg

There are many more to enjoy, so click over if you’re so inclined.

A few weeks ago, I shared a story of Mike Trout beating his entire high school baseball team in a home run derby left-handed (the only way they’d allow him to play), though I sadly didn’t have an actual footage of the event. But if you were afraid that we’d only ever get to see the potential of a left-handed Trout with camera trickery, you’re in for some luck.

MLB.com took up the same HR Derby story and, with the help of Ben Lindbergh, tracked down some footage of Trout batting left-handed (he switches about half-way through):

Here's the video of @MikeTrout taking batting practice in high school (first righty, then lefty!) that we talked about on @EWPod today. pic.twitter.com/4lh7I0WfvU

“They didn’t want me to hit righty, because they thought I’d win too easily. So I just hit lefty. And I won that, too.”

Over at BN Bulls, I took a look into Michael Jordan’s time as an MLB prospect, which, frankly, i think people misrepresent. Was he a stud? Nah. No. But what he did *was* impressive.

More than that, at the end of his one year at the Double-A level, he played in the Arizona Fall League with a cache of legitimate future stars like Derek Jeter and Jason Giambi.

When Michael Jordan Was a Baseball Prospect in the Arizona Fall League https://t.co/SZcakWrA7A

Neil Ramirez knew he was going to throw a ball, but so did Big Papi …

Here are the final, definitive, absolute, unquestioned rankings of every single MLB mascot.

The Final Definitive Rankings of Every MLB Mascothttps://t.co/cilYYXy9AT