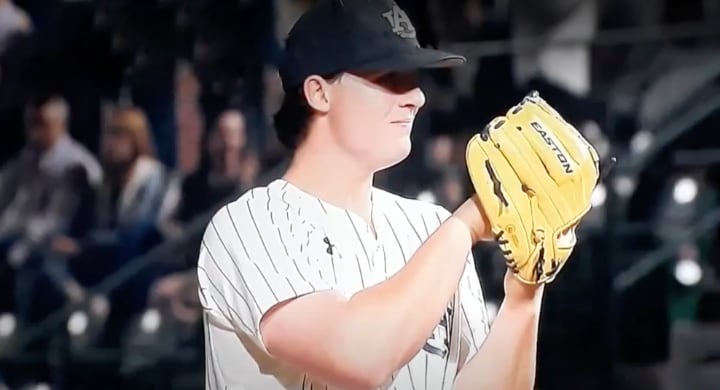 In a cost saving measure I think the league may ultimately come to regret, the 2020 MLB Draft will be limited to just five rounds this June. It’s a bummer, it’s going to fundamentally change the upcoming drafts, and it’s going to artificially limit the influx of talent into the sport, potentially turning some (would-be) talented and popular players away for good. Alas. The decision has been made.

We must still track and follow the available prospects and hope the Cubs can make the best of a bad situation in this year’s draft, which starts in just about one month. And, hey, at least their first pick – No. 16 overall – comes higher than any pick they’ve had since taking Ian Happ 9th overall back in 2015.

And to that end, I present to you an early mock draft from Kiley McDaniel at ESPN+.

As McDaniel explains early in his post, the mock he shares is an actual projection of what *will* happen on June 10th, based on leaked intel and sourced conversations. So these are not his rankings of each prospect, but rather an actual projected outcome of the first round. You can check out his full article for all the details, but we’ll focus on the Cubs here today.

With their first of five picks in the 2020 MLB Draft, the Chicago Cubs will take … right-hander Tanner Burns from Auburn University. Here’s what McDaniel has to say about the pitcher:

Burns has the best fastball command in the draft and, along with Detmers, might move the quickest through the low minors. The Cubs need MLB-ready young pitching depth, so Burns fits a need and is a solid value choice with a long national scouting track record dating to his high school underclassman days.

With very little ability to scout players this year, a guy who’s been “known” for a while like Burns is going to make sense for a number of teams.

I won’t pretend to know more about Burns than I do – which is very little – and I’m certain McDaniel is better at mocking picks to the Cubs than I will ever be. But something about his reasoning throws me off. Are the Cubs really going to draft a pitcher just because they STILL need young pitching depth? Moreover, I’d argue that a “solid value choice” is exactly not the direction they need to take their minor league pitching structure. Heck, look at their selection of Ryan Jensen last year – huge risk, but huge upside.

If I had my choice among completely generic prospect types, I’d prefer the higher-risk, higher-upside pitchers than a safer college arm. Indeed, the very next projected pick is high school right Mick Abel, who comes with some of the highest risk/reward among pitchers in that round. Oh, and before either, I’d probably just take a bat.

However, this isn’t the full picture. While the Cubs have historically drafted pitchers with mixed results, there is an entirely new draft infrastructure in place. If you recall back before the madness of COVID-19 (and this frustrating offseason), you’ll remember the name Dan Kantrovitz. The former assistant GM and draft guru has made a name for himself as a future GM candidate on the back of his strong drafting prowess … with the Cardinals (and then the A’s).

Here’s something we covered at the time:

In just three drafts, Kantrovitz was able to collect 31.7 WAR out of his pitchers – and it’s not like any of these guys are nearing the end of their career – Flaherty, 24, alone, just had a near-5.0 WAR season. And it’s not like I expect Kantrovitz to hit as well as he has in the past, but that success with identifying arms is real.

So I guess what I’m saying is if McDaniel is really projecting this pick because of things he’s heard and if what he’s heard comes from or around Kantrovitz, then I’ll very open to the selection.

In three seasons at Auburn, Burns posted a 2.86 ERA and 14-9 record over 188.2 innings spanning 37 appearances, including 36 starts. The Decatur native struck out 210 while walking just 67 and limiting opponents to a .218 batting average, including just a .188 mark this spring before the season was suspended in mid-March due to the coronavirus pandemic.

Bryan had some thoughts back in February:

His brief career numbers at Auburn:

And here he is throwing a 15-K shutout as recently as March: