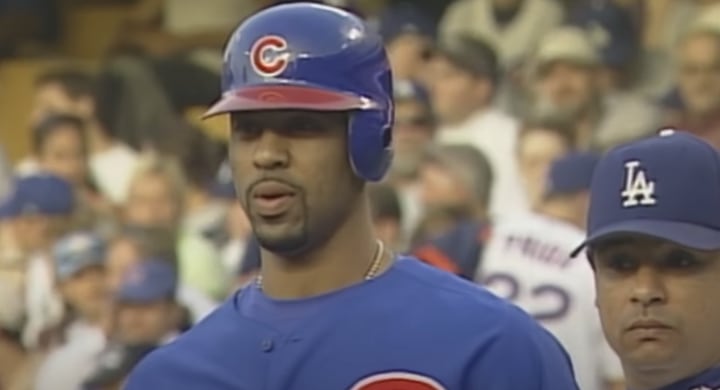 Over the weekend, I was thinking about former Cubs first baseman Derrek Lee, and his insanely productive 2005 season, during which he made the All-Star team, earned his second Gold Glove award, became a first-time Silver Slugger, and finished 3rd in the MVP voting.

And that led me to this great game against the Dodgers back on June 1st, 2005, when he was at the absolute height of his powers:

Derrek Lee was UNSTOPPABLE in 2005.

His slash line by the end of the day?

By the end of that day, Lee had a 200 wRC+, which means he was effectively 100% better than the league average player at the time (I just really love saying that). Unfortunately, he’d go on to break his wrist the following season and never quite return to his former glory. Or so I remembered.

It was also good for the 32nd best overall offensive performance in Cubs history and the 6th best Cubs offensive season since the turn of the century. So I guess my point is … Lee *did* make it back to the top of the mountain after the heartbreaking injury in 2006. It just took him a few years to get there.

Today, the league will discuss its plans for the 2020 season in a conference call with owners. Tomorrow, that plan will be presented to the players union. With any luck, both sides will keep the long-term health of the sport in mind and come to an agreement that puts baseball (safely) back in our lives as soon as possible.

NOTE: I’m not particularly optimistic about that – given the revenue-sharing proposal that came out earlier today – but perhaps still they can still work through it. Positive thoughts. Optimism. Hope. Etc.

But bringing baseball back *safely* isn’t a binary proposition. Even if we had sufficient testing capabilities, certain players with complicated medical histories are at a far greater risk if they do catch the virus. For example, David Dahl had his spleen removed in 2015; Scott Alexander, Adam Duvall, and Jordan Hicks have diabetes. Carlos Carrasco was diagnosed with leukemia last season, and Kenley Jansen has undergone two heart procedures.

And then there’s the Cubs’ two cancer-survivors, Jon Lester and Anthony Rizzo.

Rizzo was one of the players to address this issue with Ken Rosenthal at The Athletic, and while his individual case is strong, the issue remains alarming. “I’ve spoken to my doctors,” Rizzo said in April. “Obviously, this thing is unstoppable if it gets you the right way. But they said I’m cured and as strong as ever and that everything functions the right way. If I was to get it, they’re not overly concerned, like they would be with older people who have had conditions before.”

If the league eventually re-opens, players almost certainly *are* going to end up catching COVID-19, but they’re not all in a position to fight it off safely, as we might otherwise expect. This is very important to keep in mind, as the union likely demands as many safety guarantees as they possibly can out of any such deal.

Sadly, the 2020 MLB Draft will be only five rounds. Although nuance definitely abounds, the decision to shorten it *this much* still strikes me as an enormous mistake the league will eventually regret. In any case, the Cubs first pick in the 2020 draft comes at No. 16 overall. And given this front office’s history of success drafting hitters, I thought you might want to take a look at the CBS’s ranking of the top-25 position playing draft-eligible prospects.

Although, for what it’s worth, the latest mock draft projects a college pitcher – Auburn right hander Tanner Burns – to the Cubs with their first pick:

Informed Mock Has the Cubs Taking College RHP Tanner Burns in the First Round of the 2020 MLB Draft https://t.co/RlYrPxTJEE pic.twitter.com/MOZDCdfuUl

The Cubs Had the Coolest Prospects

Don’t judge MLB.com for identifying the coolest player on every team in MLB … we all need content right now, and we’re doing the best we can.

In any case, I’m sure we all know that Javy Baez was chosen as the Cubs coolest player – and for good reason: “A strong argument that he is the coolest player in the game. If an alien came to Earth and you needed to explain to them why baseball is so fun, having them watch Báez play a game would be an excellent place to start.”

So, basically, the Cubs had the coolest prospects.

No WBC in 2021, No Olympics for Major Leaguers

The World Baseball classic took some time to get off the ground, but anyone that remembers the last one – in 2017 – knows it finally caught a stride with the introduction of the Cubs coolest player:

Source to ESPN Deportes: World Baseball Classic will not be played in 2021

That is yet another frustrating blow to a sport who’s been taking hits in popularity each and every year. Hopefully, the WBC can get back on track soon enough. With the right players, we know how it can take off.

Relatedly, Bryce Harper thinks it’s “dumb” that Major leaguers can’t play in the Olympics, to which I agree:

Given how much has happened between then and now, Bryce Harper’s free agent journey feels like ancient history, but a new wrinkle found its way to the spotlight here in May. According to Harper, he met with the team owners around Christmas 2018 and told his agent, Scott Boras, to “get a deal done” with the Nationals thereafter. But when the offer came in, well, I’ll let him explain it: “I got back an offer, man, and it hurt, Harper said. “So we kinda just turned the page.”

As you may recall, we eventually learned that Harper’s deal would’ve deferred money until 2072 – LITERALLY – which just seems so abundantly short-sighted. Clearly, Harper was willing to return to the Nationals, but if your first offer is so bad that even a player who wants to return is forced to turn the page, you missed the mark. I’m not saying something *had* to get done, but do actually insult him like that? Come on.

Harper also mentions a huge one-year offer from the Astros, a big push to sign him from the White Sox, and the Dodgers four-year deal with a huge AAV.

Playing Baseball in a Pandemic

Former Brewer Tyler Saladino is playing baseball in the KBO – one of only five Americans in that now active league – and he explains what it’s like to play baseball right now via MLB.com:

“You have the job to do, but honestly, it really hits me every time I get to go out there right now,” Saladino said. “It kind of stinks playing empty, quiet games. We’ve still got our cheerleading band banging the drums and they play stuff over the speakers, but the lack of fans does make it feel kind of weird. At the same time, knowing that everyone was back home getting to watch it — man, it’s hard to describe. It’s surreal.”

Given the success of The Last Dance, I imagine sports producers everywhere are scrambling for the next big documentary. We already heard of the Summer of ’98 documentary in the pipeline, but now there’s another one to put on your calendar: