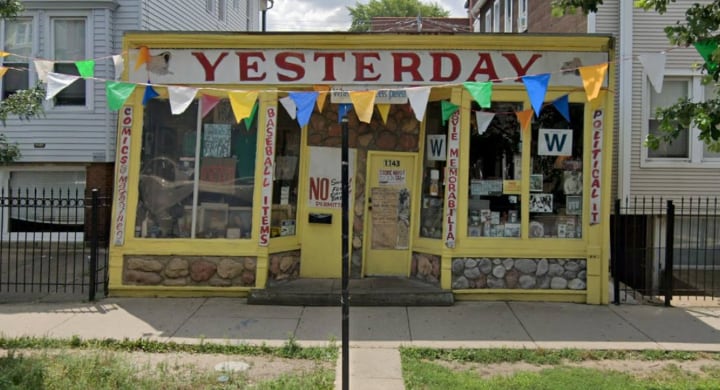 I want to handle this carefully for two reasons: First, and most simply, not all change is bad. I really believe that. And I think *much* of the change around Wrigleyville has been for the better (just because something is old doesn’t mean it’s good). Second, and more specifically, I’ve been inside the enjoyably grungy YESTERDAY nostalgia shop on Addison, just west of Clark, exactly once in my entire life, and never bought a single thing. That was my mistake.

And that’s why I feel great regret and sadness today:

According to Chicago Cityscape, the YESTERDAY nostalgia shop you’ve passed by 1,000 times on your way to Wrigley Field will soon close its doors permanently and be turned into another disappearing-neighborhood three-flat. Is that better than Harley-Davidson dealerships, fancy bowling alleys, or out-of-place bars? I guess. It’s less visually intrusive. But I can’t be the only one who saw that place as a landmark. It’s an institution. It’s in nearly every single memory of every trip to Wrigley Field.

But again, that’s very hypocritical coming from someone who never patronized the place. You have to support the places and things you love – perhaps now more than ever – if you want them to stick around. I suck.

To be sure, this is something we saw coming. YESTERDAY owner Tom Boyle died back in December after a long illness. And his nephew, Max Zelenka, indicated that they’d have to shut down at some point this year. As the Chicago Tribune points out, “Boyle owned the building and the game-day parking lot right behind it, and for several years, what Boyle had earned from parking was primarily supporting Yesterday.”

How I wish I could go back in time, walk over to that storefront right now, and buy something. Anything. Unfortunately, Boyle is gone and our inability to go visit now is just another reminder of the pandemic-related limitations of our current existence. I don’t mean to be such a bummer, but this really does hit me hard in a way that connects to the Cubs and Wrigleyville.

In a neighborhood that’s lost so much of its original character – in ways good and bad – YESTERDAY stood as a very explicit beacon of the past, and a reminder of what once was. And, heck, that’s just based on my own personal experiences passing by. I didn’t even know half of its rich history (emphasis mine):

Yesterday opened in 1976 and soon became a fixture of the neighborhood. Somehow, perhaps by nature, it never looked new, but squat, ramshackle and increasingly out of place. The building, first a barber shop, then a TV repair store, stood on Addison since the 1880s, pocket-sized yet impossible to miss in a Wrigleyville that’s been gentrifying for ages.

The Tribune also recounts tales of stars like Mark Hamill, Carrie Fisher, Harrison Ford, Eddie Vedder, Jimmy Kimmel and others stopping by the store at one point or another in its 44+ year presence.

The last thing I want is to come off as one of the “Don’t you dare touch Wrigleyville!” battle-crying preachers, but man … things have changed. And right now, every change hurts just a little bit more. The character of Wrigley Field and Wrigleyville does matter. Soon, it’ll lose one of its brightest, yellowest, dustiest, ever-so-slightly slanted storefronts.

Goodbye, YESTERDAY. We didn’t appreciate you enough while you were here.