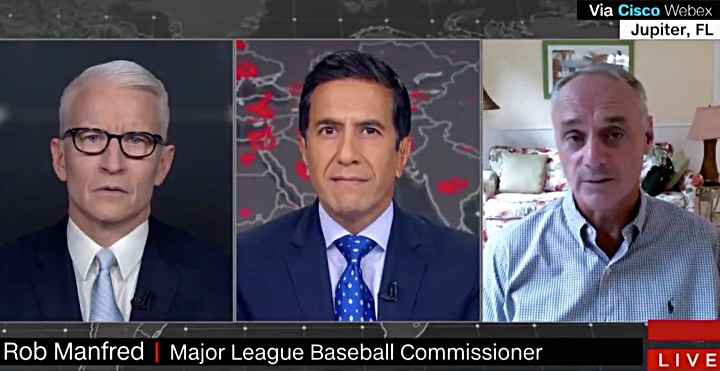 As Major League Baseball begins its discussion with the players on a plan to return to baseball in the months ahead, Commissioner Rob Manfred spoke to Anderson Cooper and Sanjay Gupta at CNN.

You can see the full video here:

“All of our players would be tested multiple times a week” for coronavirus, MLB commissioner Rob Manfred says on the efforts to bring baseball back. “That testing would be supplemented less frequently by antibody testing as well.”#CNNTownHallhttps://t.co/zU95g1FwYr pic.twitter.com/J1MKyc5AJ0

Among the notable comments from Commissioner Manfred, paraphrased:

Manfred would go only so far as to say he was “hopeful” that we will have some Major League Baseball this summer. The league is obviously making plans for empty stadiums, but all of those plans are subject to public health and safety.

Testing would be multiple times per week for players and personnel, supplemented less frequently by antibody testing. Plan to reduce the risk of transmission by shrinking timeline between tests and (and also results). The league has invested in converting the PED testing facilities in Utah into a COVID-19 testing facility, and have been assured of at least 24 hour turnaround on all tests. Also symptom analysis, temperature checks, etc., every day.

Experts have advised that a 14-day quarantine for all contacts is not necessary. Instead, a positive test means quarantine for that individual until they have two negative tests over a 24-hour period. For all contacts with that person, the league would conduct rapid antigen testing to get immediate results (though we know that those tests are in shorter supply, and also come with a 15+ percent false negative rate, per studies). Nothing is risk-free, Manfred noted. “We are trying to mitigate the risk.”

As for what happens if there are players who do not feel comfortable or safe coming back, Manfred said that of course no player would be forced to come back. But “We hope that we will be able to convince the vast, vast majority of players that it is safe to return to work.” He pointed to the “extraordinarily detailed” health protocols, which are 80 pages in length. Tiering of employees, isolation, limited access, limited numbers, rules for travel, etc. That’s all in addition to the obvious stuff that I’m sure you’d see in any business plan right now: social distancing, hand-washing, hand sanitizing, disinfecting, masking, and the like.

When asked about the optics about a money fight: Manfred said that although people tend to characterize these things as a fight whenever it’s out in the public, he doesn’t see it that way. “I have great confidence we’ll reach an agreement with the players both that it is safe to come back and also work out the economic issues.”

Has talked to the 18 governors in states where they play, most have expressed hope that teams could use facilities in those states in early July, without fans. The league has contingency plans if some teams have to play elsewhere. (It was unclear/unaddressed what the facility plans will be for Spring Training Part Two, which I suspect is because that’s one of those topics that is still up in the air in these negotiations – length, requirements, compensation, location.)

As for the economics, Manfred said that owners collectively stand to lose upwards of $4 billion this year if there is no season.